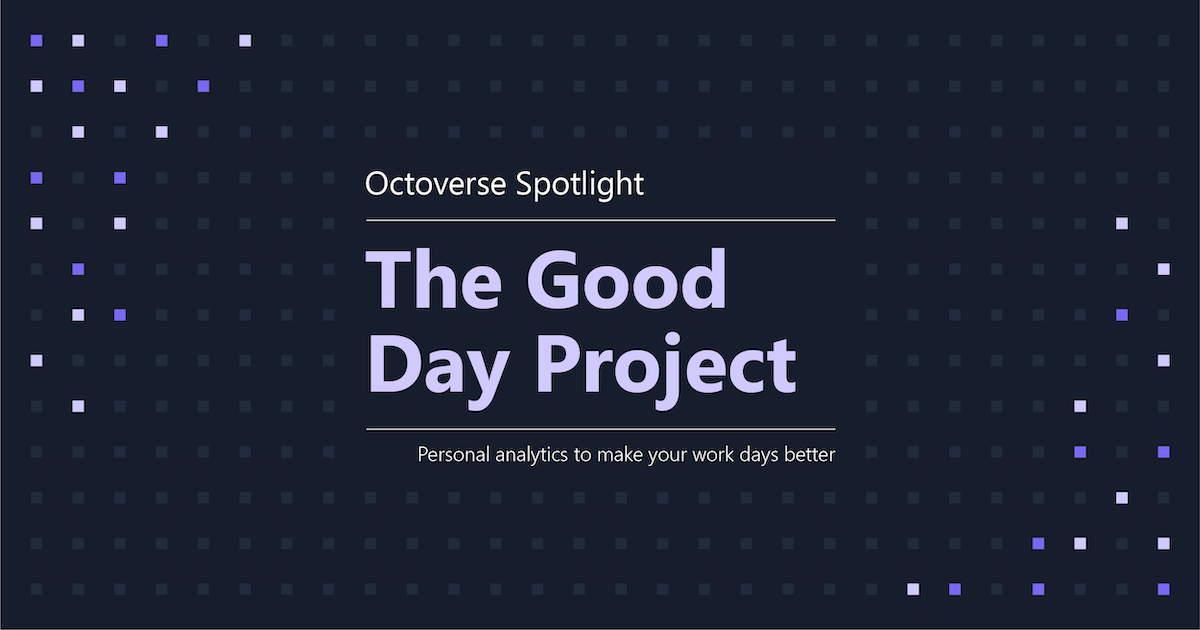 So much of our time and energy goes into our work days, and the past year has shown us the importance of balancing work and life when the lines between them blur. Developers want to make their work days better — and to make them better consistently and reliably. It feels great to get into a flow and have an awesome day or an awesome week, but can be frustrating to fall out of that flow and find ourselves looking back on our days wondering: what was it that made things “click” into place? Without some kind of consistent signal it’s hard to know what patterns make good days, and it can be a lot of effort to put the data and patterns together ourselves.

These questions prompted the Good Day Project, an internal to GitHub investigation into what helps developers have good days. Our study reinforces that productivity is personal, and shares tips that can be used by developers today — even without an automated solution or a tool like the one we’re experimenting with. This spotlight centers on three main findings: the impact of interruptions, the value of daily reflections, and the SPACE productivity framework. We include a discussion of seeing patterns in our work and what this means for you, as well as next steps for the project.

With the Good Day project we wanted to support developers in understanding their days. Developers’ work habits are malleable, but they could use more specific insights into how to improve them. So we tried a combination of collecting rich information about a work day, encouraging daily reflection, and presenting thoughtful patterns — through charts and commentary — to developers to prompt action. Here is what we found!

Interruptions and meetings have a large influence on our days

The efficiency or flow of a given day — in other words, interruptions and meetings — has an outstanding impact on whether that day is a good one.

Meetings were similarly a stumbling block. With an average of two meetings a day the chance of developers feeling like they made progress towards their goals was 74%. But stepping over that threshold to averaging three meetings per day meant a 14% chance of making progress — that’s a substantial drop! And when meetings were pushed down to an average of one a day? Developers had a 99% chance of doing quality work.

Not all meetings and interruptions are in our control to schedule, move, or avoid. And not all interruptions are bad — sometimes they give us time to rest and think. But too much interruption too frequently can make it hard to get our work done. Blocking times on your calendar and making yourself selectively (un)available were strategies the developers in our study tried in their own practice, and that they found helpful to minimize fragmentation and help reduce disruption.

Looking at what brings disruption to your day gives a deeper understanding and offers more ideas for taking action than simply looking at a contribution graph. How do meetings and interruptions affect your days? What techniques have you tried to limit or contain disruption?

Take a minute to reflect

When we launched the Good Day project we worried that developers would find the format — daily prompts to answer questions — tedious or disruptive, and that they would stop engaging. We found just the opposite! In addition to an impressively high response rate — 90% completion during the two weeks of daily surveys — developers, after the fact, told us they would have continued the study for twice as long.

Why would developers be willing to complete reports for four weeks? Turns out, the insights from the personal reports weren’t the only useful part of the experience. One of the core benefits developers got out of the Good Day project was developing the habit of self-reflection. It made them more mindful about their day as it was unfolding:

“It forced me to think about how my day is developing instead of just letting it develop and reacting to whatever happens.”

* The shaded cells are the most predictive items.

What distinguished Flowing days from Disrupted days was an average of less than three meetings a day and interruptions being contained to a small part of the day. Flowing days were also more likely to be rated as good days, so managing to safeguard our focus can help us have better days. Being able to make progress toward goals much of the day also impacted how developers felt about their days.

Tip: This research showed that developers feel good about their days by making just some progress toward their goals. Let’s remember this — having a good day is achievable and doesn’t require heroic efforts. Small steps to create focus time can add up to a large impact on our days.

Using the SPACE framework to create survey questions and measure developer days worked well. Both the questions and the response options we gave developers resonated with them and how they think about their days. The responses were normally distributed and included a full range of responses, suggesting an initial scientific validation. In addition, over 60% of folks said they were excited to complete the surveys every day.

In future work, we would continue using these questions, and may add a few more. The post-study feedback survey gives us a few hints about what directions may be useful. First, our participants said the survey wasn’t too long and wasn’t disruptive, indicating we could add one or a few more questions, which would provide better insights to developers. Second, developers also provided feedback that they were interested in adding a question about how they slept the night before, as well as adding the option for them to provide open-ended comments each day similar to journaling.

The developers in our study were overwhelmingly excited to see their personalized report. The report included several charts with commentary to help developers spot patterns and explore how they might use the information to improve their days. Here we show two examples taken from a sample report with simulated data.

Each report started with the developer’s split between day ratings: good and not-so-good days. Then, we presented a chart of their activity on github.com and their day ratings across each day they completed a survey. That way a developer could see if and how their volume of activity affects their day ratings — it’s a way to prompt developers to think if activity is the whole story for them. This chart was rated by developers as the easiest to understand.

Out of seven charts included in the report, developers found the one above most interesting. It shows a developer’s level of meetings, interruptions, and activity on github.com each day. You’ll also note that the days developers reported as Good Days were highlighted in light grey. This layout helped developers see how meetings and interruptions (measures of efficiency and flow from the SPACE framework) affect both their activity metrics and how well they felt overall that day — so it was a chart that was useful and included several pieces of information. Interest in this chart points to developers wanting to see and understand the effect of flow (or lack thereof) on their days. In our early interviews with developers, many shared that instinctively they believed that fragmented days don’t feel good or they find them less productive; the data from our study confirm their intuitions.

In addition to the smart charts and fun commentary, the Good Day reports were useful and valuable for our participants because they were personalized. This is somewhat unique because many metrics offerings for developers provide data that is aggregated at the team level. Our analysis showed that personalized, actionable insights are important, but they don’t come through in team-level metrics. A few developers in our study had almost opposite patterns — conclusions from the aggregate would be of little help in those cases as the unique patterns would be lost. This highlights that while team aggregations are useful for helping teams improve, only individual-level analysis can help an individual find the patterns to understand and make their days better.

With the Good Day project we wanted to help developers understand what makes a good day with as little friction and effort as possible. We love doing research — we’re researchers! — but we really love making developers happy. With that in mind, we also checked in to see how our participants felt about the project and how useful the reports were. How did we do?

A teaser to remember us by

In the Good Day project we experimented with an approach to bring personal analytics to developers and help improve their days. The developers in our study found it useful and our team also learned a lot — what questions work for daily reflection, how long daily reports can go on for, and what data is informative and supports self-improvement. Next we’re partnering with the Office of the CTO (OCTO) to continue our investigation and iterate on the idea. OCTO created a proof of concept for Hubbers to easily collect their own data, reflect on their work, and find out how to craft their version of Good Days. Check out the demo to see OCTO’s idea for a privacy-respecting, quick interaction using a Slack app and private repositories. We hope that after some dogfooding (or champagne drinking, pick your metaphor!), we can share something valuable and awesome to even more developers. The good news is that you can take steps to improve your days even without a fully automated solution or an elaborate tool —it just takes a quick daily reflection based on a few questions.

Many thanks to those who contributed to this project. Each is listed alphabetically (except authors, ordered by contribution). An additional thanks to our anonymous study participants. 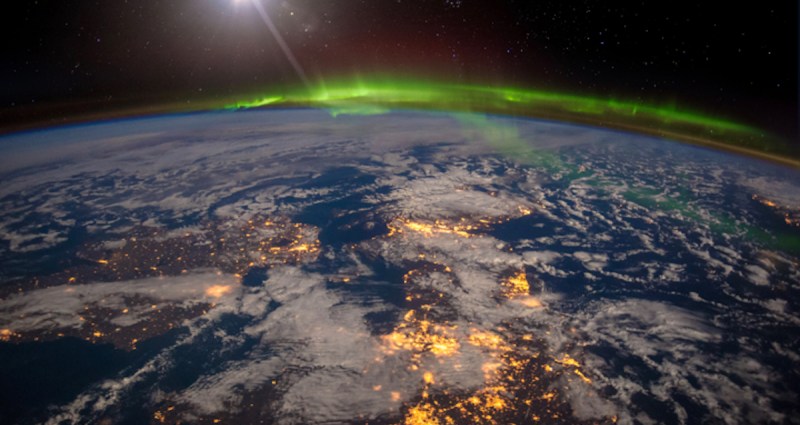