We’re sharing interviews from several open source contributors about their projects, challenges, and what a GitHub sponsorship means to them. This week, read about Mariatta Wijaya. 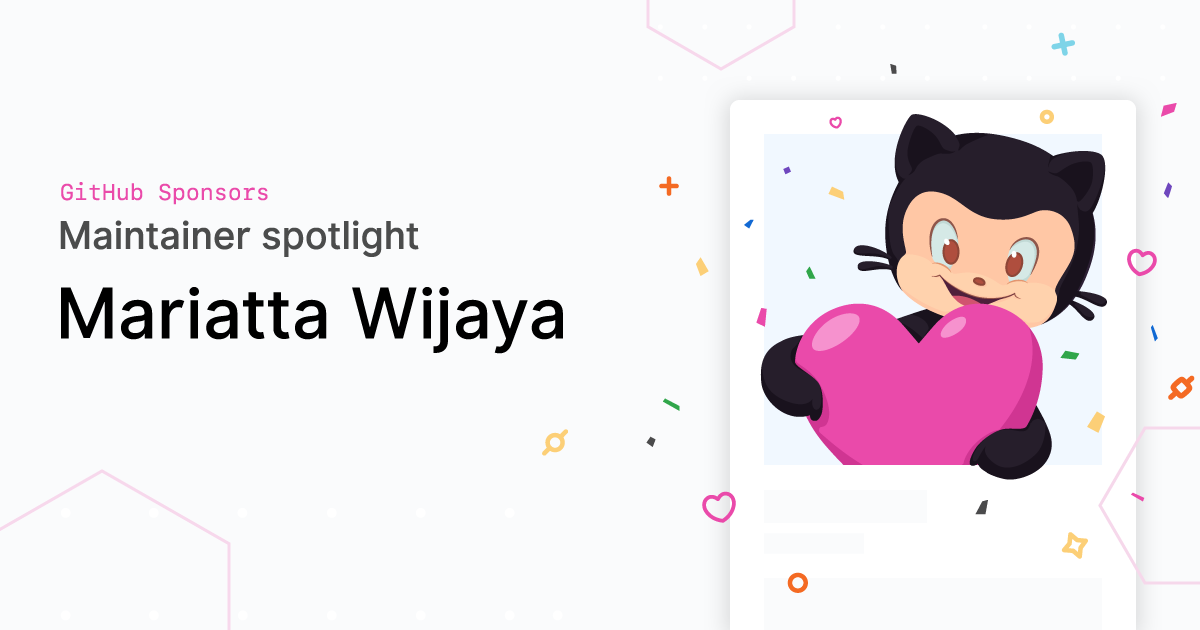 Mariatta Wijaya is a maintainer of CPython, miss-islington, cherry_picker.py, gidgethub, and aio-libs. After moving from Indonesia nearly two decades ago, she now lives in Vancouver, Canada with her husband and two children. Mariatta has been a developer for more than 15 years, and about 10 years ago she started to learn how to code using Python. She currently works as a Backend Engineer with Zapier. Aside from code, she loves food and traveling.

As a Python core developer, I help maintain CPython (Python programming language), as well as the tools and GitHub bots used in CPython’s core-workflow. I’m also helping to maintain other open source projects, like gidgethub, an async Python library for calling the GitHub API. Recently, I started working on a GitHub bot for the aio-libs project.

I was inspired by Guido van Rossum’s keynote at PyCon 2015, where he said that there weren’t any women Python core developers. A year later, in 2016, Guido gave another keynote with the same message about how many underrepresented groups were missing from the experience, and there still weren’t any women core developers. This made me realize that there are certain barriers to entry faced by women and minorities in open source. I felt sad about the fact, but also challenged—I wanted to do my part in the community.

After I started contributing to Python, I realized how rewarding it could be. I try to contribute back to tools and libraries that I use whenever I can. Brett Cannon’s gidgethub is one of those projects that I love using to build GitHub bots for Python. When I first started using it, I encountered issues and it was lacking a few features. Instead of opening an issue and hoping a feature or fix would be implemented, I made the pull requests myself and helped review other pull requests. Brett noticed my efforts and added me as a collaborator to the project.

What do you think is the biggest challenge open source faces?

Many open source maintainers, like myself, are only able to contribute to open source in their free time. It makes contributing a privilege. This is a problem when planning for long-term sustainability of open source projects, and it’s a contributing factor to the lack of diversity and representation in open source.

I get exposed to various challenges and use a different set of skills and tools that I don’t often get to use outside of work. It’s been liberating to be able to challenge myself without many constraints or strings attached. I also get to work with a lot of people in the community from all over the world, which has helped me learn how to communicate more effectively.

We all share the responsibility to better support open source and its maintainers. Maintaining open source projects often involves more than the time spent writing code but also includes tedious administrative work, infrastructure, emotional labor, and a lot of challenges that you never expected.

I want them to know that their sponsorship will go a long way. In addition to contributing and maintaining open source projects, I’m actively involved (and volunteering) in the wider Python community:

Sponsoring me means that I’m given the necessary support to continue my work in both the open source and tech communities. As a member of a traditionally underrepresented community, this may not have been possible without sponsors.

Want to learn more about featured sponsored developers? Check back soon—we’ll be adding new interviews every week. If you have ideas about how GitHub Sponsors can better serve the open source community, send us an email