The State of the Octoverse: communicating with emoji on GitHub

To get a sense of how our community expresses themselves with emoji, we looked at which ones they use in (and in reaction to) issue and pull request comments. 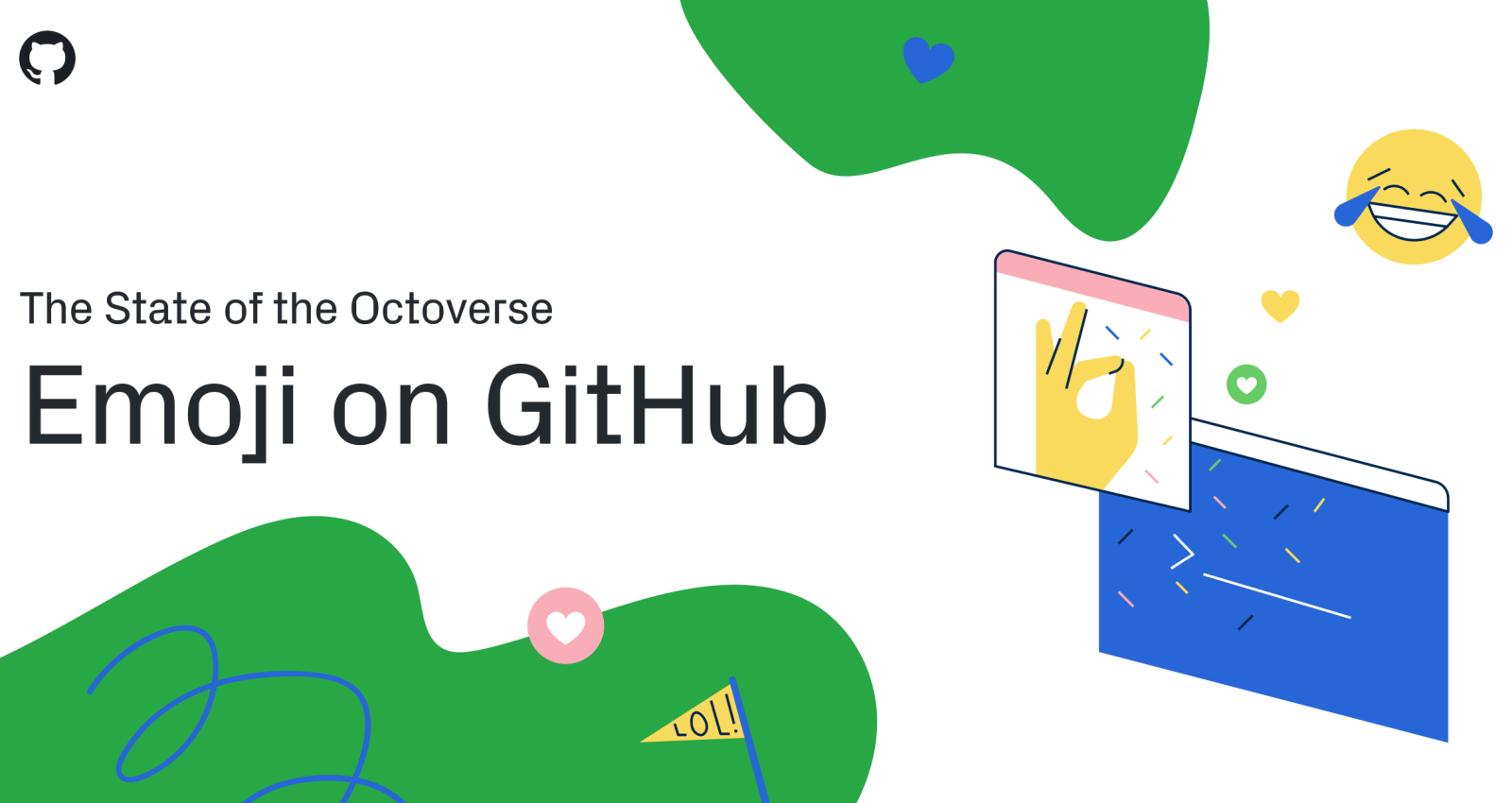 On GitHub, developers can express themselves in their preferred medium: words, code, or tiny cartoon images if they choose. To get a sense of how our community expresses themselves with emoji, we looked at which ones they use in (and in reaction to) issue and pull request comments. Our data on emoji reactions covers public and open source repositories between October 1, 2017 and September 30, 2018.

To learn more about our numbers and methodologies, check out this year’s Octoverse report.

In 2016, we released emoji reactions to quiet the noise of contentless issue and pull request comments like +1. So how are you using reactions today?

Expressions of approval and celebration make up the most of your reactions. In fact, you’re giving the 👍 and celebrating with a 🎉 more than anything else. 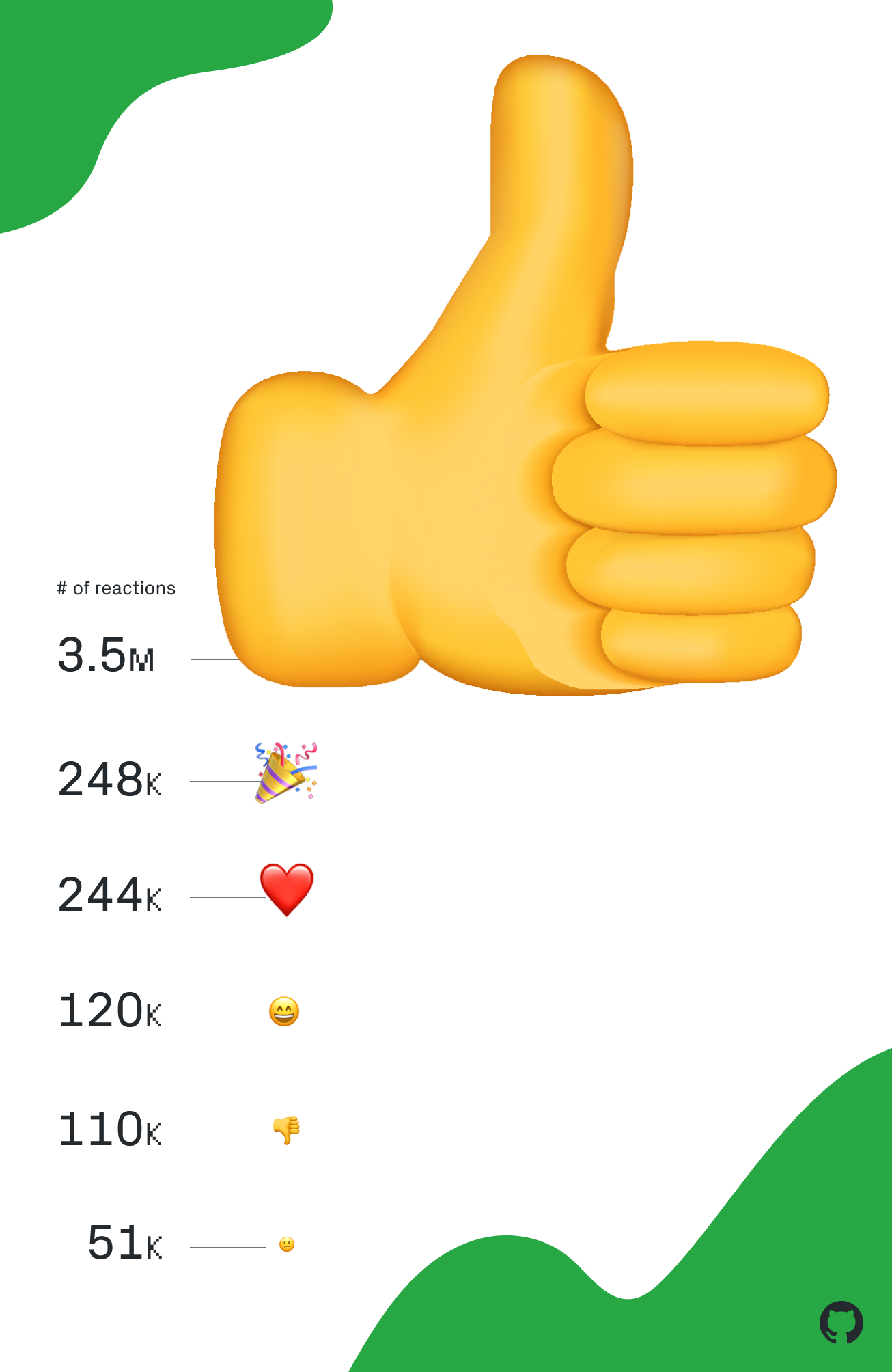 Percent of reactions by emoji type and programming language

Looking at projects tagged with a primary programming language, we can see which emoji language communities use most. Comments in Ruby projects had the most ❤️s, and C# users are casting nearly double the 😕s as any other group.

Geographic trends in reactions by continent 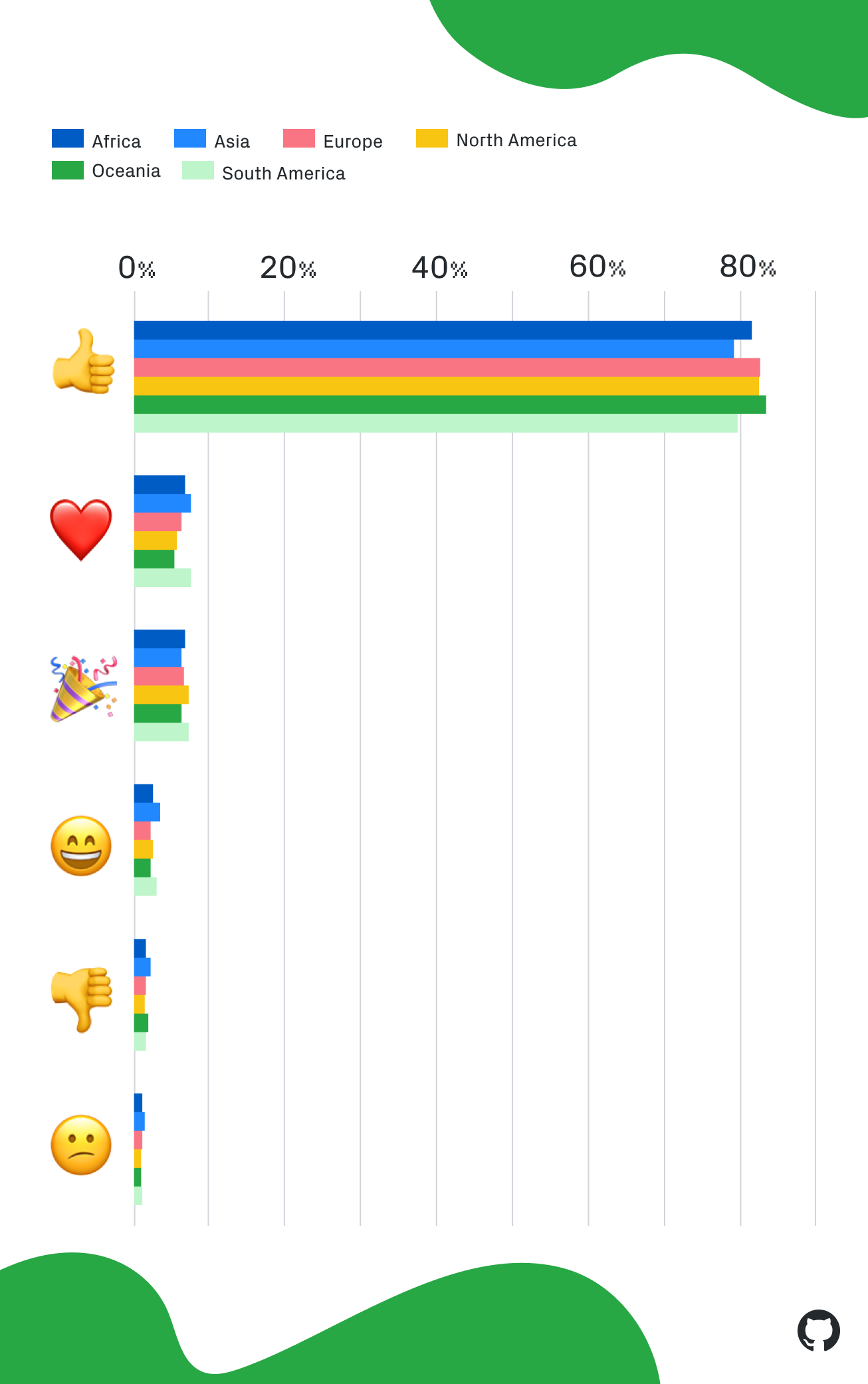 Beyond programming communities, geographic trends demonstrate how far some emoji reach. No matter their location, developers react to build consensus and to say, “job well done”. For all of our differences,👍 is the most widely used reaction across continents. Similarly, more negative emoji like👎 and 😕 are used less often, suggesting that sometimes, harder conversations require more words.

Zooming in, Japan spread positivity by reacting with more 😄s and ❤️s per user than any other country. And developers in the Czech Republic have something to celebrate. They reacted with the most 🎉s on average.

You’ve reacted to public comments on topics from managing code to managing depression, expressing laughter, thanks, and support. In the last year, you:

Five emoji could never fully represent the complexity of human emotion. When a 👍 isn’t enthusiastic enough, you often post a 🚀. In the last 12 months, the GitHub community created almost 10,000+ issue comments containing no other content but this tiny craft. That’s a lot of warp-speed shipping.

Together, you’re using emoji to transcend borders, get work done, and express playfulness, agreement, and a whole lot of ❤️. We can’t wait to see what new trends in tiny images are up next.

Stay tuned for more posts that dive in data on the GitHub Blog—or check out our reports on projects and programming languages to see what a community of 31 million developers can accomplish in a year.