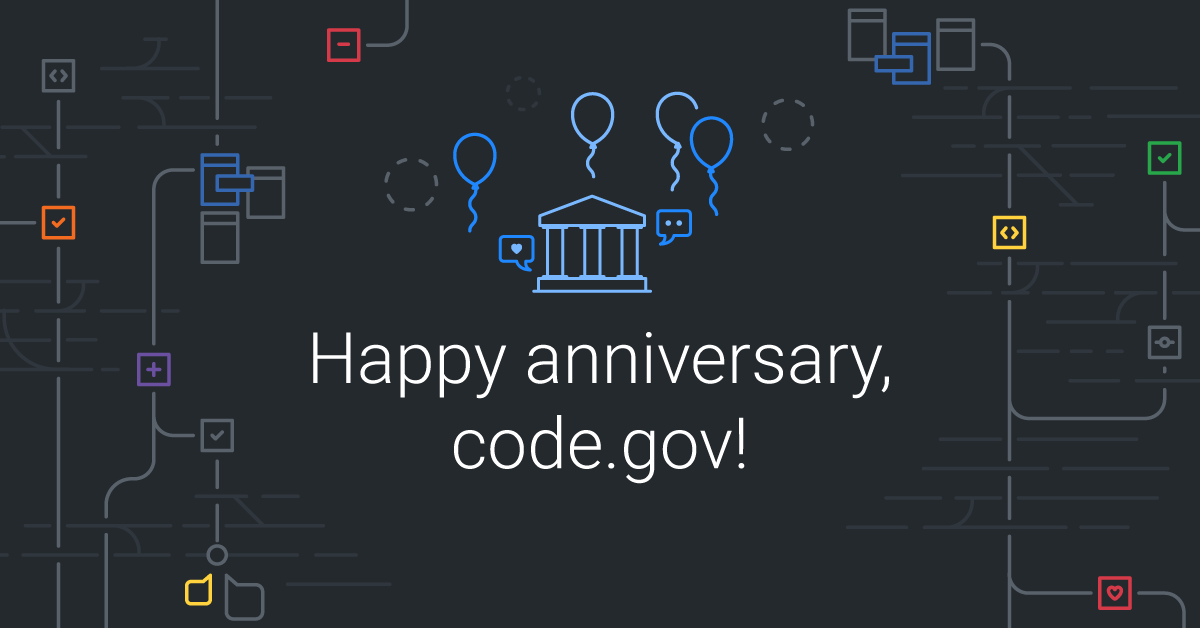 As we celebrate Code.gov’s second birthday, it seems like just yesterday Alvand Salehi was introducing Code.gov from the main stage at GitHub Universe. But now two years and over 5,200 projects later, Code.gov (and the Federal Source Code policy that created it) are starting to hit their stride. I wanted to take this opportunity to highlight some of the exciting government projects currently on GitHub, and dive into the data around how the government community uses GitHub to collaborate. Like the Code.gov team says, “[we] believe in innovation, and are passionate in making these open source projects all available to you.”

Out of the 4,800 publicly accessible government projects on Code.gov, more than 3,600 (or 75 percent) are hosted on GitHub.com. This makes sense, as the majority of the world’s open source already on GitHub. However, it’s also a pretty big deal. Government agencies like NASA and the U.S. Army are using GitHub to share their tools and resources with the greater open source community around the world. Take NASA’s 3D Resources project, for example.

Interested in textures, models, and images from NASA itself? The NASA-3D-Resources repository has it all, including pictures of earth from the Apollo missions and models of the satellite used in the Clementine mission.

You can’t 3D print your own Mars rover—yet. But with contributors like the NASA Jet Propulsion Laboratory and NASA Goddard Space Flight Center, “yet” may definitely be the operative word.

Another exciting government project is ZFS, a file system released by the Department of Energy that runs specifically on Linux. This open source project has not only been embraced by other agencies, but has been adopted by private companies as part of their day-to-day operations.

Notable adopters of ZFS on Linux include GE Healthcare Systems, Intel, and Netflix. As for the Lawrence Livermore National Laboratory (LLNL)—the research facility answering to the Department of Energy and those behind this OSS—they continue to utilize ZFS, and continue to develop and improve the platform. LLNL is working closely with Intel to use a variation of ZFS-ZFS+Lustre—to manage the first planned U.S. exascale system, Aurora. Aurora is capable of a billion-billion calculations per second. (Yes, a billion-billion.) Aurora is slated for 2021 at Argonne National Lab.

How the government community uses GitHub

Aside from how the government is sharing projects, we also took a look at the numbers to find out how the community is using GitHub to collaborate on these projects.

Our top 10 findings are just a few examples of how government projects use GitHub. Looking deeper into the data can tell us even more about how they contribute to the entire open source community. With thousands on thousands of commits, many have sparked the attention of both the public and private sector:

This is what Code.gov is all about. All of the government projects we’ve mentioned in this post are designated as open source. That means that you can access a repo, test, debug, submit pull requests, or download your own copy and adapt it for your own use.

As the Code.gov team has shared with us, they believe in innovation and providing everyone the opportunity to perform a civic duty on a digital platform. They’re passionate about making these open source government projects available for all. This spirit is embodied in their hashtag, seen often on their Twitter account: #CodeOn. The invitation to reach out to them on Twitter or LinkedIn is always open, and we highly encourage you to do so.

Want to learn more about Code.gov? Follow them on Medium and Twitter. You can also see what else GitHub is doing to help governments across the country and around the world.

Open source helps people create new and exciting things every day—including the code we used to collect data for this post. Check it out here.