Thank you for 100 million repositories

We reached a major milestone. Thank you to 31M+ developers for creating 100M repositories now live on GitHub. 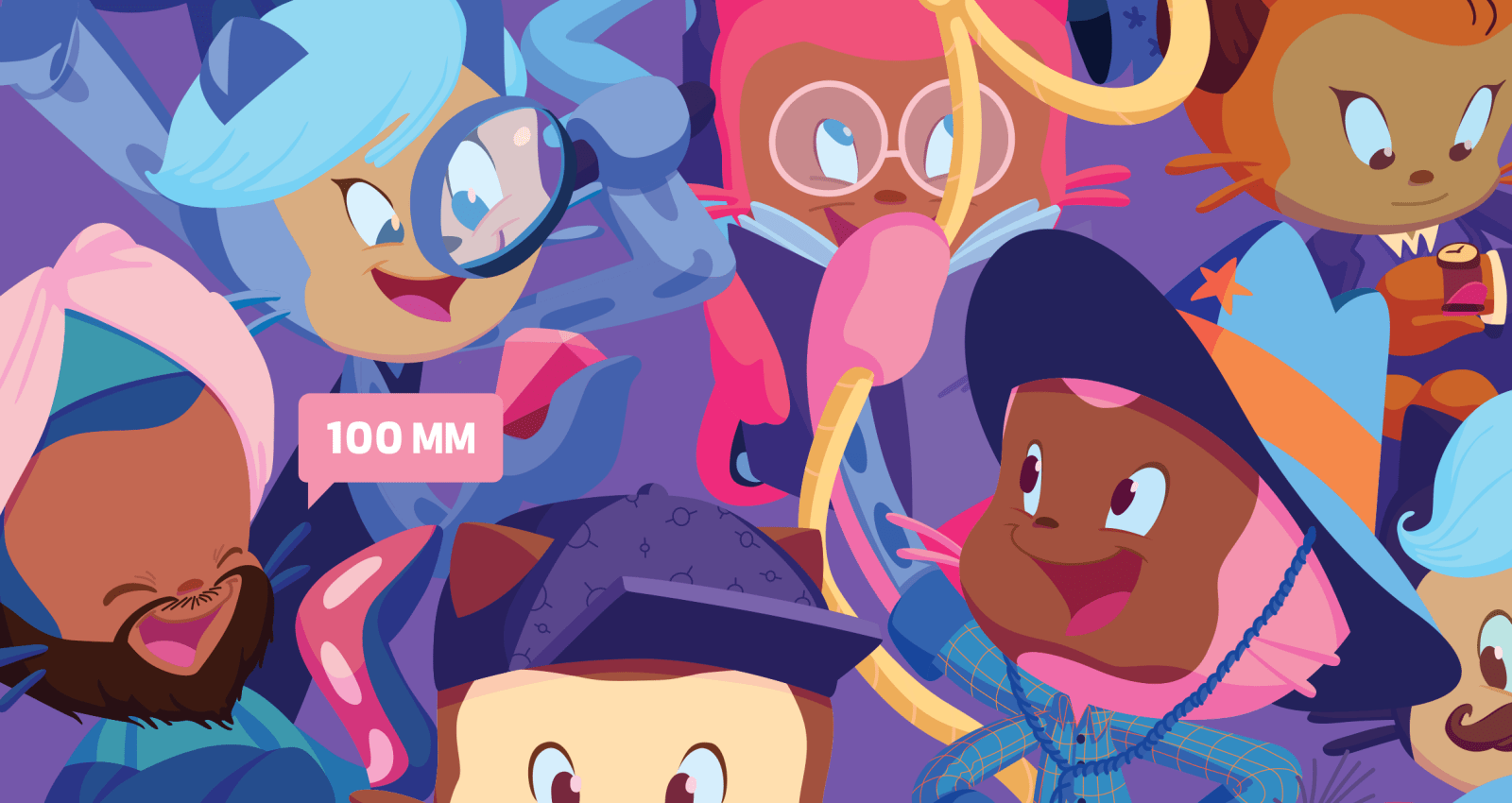 Today we reached a major milestone: 100 million repositories now live on GitHub. Powering this number is an incredible community. Together, you’re 31 million developers from nearly every country and territory in the world, collaborating across 1.1 billion contributions.

Repositories are where you store code, but they represent much more: ideas, experiments, curiosity, and moments of inspiration. To celebrate, let’s take a look at a few trends and achievements, a core sample of what’s possible when we work together by the millions.

To put this milestone into perspective, we totaled only about 33,000 repositories in 2008. Today, we’re seeing an average of 1.6 repositories created every second. In fact, nearly one third of all repositories were created in the last year alone—all thanks to the developers who choose to host, build, and share their work on GitHub.

Over the last 10 years, it’s been a pleasure to watch impactful projects build and grow on GitHub. Rails moved to Git and GitHub while the platform was still in private beta, and Node.js launched on GitHub in 2009. Since then, we’ve also had the opportunity to host Swift, .NET, and Python. Supported by thousands of contributors, these projects are raising the bar for how developer tools evolve and engage with their communities.

Projects on this year’s lists have a theme: they make it easier to build software, whether through code editing, automation, containerization, or documentation. 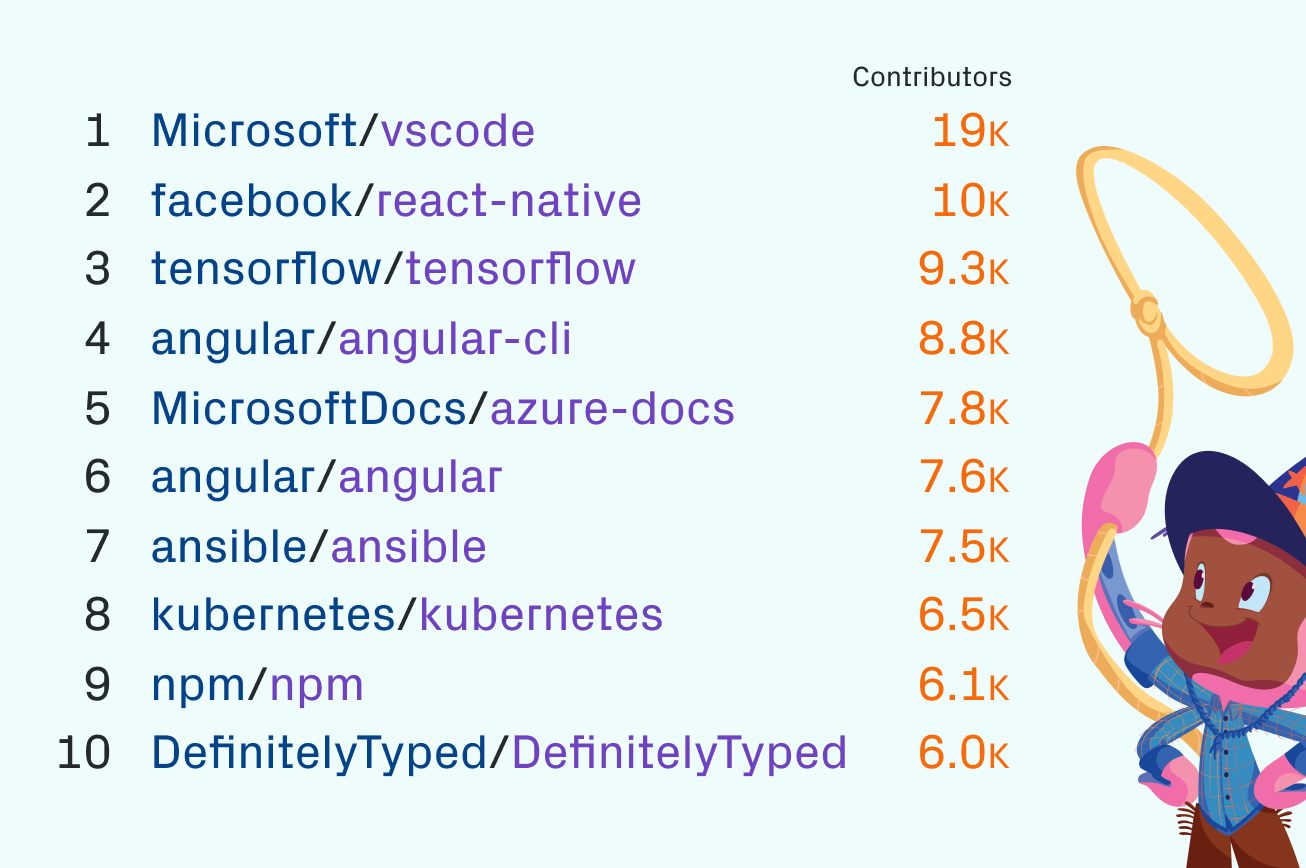 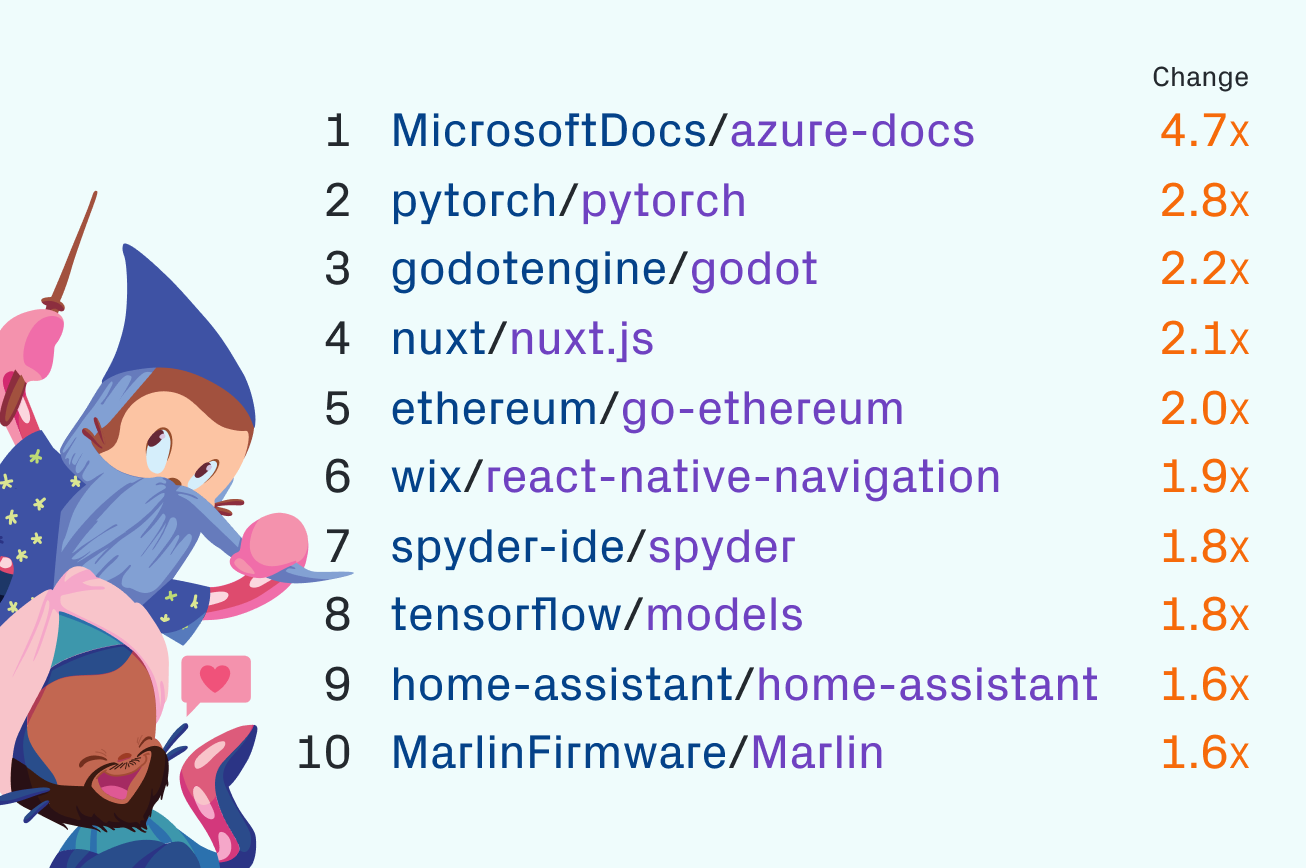 This year, the open source repositories you’ve created span thousands of topics, but these are the ones you contributed to the most: 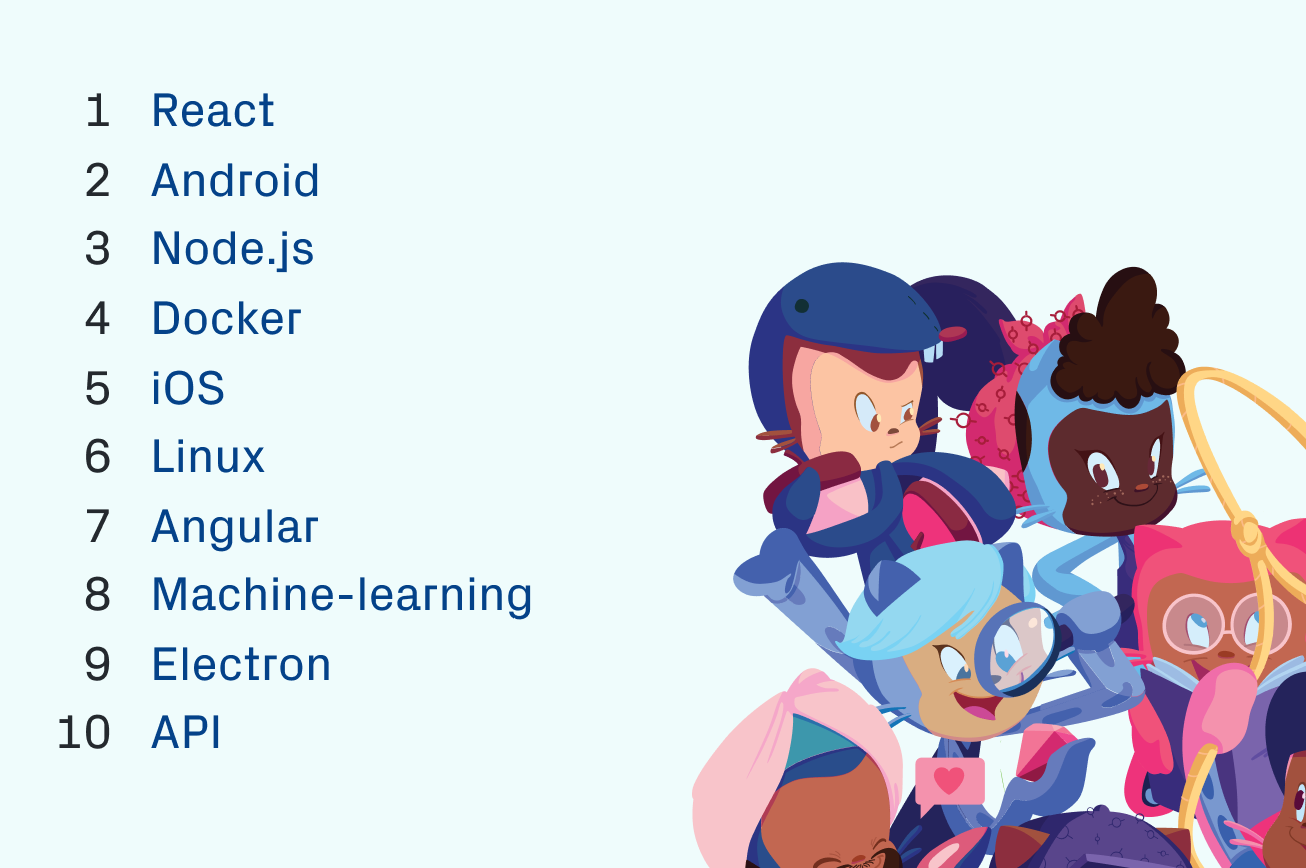 Topics in front and backend JavaScript, machine learning, mobile app development, and containerization represent some of the most powerful trends in open source software in the last 12 months. In 2017, topics like “game”, “deep learning”, and “library” were also trending.

Where repositories are created

GitHub started with a small group of developers looking to solve a specific problem—now it’s home to a global open source community. And we’re seeing the proportion of open source contributors outside the U.S. grow every year. 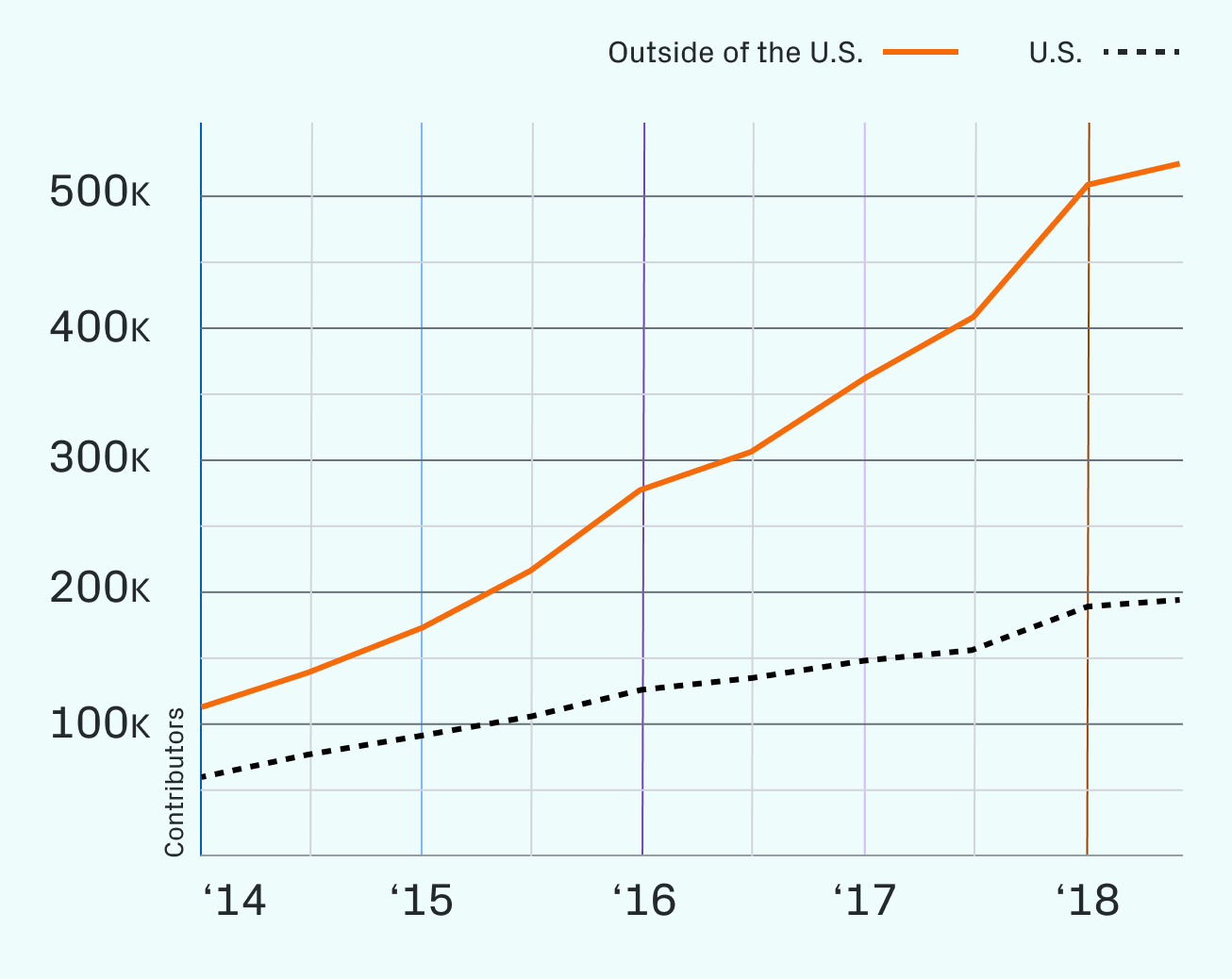 As a continent, more repositories are coming from Asia than anywhere else in the world. More specifically, repository creation has picked up across Central Asia, the Middle East, and Africa. While there’s an increase in repositories from developed countries, we’re seeing the same trend in emerging countries as new tech communities grow and new technologies becoming more accessible.

Developers in Egypt, in particular, created twice as many public and private repositories this year. And in Nigeria, a growing developer community created 1.7x more open source repositories in 2018 than in 2017. To see why we think Nigeria has a tech community to watch, read our latest post on the region.

Fastest growing countries by repositories created (as of September 30)

After 10 years and 100 million repositories, we’re only just getting started. Thanks to our users, we’re building something bigger than any single repository or project—a community that’s pushing software forward in tangible ways. So thank you for building with us now and in the years to come. We can’t wait to see what you build together in the next 100 million.

Interested in seeing more insights into the GitHub community? Check out this year’s State of the Octoverse report.