The end of the year is getting closer, and our communities are busy working away on their projects. While you've all been busy maintaining open source projects and shipping releases,… 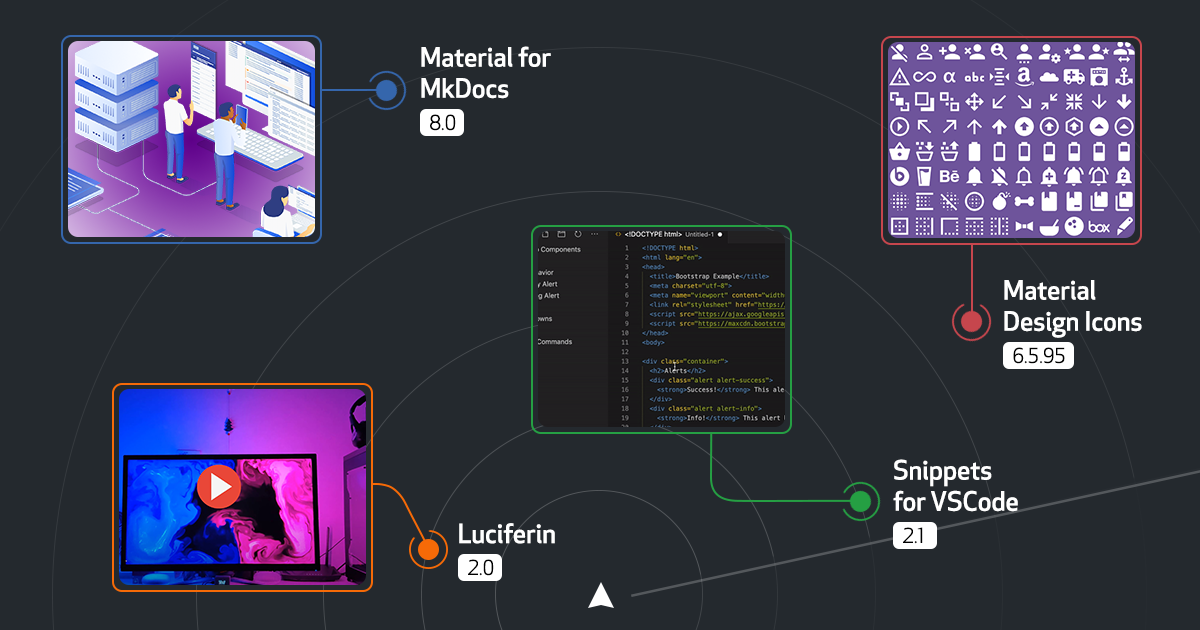 The end of the year is getting closer, and our communities are busy working away on their projects. While you’ve all been busy maintaining open source projects and shipping releases, we’ve created a new open source repository too! More about that at the end, but for now, let’s check out our top staff picks from open source projects that shipped major version releases during November. There’s everything here from huge open source projects, to weekend hobbies.

Documentation is something everyone needs to think about when creating software. Good documentation helps developers and users understand what your product does, troubleshoot, and more. Material for MkDocs takes your markdown files and creates a branded static site for your documentation. The latest version supports lots of new features such as code annotation. Check out all the changes in the Material for MkDocs release notes.

We’ve featured lots of PHP related projects in previous Release Radar posts. PHP is a popular general-purpose scripting language. Whilst this might not look like the typical major release, PHP has implemented several big changes since version 8. Their latest breaking updates include lots of new features such as enums, readonly properties, first-class callable syntax, fibers, intersection types, as well as performance improvements and a bunch of deprecations.

🔗 Read all about it at: https://t.co/ToeHc3YGau

🐘 Many thanks to the contributors for everything they implemented, and the RMs to get this amazing new version released!

We can’t go past talking about a PHP project after PHP just got a big update. PHPStan is a static analyser for PHP codebases. It acts as a compiler for the language and finds bugs before an app is even run. Congrats to the team on shipping their first major release after six years of development 🥳 You can read all about the project, this big milestone, and see some of the limited edition SWAG for sale on the PHPStan blog.

PHPStan 1.0 is out! With brand-new level 9 (it’s brutal), dozens of improvements accumulated over the past 1½ years, backward compatibility promises for both users & extension developers, and a bright future! https://t.co/UmBtehHhn9

Snippets for VS Code 2.1

VS Code is one of the most popular code editors around. Snippets for VS Code is an extension allowing developers to play with code snippets without quitting the editor. Snippets will be synced across all your devices using VSCode. While 2.1 might seem like a smaller release, this is the first version shipped as a full release. Congrats to the team on moving out of pre-release.

Need some cool icons for your open source project? Material Design Icons has thousands of community-created icons for lots of projects. Version 6.5.95 seems like a really random number, but it’s actually the total count of icons. Since the last version of icons was shipped, more than 100 new icons have been created. The total count is now 6595. Check out all the icons on the website. Even Home Assistant makeS use of these icons.

We featured PyGame on last year’s November Release Radar. They are now on their 21st birthday, and many game devs are still using PyGame. Many entries for the GitHub Game Off often utilise PyGame. Over the past year, PyGame has received a bunch of updates. These include support for M1 Macs, better Linux support, regression fixes, and more emoji rendering 🍂🍊🌰🥮🥧 This is also the last version of PyGame likely to support Python 2. Read the release notes for all the major changes.

One of Facebook’s (now called Meta) biggest open source projects is React. It’s a JavaScript library for building user interfaces. React version 18 moved into beta just this November. Along with this beta release comes significant improvements including new APIs. This is likely to be the final release for React 18.0, and the community welcomes beta testing. You can read more about this on the React Discussion, and get involved.

RGB and smart lighting is becoming more prevalent—from home offices, to fancy events, gaming, and entertainment. Luciferin is a project with two parts. The first is Firefly Luciferin, a Java Fast Screen Capture software. The second is Glow Worm Luciferin, the C++ Arduino firmware. Using these two components, users can create bias and ambient lighting. If you’re into lighting effects, check out the Luciferin project. Luciferin works on Windows and Linux, with a macOS version on its way. This latest release features a new web interface, where you can control your lights from the browser! 💡

About a year ago, many communities on GitHub, and the wider git community, started renaming their default from master to main. By default, all new GitHub repositories now have the default branch set as main. But what if you have some older projects? Master to main helps you solve this problem by checking if a GitHub user or org has any public repos that still have “master” as their default branch. It then provides helpful material on how to update this. For more information on updating or renaming a branch, check out the GitHub Docs.

Well, that’s all for this month’s top release picks. Congratulations to everyone who shipped a new release, whether it was version 1.0 or version 18.0. Keep up the great work everyone! If you missed out on our last Release Radar, check out the amazing community projects from October.

We hope these releases inspire you to get involved in open source or update your latest project. If you are working on an open source project and are shipping a major version soon, please get in touch. You can now check out our new Release Radar repository, and submit your project to be featured on our blog. Also, don’t forget our new auto-generate release notes feature so you can have all your release notes created for you.