The theme for this year’s Game Off is… ...BUG! Your challenge, should you choose to accept it, is to create a game between now and December 1 incorporating the theme…

The theme for this year’s Game Off is…

Your challenge, should you choose to accept it, is to create a game between now and December 1 incorporating the theme somehow, and submit it to the jam page on itch.io. After a few weeks of playing and rating the games by participants, the winners will be announced shortly thereafter.

As usual, you may interpret ‘BUG’ however you wish …

Or go rogue and ignore the dictionary:

Note: Nobody’s judging the code quality, so lots of bugs are both expected and accepted. Focus on having fun 😉

Good luck, have fun, and sign up now if you haven’t already! <3

Help—I’ve never created a game before!

With so many free, open source game engines and tutorials available online, there’s never been an easier (or more exciting!) time to try out game development. Are you…

Find a language you love (or want to learn), and build any kind of game you want: platformers, roguelikes, shoot ‘em ups, text adventures—anything you like. We’ve even had some NES and C64 games submitted over the years 🤯

Have a question about game development? Jump into the Game Off community forum on itch.io, or ask in the Game Off Discord server.

Highlights from Game Off 2020

Game Off is our annual month-long game jam. This year’s theme was “moonshot,” and there were more than 500 tre-moon-dous submissions! 🌛 Here are some of the top-rated games as… 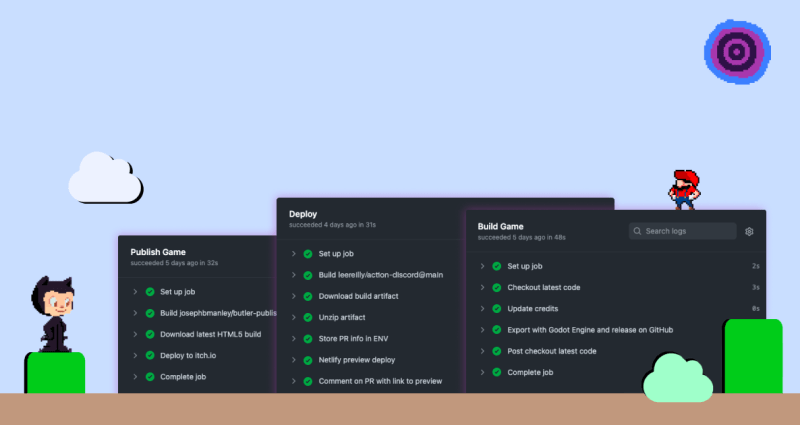 A Little Game Called Mario is an open source, collectively developed hell project. Anyone and everyone is welcome to contribute their unique talents to make both the player and developer experience more enjoyable. Find out how the collective leverages GitHub Actions to manage this wonderful little community.