It's been a busy time of the year for our Hubbers (GitHub employees). We've been shipping products, getting ready for launches, and taking some much needed time off for the… 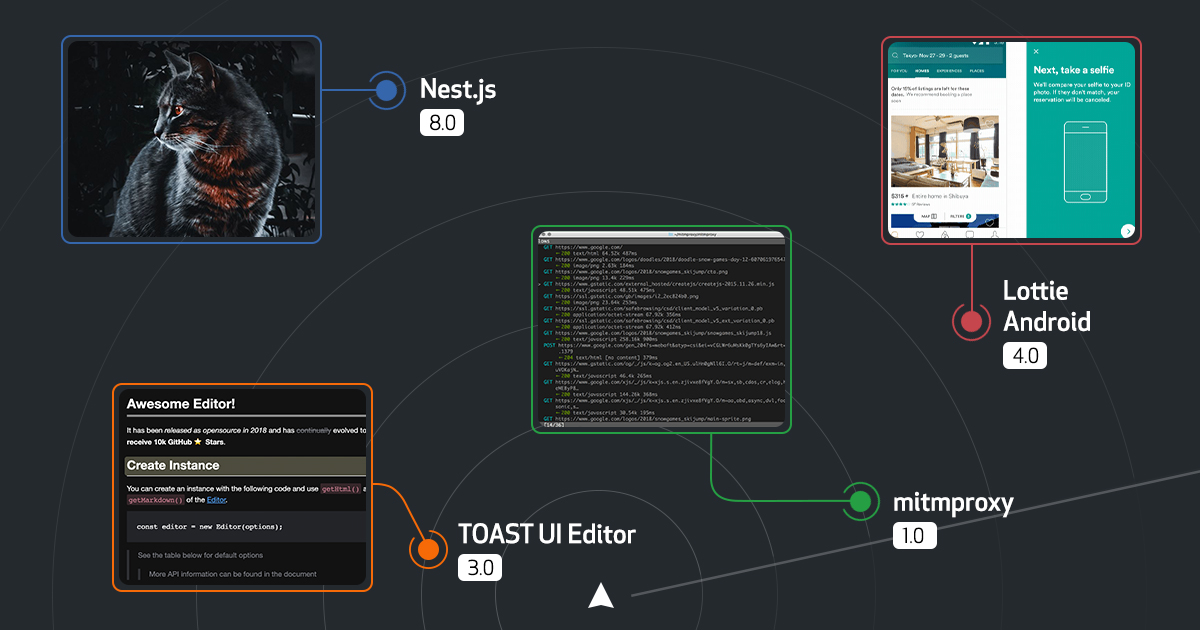 It’s been a busy time of the year for our Hubbers (GitHub employees). We’ve been shipping products, getting ready for launches, and taking some much needed time off for the summer. Well, it’s summer for those US/UK-based Hubbers, but some of us are in Australia where it’s cold! While we’ve been launching awesome features like GitHub Issues and Desktop 2.9, our community has been shipping lots of new updates. These new releases include everything from world-changing tech to weekend hobbies. Here are some of our top staff picks from amazing open source projects that shipped major releases this June/July.

This is an exciting one for the open source community. Terraform is now available to the general public. Terraform is a tool for building, changing, and versioning infrastructure safely and efficiently. Made by Hashicorp, Terraform is built to help you manage your workflows. Whilst Terraform has been around for a while, with over 100,000,000 downloads, Terraform 1.0 is a huge milestone for the team. Hashicorp has four requirements for a product to be released as Version 1.0: General Availability. The product must have been deployed broadly with many years of production, it has to have major use cases that are understood and supported, have a well defined user experience, and the technical architecture of the product must be mature and stable. Terraform met all these requirements and is now here for you. Download it now, or check out the Hashicorp blog for more info on Terraform GA.

Another huge one for the open source community is PostgREST. PostgREST serves a fully RESTful API from any existing PostgreSQL database. It’s fast, clean, and compliant. Version 8.0 of this product comes with a tonne of upgrades. There are a lot of added features such as allowing https status override, schema cache reloading, and config file loading. There’s no longer any down time when reloading the schema cache and there are now CLI options for debugging. And that’s not all. Read up on all the changes and bug fixes in the PostgREST release notes.

As the web evolves (remember the days of monochrome, single page, Times New Roman websites?) so too does testing. Cypress is a tool for testing anything that would run in a browser. It’s fast and reliable, plus it’s available on Mac, Linux, and Windows. With version 8.0, the team made some changes to help ensure a consistent run experience across all browsers. The new update means when you test your product on the web, it will be run in a standard, default format. There’s also a few new features and the usual bug fixes. Read more about these changes and how to migrate your code to Cypress 8.0 on the Cypress docs page.

Speaking of the web, if you want a free and open source HTTPS proxy that’s also interactive, mitmproxy should be your pick. The team just released Version 7.0, which comes with a new proxy core. This means lots of improvements and changes. Mitmproxy now supports proxying raw TCP connections and will accept HTTP/2 requests and forward them to the HTTP/1 server. Neat! There’s also the console UI, which is now available natively. Read up on all the changes that come with Mitmproxy 7.0 on the mitmproxy changelog.

Understand your users’ experiences with rrweb. Rrweb records a web session and replays it with user interactions. It’s perfect for understanding UX, reproducing bugs, demoing your product, or collaborating in real time. This project is now generally available as Version 1.0. Congrats to the team on shipping their first major release.

If you’ve ever tried using fancy Adobe effects in videos and transferring them to an app, you’ll know it’s super painful. Well, Lottie changes that. Now, you can create amazing animations and ship them right away. Lottie is a mobile library for Android and iOS. It parses Adobe After Effects animations, exports them as json files and renders them natively on mobile. With Lottie Android 4.0 comes the first stable release of Lottie Compose, which allows you to do all the fancy things with your json file. Fun fact, Lottie is made by Airbnb!

Who doesn’t love doggos? Husky improves your git commits with more “🐶 woof“. We assume the “woof” here means linting your commit messages, running test, linting code, and more. Whenever you push your code, Husky supports all things git. Version 7.0 comes with some improved directory structure, updated CLI, and dropped support for Node 10—make sure you’re up to date. Check out more in the release notes.

Like it’s namesake, Kratos helps you quickly build a bulletproof application from scratch. That’s definitely what the Greeks did right? Kratos is a Go framework for microservices. Version 2.0 comes with a lot of new commands, examples, and bug fixes. Read all about them in the Kratos release notes. Fun fact: this project’s name takes its inspiration from God of War the video game! That game, in turn, is based on Greek mythology—hence Kratos, the god of strength.

Did someone say cookies? 🍪 Not all cookies are bad for you, and JavaScript Cookie is one of those cookies that are good. This is a lightweight JavaScript API for handling cookies. It works in all browsers, with any characters. Version 3.0 has a lot of updates. They’ve also dropped support for older versions of Internet Explorer (IE 10 and below), as well as Node (Node 12 and below). Check out all the updates and changes on the JavaScript Cookie release notes.

This is what it sounds like! html2canvas is a JavaScript HTML renderer that allows you to take screenshots of webpages. The script renderers the canvas as an image and reads the various elements in that image. This is the first release of html2canvas and you can download it right now. Congrats to the team on shipping the first release of their product!

Do you use React Native and need a camera module? React Native Camera is the module for you. It’s a comprehensive module that supports photos, videos, face detection on mobile (Android and iOS), barcode scanning, and text recognition. Version 4.0 sees the migration to Google Machine Learning (ML) kit. Check out React Native Camera and try it out for yourself today. I hear the project is also looking for maintainers, so if you’re ever thought about getting into open source or maintaining a project, now is the time.

ws, or WebSockets have released a new version of ws, a Node.js library. It’s a simple and fast WebSocket client and server implementation. Version 8.0 has lots of breaking changes including UI changes to help developers debug even easier. The WebSocket constructor will provide SyntaxErrors based on a number of invalid protocols, helping you determine the cause of any issues. With this latest update, you can also migrate existing code by decoding the buffer explicitly, or closing connections manually. Plus, there’s the usual bug fix 🐛. Check out all the changes on the WebSocket Changelog.

If you’re looking for a cryptographic hash function, look no further than BLAKE3. It’s fast, secure, and contains one algorithm with no variants. BLAKE3 contains three official implementations including the blake3 Rust crate, b3sum Rust crate, and C implementation. This is the first major release of BLAKE3 so massive congrats to the team on releasing version 1.0. Read more about this project on the BLAKE3 readme file.

Not everyone likes doing documentation. If you’re one of those people, you might like TOAST UI Editor. This editor allows you to edit Markdown files using text or WYSIWYG. There’s also the added benefit of syntax highlighting, scroll-sync, previews, and charts. With the release of 3.0, there are a lot of bug fixes, plus some dependency updates. Check out all the changes on the Editor Changelog.

There’s always a lot of talk about Node.js for these Release Radars, and this edition is no different. Nest.js is a progressive Node.js framework for building efficient and scalable server-side applications. It uses modern JavaScript and is built with TypeScript. Version 8.0 has lots of features, improvements, fixes, and more. New features include the addition of new classes and a RouterModule. Read about these new classes, fixes, dependencies, depreciations, and improvements on the Nest.js release notes.

Do you want an open source alternative to Firebase? Supabase is your answer. Supabase has just released Supabase Auth 2.0, which allows mobile login. As part of this new launch, users can now login using passwordless SMS based OTP with supabase-js or with the Auth API directly. Users can authenticate their Supabase by verifying OTPs, and using Phone Auth in conjunction with a password. Supabase already supports Twilio as an SMS provider with more options said to be on the way. If you want to know more about Supabase, check out our Open Source Friday chat with Paul Cobblestone:

Well that’s all for this month’s top release picks. Congratulations to everyone who shipped a new release, whether it was version 1.0 or version 8.0. Keep up the great work everyone! If you’ve got a new release coming, we’d love to see it. Tag us when you share your release on social media, and we’ll keep an eye out. If you missed out our last Release Radar, check out the amazing community projects from May.