The open source Git project just released Git 2.31 with features and bug fixes from 85 contributors, 23 of them new. Last time we caught up with you, Git 2.29… 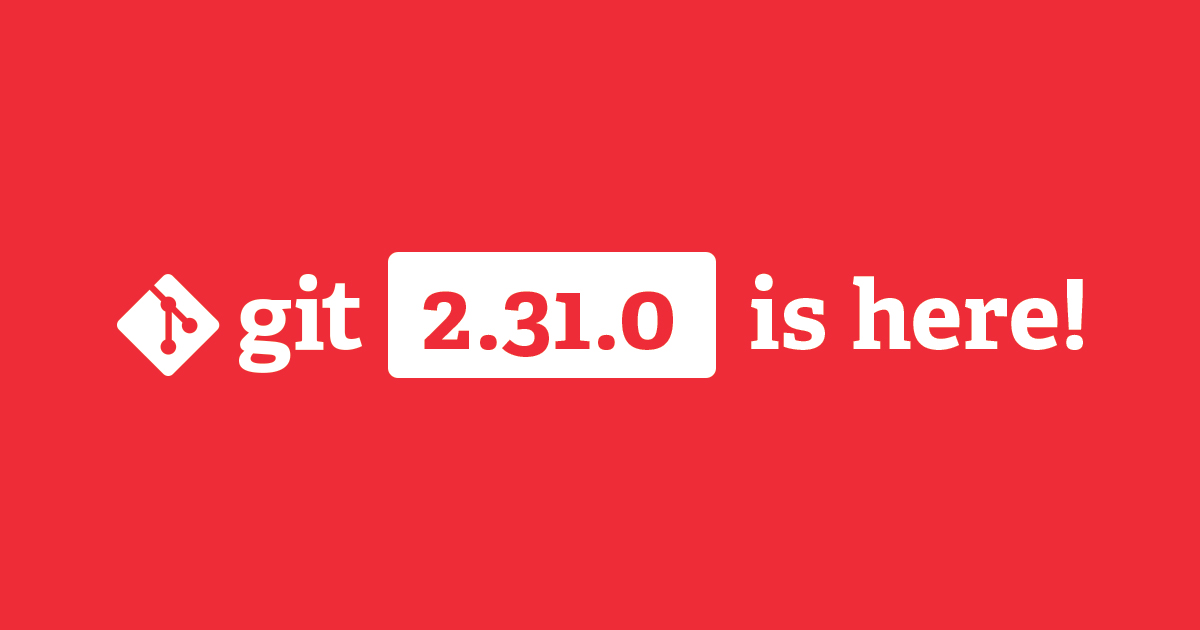 The open source Git project just released Git 2.31 with features and bug fixes from 85 contributors, 23 of them new. Last time we caught up with you, Git 2.29 had just been released. Two versions later, let’s take a look at the most interesting features and changes that have happened since.

Picture this: you’re at your terminal, writing commits, pulling from another repository, and pushing up the results when all of the sudden, you’re greeted by this unfriendly message:

…and, you’re stuck. Now you’ve got to wait for Git to finish running git gc --auto before you can get back to work.

What happened here? In the course of normal use, Git writes lots of data: objects, packfiles, references, and the like. Some of those paths are optimized for write performance. For example, it’s much quicker to write a single “loose” object, but it’s faster to read a packfile.

To keep you productive, Git makes a trade-off: in general, it optimizes for the write path while you’re working, pausing every so often to represent its internal data-structures in a way that is more efficient to read in order to keep you productive in the long-run.

Git has its own heuristics about when is a good time to perform this “pause,” but sometimes those heuristics trigger a blocking git gc at the worst possible time. You could manage these data-structures yourself, but you might not want to invest the time figuring out when and how to do that.

Starting in Git 2.31, you can get the best of both worlds with background maintenance. This cross-platform feature allows Git to keep your repository healthy while not blocking any of your interactions. In particular, this will improve your git fetch times by pre-fetching the latest objects from your remotes once an hour.

…and Git will take care of the rest. Besides pre-fetching the latest objects once an hour, Git will make sure that its own data is organized, too. It will update its commit-graph file once an hour, and pack any loose objects (as well as incrementally repack packed objects) nightly.

Read more about this feature in the git maintenance documentation and learn how to customize it with maintenance.* config options. If you have any trouble, you can check the troubleshooting documentation.

You may know that Git stores all data as “objects:” commits, trees, and blobs which store the contents of individual files. For efficiency, Git puts many objects into packfiles, which are essentially a concatenated stream of objects (this same stream is also how objects are transferred by git fetch and git push). In order to efficiently access individual objects, Git generates an index for each packfile. Each of these .idx files allows quick conversion of an object id into its byte offset within the packfile.

What happens when you want to go in the other direction? In particular, if all Git knows is what byte it’s looking at in some packfile, how does it go about figuring out which object that byte is part of?

To accomplish this, Git uses an aptly-named reverse index: an opaque mapping between locations in a packfile, and the object each location is a part of. Prior to Git 2.31, there was no on-disk format for reverse indexes (like there is for the .idx file), and so it had to generate and store the reverse index in memory each time. This roughly boils down to generating an array of object-position pairs, and then sorting that array by position (for the curious, the exact details can be found here).

But this takes time. In the case of repositories with large packfiles, this can take a lot of time. To better understand the scale, consider an experiment which compares the time it takes to print the size of an object, versus the time it a takes to print that object’s contents. To simply print an object’s contents, Git uses the forward index to locate the desired object in a pack, and then it reassembles and prints out its contents. But to print an object’s size in a packfile, Git needs to locate not just the object we want to measure, but the object immediately following it, and then subtract the two to find out how much space it’s using. To find the position of the first byte in the adjacent object, Git needs to use the reverse index.

Comparing the two, it is more than 62 times slower to print the size of an object than it is to print that entire object’s contents. You can try this at home with hyperfine by running:

In 2.31, Git gained the ability to serialize the reverse index into a new, on-disk format with the .rev extension. After generating an on-disk reverse index and repeating the above experiment, our results now show that it takes roughly the same amount of time to print an object’s contents as it does its size.

Observant readers may ask themselves why Git even needs to bother using a reverse index. After all, if you can print the contents of an object, then surely printing that object’s size is no more difficult than knowing how many bytes you wrote when printing the contents. But, this depends on the size of the object. If it’s enormous, then counting up all of its bytes is much more expensive than simply subtracting.

Reverse indexes can help beyond synthetic experiments like these: when sending objects for a fetch or push, the reverse index is used to send object bytes directly from disk. Having a reverse index computed ahead of time makes this process run faster.

Git doesn’t generate .rev files by default yet, but you can experiment with them yourself by running git config pack.writeReverseIndex true, and then repacking your repository (with git repack -Ad). We have been using these at GitHub for the past couple of months to enable dramatic improvements in many different Git operations.

That’s just a sample of changes from the last couple of releases. For more, check out the release notes for 2.30 and 2.31, or any previous version in the Git repository.