The open source Git project just released Git 2.29 with features and bug fixes from over 89 contributors, 24 of them new. Last time we caught up with you, Git 2.28 had just been… 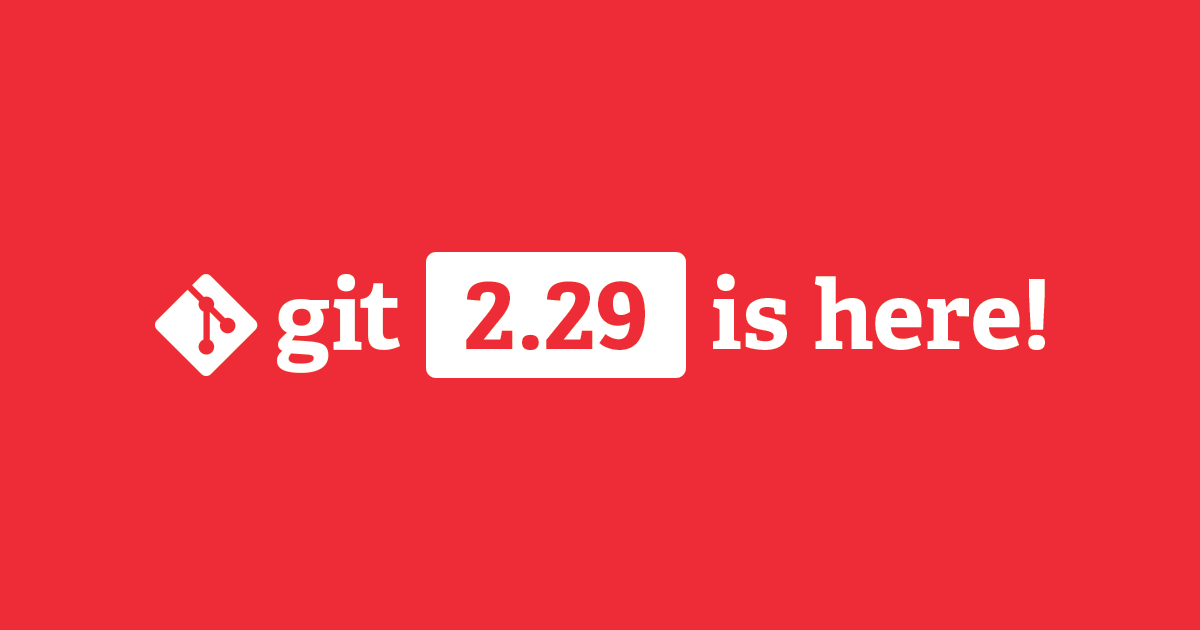 The open source Git project just released Git 2.29 with features and bug fixes from over 89 contributors, 24 of them new. Last time we caught up with you, Git 2.28 had just been released. One version later, let’s take a look at the most interesting features and changes that have happened since then.

Git 2.29 includes experimental support for writing your repository’s objects using a SHA-256 hash of their contents, instead of using SHA-1.

What does all of that mean? To explain, let’s start from the beginning.

When you add files to a repository, Git copies their contents into blob objects in its local database, and creates tree objects that refer to the blobs. Likewise, when you run git commit, this creates a commit object that refers to the tree representing the committed state. How do these objects “refer” to each other, and how can you identify them when interacting with Git? The answer is that each object is given a unique name, called its object id, based on a hash of its contents. Git uses SHA-1 as its hash algorithm of choice, and depends on the object ids of different objects to be unique.

Back in this blog post, we estimated that even if you had five million programmers writing one commit every second, you would only have a 50% chance of accidentally generating a collision before the Sun engulfs the Earth. Some published attacks exist which use tricks that exploit weaknesses in SHA-1 that can reduce the effort required to generate a collision, but these attacks still cost tens of thousands of dollars to execute, and no known examples have been published which target Git.

Like we stated back in that earlier blog post, Git (and providers that use it, like GitHub) checks each object it hashes to see if there is evidence that that object is part of a colliding pair. This prevents GitHub from accepting both the benign and malicious halves of the pair, since the mathematical tricks required to generate a collision in any reasonable amount of time can be detected and rejected by Git.

Even so, any weaknesses in a cryptographic hash are a bad sign. Even though Git has implemented detections that prevent the known attacks from being carried out, there’s no guarantee that new attacks won’t be found and used in the future. So the Git project has been preparing a transition plan to begin using a new object format with no known attacks: SHA-256.

As of version 2.29, Git can operate in either a full SHA-1 or full SHA-256 mode. It is currently not possible for repositories using different object formats to interoperate with one another, but eventual support is planned. It is also important to note that there are no major providers (including GitHub) which support hosting SHA-256-enabled repositories at the time of writing.

In future releases, Git will support interoperating between repositories with different object formats by computing both a SHA-1 and SHA-256 hash of each object it writes, and storing a translation table between them. This will eventually allow repositories that store their objects using SHA-256 to interact with (sufficiently up-to-date) SHA-1 clients, and vice-versa. It will also allow converted SHA-256 repositories to have their references to older SHA-1 commits still function as normal (e.g., if I write a commit whose message references an earlier commit by its SHA-1 name, then Git will still be able to follow that reference even after the repository is converted to use SHA-256 by consulting the translation table).

For more about SHA-256 in Git, and what some of the future releases might look like, you can read Git’s transition plan.

When you run git fetch origin, all of the branches from the remote origin repository are fetched into your local refs/remotes/origin/ hierarchy. How does Git know which branches to fetch, and where to put them?

The answer is that your configuration file contains one or more “refspecs” for each remote (remember that a “ref” is Git’s word for any named point in history: branches, tags, etc). When you run git clone, it sets up a default refspec to be used when you fetch from your origin repository:

You can have multiple refspecs, and they can refer to individual refs. For example, this command instructs Git to additionally fetch any git notes from the remote (the --add is important so that we don’t overwrite the default refspec that fetches branches):

Refspecs are used by git push, as well. Even if you type only git push origin mybranch, that last mybranch is really a shorthand for refs/heads/mybranch:refs/heads/mybranch. This allows you to express more complicated scenarios. Say you’re tagging and want to push all of the tags you have, but you’re not quite ready to share the tips of all of your branches. Here, you could write something like:

Prior to Git 2.29, refspecs could only be used to say which selection of reference(s) you want. So, if you wanted to fetch all branches except one, you’d have to list them out as arguments one by one. Of course, that assumes that you know the names of all the other references beforehand, so in practice this would look something like:

to get all refs in refs/heads/* except for refs/heads/ref-to-exclude. Yeesh; there must be a better way.

In Git 2.29, there is: negative refspecs. Now, if a refspec begins with ^ it indicates which references are to be excluded. So, instead of the above, you could write instead something like:

And of course those negative refspecs work equally well in configuration values. If you always want to fetch every branch except foo, you can just add it to your config:

While you have almost certainly used (or heard of) git log, the same might not be necessarily true of git shortlog. For those who haven’t, git shortlog acts a lot like git log, except instead of displaying commits in a sequence, it groups them by the author.

In fact, the Git release notes end with a shortlog of all of the patches in the release, broken out by their author, generated by git shortlog [source]. At the time of writing, they look something like this:

In older versions of Git, git shortlog could only group by commit author (the default behavior), and optionally by the committer identity (with git shortlog -c). This restricts who gets the credit for a commit by who that commit’s author/committer is. So, if your project uses the ‘Co-authored-by’ trailer (like this commit in git/git does), then your co-authors are out of luck: there is no way to tell git shortlog to group commits by co-authors.

…That is, until Git 2.29! In this release, git shortlog learned a new --group argument, to specify how commits are grouped and assigned credit. It takes --group=author (the default behavior from before) and --group=committer (equivalent to git shortlog -c), but it also accepts a --group=trailer:<field> argument.

Passing the latter allows us to group commits by their co-authors, and it also allows for more creative uses. If your project is using the Reviewed-by trailer, you can use git shortlog to see who is reviewing the most patches:

git shortlog also allows multiple --group=<type> arguments, in which case commits are counted once per each grouping. So, if you want to see who is contributing the most whether that individual is the primary author, or is listed as a co-author, then you can write:

…putting authors and co-authors on equal footing. Instead of counting, you can also use the --format option to find other fun ways to show the data. For example:

git for-each-ref learned a few new tricks in Git 2.29. Since there are a good handful of them, let’s start there:

Now with all of the git for-each-ref updates out of the way, let’s move on to all of the rest of the tidbits:

That’s just a sample of changes from the latest release. For more, check out the release notes for 2.29, or any previous version in the Git repository.