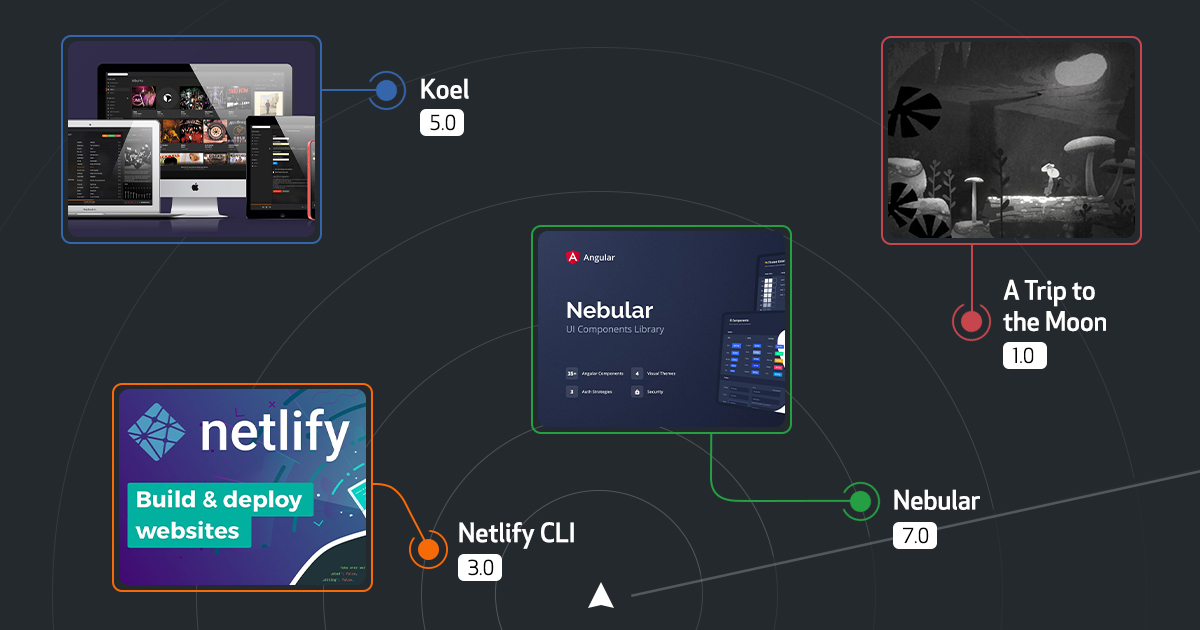 Not everyone takes a break over the festive season. Some people in the community have been busy shipping releases. So we’re here to bring you the latest and greatest releases for January 2021. These are exciting new releases from some of the coolest projects around. There’s everything from world-changing tech to weekend hobbies. The best part about these releases is that they’re all you. These are projects shipped by amazing developers from the open source community. Although there are many projects released every month, we don’t have enough blog space to capture everything, so we selected a handful of awesome examples. Pull up a chair for some end of the week reading, and stay up-to-date on these amazing projects.

Have you ever wanted to execute JavaScript code in multiple real browsers? Karma is just the tool for doing that. Test your code in various browsers, on a continuous integration server, on every save, and do it all without fuss. Karma version 6.0 comes with some new features for the CLI, client, and server. Plus there’s the usual bug fixes too. Check out Karma’s release notes for all the juicy details. Also, did we mention the Karma website runs on GitHub Pages? If you’re looking for an easy way to host your website directly from your repo, you can’t go past GitHub Pages.

ECharts-GL is an extension pack for Apache ECharts. ECharts-GL provides 3D plots, globe visualisations, and WebGL acceleration. If you didn’t know what WebGL is, it’s a JavaScript API for rendering interactive graphics for both 2D and 3D. It works with any compatible browser without needing plugins. ECharts-GL provides some of these amazing interactive graphics and visualisations. And now it’s even better. Version 2.0 is compatible with Apache ECharts 5.0! So what are you waiting for? Jump in and start using ECharts-GL today.

If you want a fast, low-cost web framework for Node.js, Fastify has you covered. Fastify promises to provide the “best developer experience” with minimal overheads and without relying on powerful plugin architecture. Just make sure you have Node.js v10 or later. Release 3.0 has a tonne of updates including additions to the docs, bug fixes, support for running preSerialization hooks, and more. Check out Fastify today if you’re in the Node.js ecosystem.

Are you one of those people who have kept libraries of music only to run out of storage space? Be it on your laptop, phone, or external HD, many of us have experienced a full drive of music. Koel is a personal music streaming server written in Vue and Laravel. It’s a beautiful, modern, interface that works with most browsers. The latest release (code name Alexi), has lots of improvements, fixes, and major changes. The biggest breaking change is their API, which now follows OpenAPI specs. Koel is now powered on Laravel 8.0 and the interface looks a touch cleaner. Read the release notes for step-by-step instructions on upgrading to the latest version.

OmniAuth is a library that standardizes multi-provider authentication for web applications. It’s low touch and designed as an authentication system in a black box. The newest release has OmniAuth defaulting to only POST as the allowed request_phase method. Plus there’s some other nice updates that help failure routes and safety. As you all know, security is really important on the web, and it’s great to see projects like OmniAuth receive lots of great updates.

Another one for security is Nebular. This is a customisable UI kit for authorisation and security. It uses the Angular 10 UI Library and the software itself is beautiful and slimline. It’s powerful and supports custom CSS properties. Release 7.0 includes a bunch of bug fixes, some code refactoring, update to Angular 11, and some UI changes. If you’re interested in comparing and visualising these updates, check out the changes made to Nebular between version 6.2.2 and 7.0. 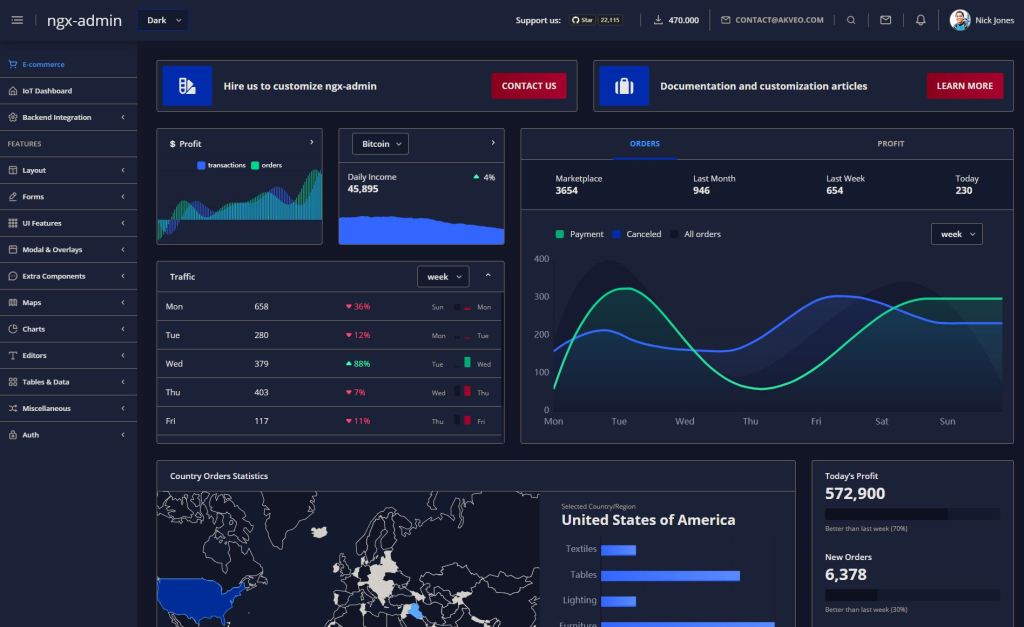 Congrats to NovelWriter for shipping their first release. It’s a markdown-like text editor for writing novels and larger projects when you have lots of small plain text docs. It’s designed to be simple, easy to collaborate with, and comes with features like metadata syntax, synopsis, and cross-referencing between files. The whole thing is built on plain text files for robustness. NovelWriter runs on Windows, Linux, and macOS so there’s no excuses not to write it out. See, we did: 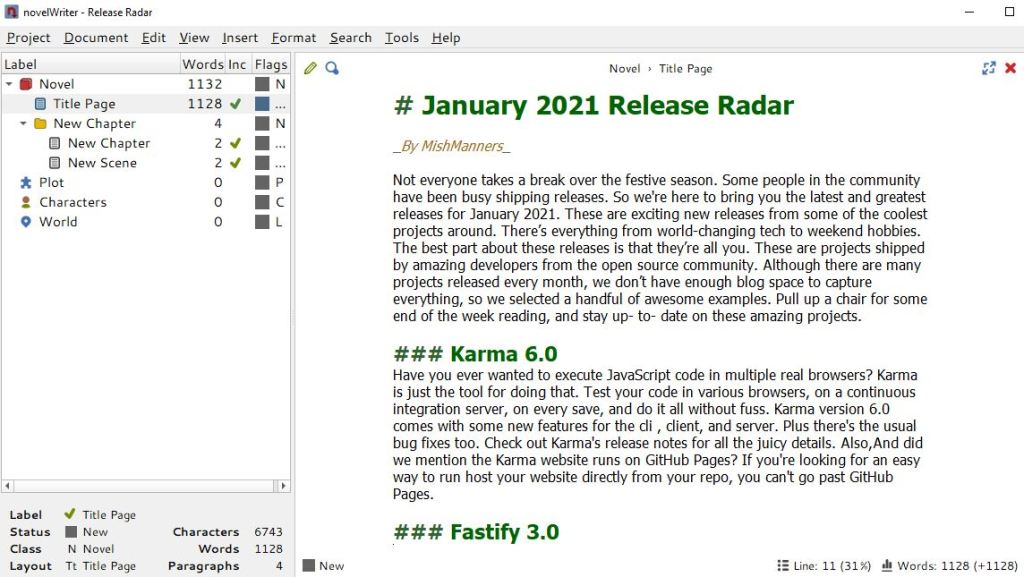 Many of our readers use WordPress to power their blog sites. Even we do! Redirection is a WordPress plugin to help manage 301 redirects. But it doesn’t just do that. It also keeps track of your 404 errors, and gives you a heads up if you have any broken links. Release 5.0 brings with it caching support, dynamic URL variables, fully automatic database option, support for migrated permalink structures, and more. Don’t miss any of the details by checking out their release notes.

You want to bring Netlify to your terminal, right? Well the Netlify CLI is here for you. Version 3.0 comes with some fixes and updated dependencies. There’s plenty of great commands to use, and you’ll never have to leave your terminal. Speaking of never leaving the terminal, have you checked out the GitHub CLI yet? If you haven’t had a chance, now is the perfect opportunity to try out both Netlify and GitHub from your terminal.

We thought we’d include something really fun for this release. While everyone was playing games over the holiday break, some people were making them. A Trip to the Moon is a new game created for the GitHub Game Off challenge. Inspired by Georges Méliès’ silent film from 1902, this game takes you on a journey to the moon to defeat the bad guys, just the same as in the movie. The game has support for keyboard and controller, and can be played through in a short sitting. If you’re looking for something fun to dig into this weekend give A Trip to the Moon a shot. It took overall first place in the Game Off as well as first place in the Graphics category.

Well that’s all for this month’s top release picks. Congratulations to everyone who shipped a new release, whether it was version 1.0 or version 7.0. Keep them coming people. Remember to check out the awesome project releases from our December Release Radar. If you’ve got a new release coming, we’d love to see. Use #GHReleaseRadar the next time you share your release on socials. We’ll be sure to keep an eye out. Happy coding.