In the month of February, we’re featuring Black maintainers that push open source software forward. Read on to find out about Courtney Wilburn, the maintainer of three open source projects: the Green Book App, Dank Memes, and EvictionAnd. 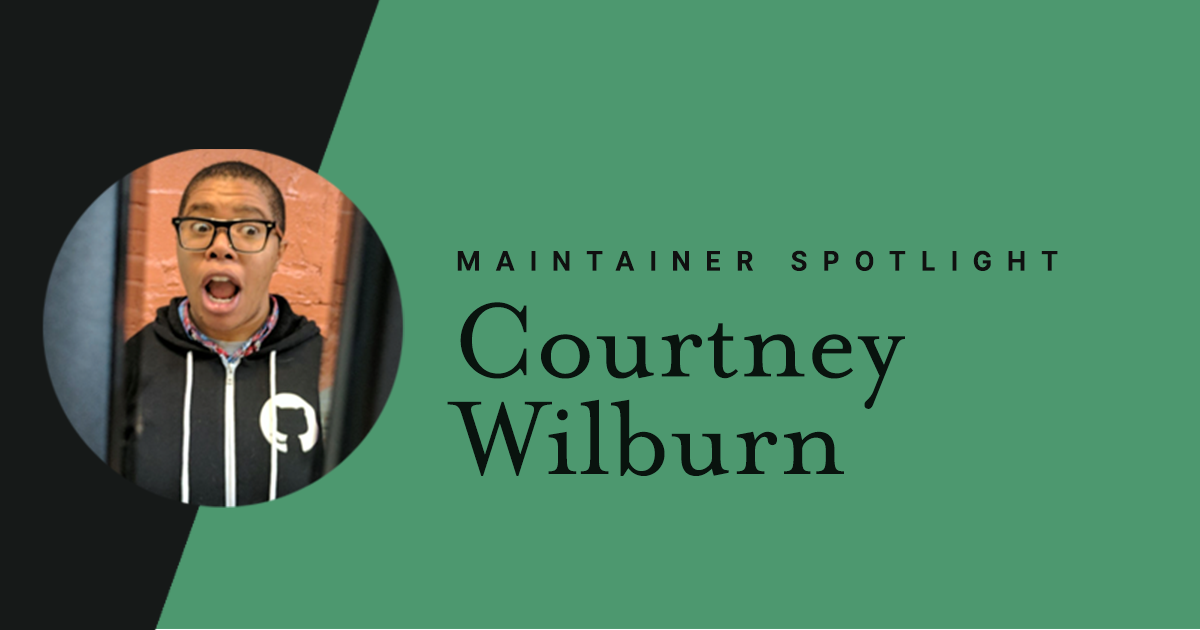 In the month of February, we’re featuring Black maintainers that push open source software forward. Courtney‘s journey began in her hometown of Memphis, Tennessee, by hacking on personal computers and lurking on Prince message boards. She loves finding unusual and efficient ways to solve problems, building tools, developing workflows, and building infrastructure almost as much as she enjoys finding ways to keep activists safe organizing online. When she’s not diving deep into web architecture, she can be found in Philadelphia running, hiking, biking, cooking, brewing beer, knitting, or singing karaoke duets with her wife. Aside from being a Lead DevOps Engineer for Wirecutter, Courtney is the maintainer of three open source projects: the Green Book App, Dank Memes, and EvictionAnd.

Tell us about the project you maintain.

I maintain three open source projects, one is called the Green Book app, which envisions information sharing among those most vulnerable to law enforcement violence (including, but not limited to: people in the LGBTQ communities, people of color, citizens returned from incarceration, currently unhoused). Another project is Dank Memes, a meme generator, written in node. The final one is EvictionAnd, which aims to heat map eviction data alongside data from other risk factors to help housing activists and outreach folks find vulnerable populations.

Why did you start this project?

Two of the projects were related to the White House LGBTQ Tech and Innovation Fellowship during the Obama administration. The other was a fun thing I decided to do.

How did you first spread the word about your project?

Most folks still don’t know much about the two civic tech projects, but Hacktoberfest really helped spread the word. Each year, I do my best to tag issues by difficulty, and people have really had fun contributing by doing something that may seem kind of small, but sincerely helps me a great deal.

I feel like I’ve learned a lot about human nature. Energy and enthusiasm about projects ebb and flow as time goes on, and sometimes people make time commitments that they don’t intend to keep, which can be disheartening. However, co-workers from past and present have contributed to my projects, which has helped us get to know each other better.

What’s one of your favorite moments as a maintainer of this project?

When I think about the level of joy it brings a beginner when they do something that works well, it’s always a treat.

Keeping up your level of enthusiasm can be a challenge. Having enough time to work on some of the outstanding issues while having a quasi-normal life outside of the project and work can be difficult to maintain.

What do you see as the greatest contribution need for your project now or in the future?

More than 24 hours in a day (kidding!). But seriously, lots of things. My primary desire would be to have a very large dedicated group of people who want to help out. Eventually, I’d love to compensate contributors on some level, but I cannot at the moment. I’d also want to keep it free of the level of influence that large-scale, outside funding would possibly introduce, so I’d really love to hear from other maintainers about how they balance this.

Are you looking for contributors? What types of contributions does your project welcome?

We welcome people from all walks of life, so long as they agree to abide by the Codes of Conduct in each project’s repository. Writing tests and documentation is a great task for anyone new to a project or new to coding, in general. Additionally, if anyone is from a group that is underrepresented in tech or STEM, I’d be happy to have them help.

What advice would you give someone who wants to run an open source project?

Be patient. Know your limits, and don’t be afraid to ask for help when you need it. Take breaks from the project if you need to.

Want to learn more about featured maintainers for Black History Month? Read about: