Mark and Rachel are both maintainers on the End Bias Wiki (EBWiki) project. Read more about their mission to tell the stories of people of color who have died as a result of police action. 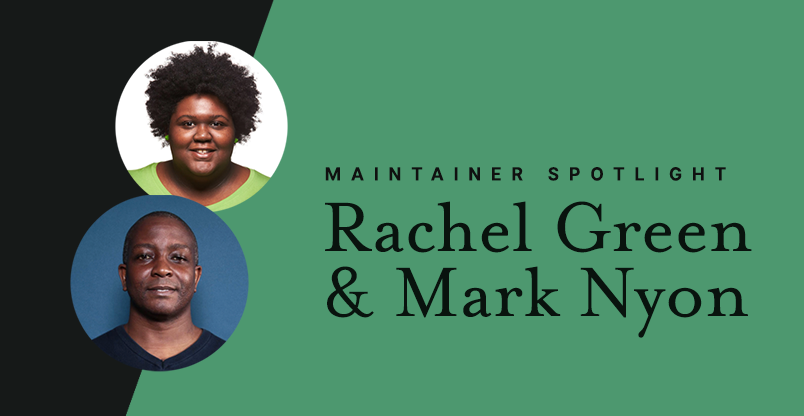 In the spirit of Black History Month, throughout February we’re featuring Black maintainers who are making impactful contributions to the world through open source. Mark is a senior software engineer at 2U, Inc., a global leader in education technology that partners with universities to build, deliver, and support online graduate programs and certificates at scale. Over the course of his career, Mark has architected websites and improved software development processes for small web incubators to large enterprise companies. His experience spans across industries such as education, fashion, financial services, healthcare, and media, including a five-year stint at MTV Networks. Mark is a member of the New York chapter of the /dev/color program as well as a web development instructor and Advisory Board for the Disrupt Harlem Code Squad where he has helped students build a portfolio of projects on GitHub.

Rachel is a web developer based in Houston, Texas, with experience in building B2B, e-commerce, and enterprise applications. Her skill set includes experience with programming languages, systems, and tooling such as Ruby, Erlang, and AWS. She is also a regular contributor to open source projects and co-organizer for tech related meet-ups. Outside of tech, Rachel is also involved with civic engagement and advocacy efforts and is passionate about the potential for tech to do good for others. When it’s time to relax, Rachel can be found curled up with a good book while baking bread.

Mark and Rachel are both maintainers on the End Bias Wiki (EBWiki) project, a crowd-sourced platform for tracking cases of police violence against people of color.

Tell us about the project you maintain.

Rachel: End Bias Wiki (or EBWiki) is a crowd-sourced wiki containing information about people of color that die as a result of police action. Our goal is to provide a space where users can learn more not just about the initial incident that led to the victim’s death, but also any later activity such as legal action or a department policy change. Our hope is that by shining a light on these cases we can spark needed conversations about public safety, criminal justice, and institutional racism.

Why did you start this project?

Mark: I started this project with Darius Goore in April 2016, right after the Walter Scott case. Some people in an online community of Black technologists were upset, and we thought, “We keep hearing these false narratives about how often this happens. We should start keeping track.”

Rachel: I actually got involved with this project when Mark reached out to me in a Slack group. We had already talked a bit about doing work in Ruby on Rails (our tech stack for EBWiki), and he asked me if I was interested in contributing. Looking at the project at the time though, it wasn’t quite clear what the most pressing need was so I pivoted towards creating a roadmap, and the rest is history.

How did you first spread the word about your project?

Mark: On a personal level, it helped give me a purpose right after my mother had passed away and I felt that I didn’t have much of a direction. Professionally, it’s helped hone my open source software development skills, been a catalyst for helping me level up on a variety of technologies, and has also helped me work with other people and find new opportunities.

Rachel: Well, I’m definitely more accustomed to jumping into an established project and quickly getting up to speed. It’s also given me more perspective on how to mentor and work with those who are newer to open source work, Ruby on Rails, and programming in general. The project has also given me the opportunity to work with new people and use a variety of technologies.

What’s one of your favorite moments as a maintainer of this project?

Mark: One of my favorite moments happens when we get emails from the family members of one of the victims in the cases on EBWiki. Having a place where the story around the case is remembered once the case has fallen out of the public eye has turned out to be helpful.

Rachel: Definitely getting emails from family members—that always touches my heart. It’s also gratifying to hear from others in the community, especially advocates, that appreciate how important data is to fighting injustice.

What’s something challenging about maintaining a project that people don’t necessarily realize?

Mark: I think it can be difficult to realize how much work and time it takes to put something together and keep it going. Doing this around a full-time job can affect bandwidth.

Rachel: It can be hard to get people moving in one direction. With a job, you usually have a single direction people are going in and the same people are consistently working on the project. But with open source, you usually have a lot of people at varying skill levels coming and going. It can make it harder to get some of the larger complex work done because you need one person to handle it over time.

What do you see as the greatest contribution need for your project now or in the future?

Mark: It would be great to have funding for EBWiki if only to offset the server costs. Failing that, additional coders to work on features and writers (both for wiki articles and documentation). Also, if social media is in your wheelhouse, definitely get in touch.

All in all, if you feel that there’s something you can give to the project, we’re all ears.

Rachel: Funding would be great to offset operating costs such as hosting, analytics, etc. In terms of developers, it would be great if we could have a couple of dedicated front-end volunteers, but we’re happy to have anyone that wants to contribute. And even if you aren’t familiar with our stack or coding in general, there’s always a need for people to add more cases to the site.

Are you looking for contributors? What types of contributions does your project welcome?

Rachel: Most definitely. Any type of contribution would be welcome from additional coders, graphic designers, and UI/UX people. If you feel that you could contribute in some way to the site, let us know.

What advice would you give someone who wants to run an open source project?

Mark: Don’t be afraid to put something out there regardless of your skill level. It’s a great way to learn new technology as well as how to work with other people to learn how to make something.

Rachel: You won’t ever “end” your project in the sense that you finish developing—even when you stick to doing one thing, you’ll always find something that you can do to enhance your project. But at the same time, it’s okay to take a step back or even hand it off to someone else if you need to.

Want to learn more about featured maintainers for Black History Month? Read about:

Stay tuned, we’ll be posting this series every Friday throughout February.