Olivia Ross is a high school sophomore at Phillips Exeter Academy. After teaching herself to code in junior high, she found herself addicted to this new medium for her creativity.… 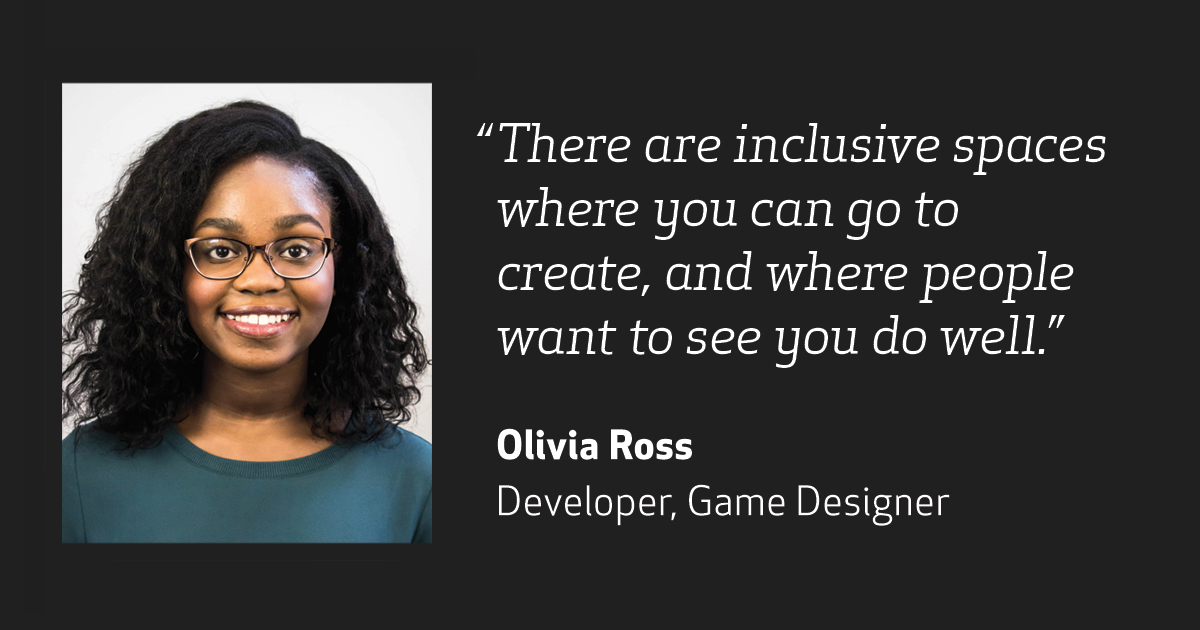 Olivia Ross is a high school sophomore at Phillips Exeter Academy. After teaching herself to code in junior high, she found herself addicted to this new medium for her creativity. Now a game designer, she’s taken her coding skills and blended them with the humanities. As she explores the rapidly emerging field of interactive media arts, she volunteers as a technical instructor at Black Girls CODE events in NYC to help girls of color find that same creative energy within themselves and become the leaders of tomorrow.

She shared her thoughts with us on the mission of Black Girls CODE, the future of game design, and some advice for young women trying to break into tech.

How did you first discover you were interested in technology?

I was first interested in tech during spring break in sixth grade. My brother was in college, and he came home with a book about HTML and CSS. He was not particularly interested in it, and he tossed it aside somewhere. I found it and I was kind of fascinated by it.

After he took the book back to school, I tried to do some research online about web development and accidentally clicked “View Source.” I honestly thought I’d broken the browser. However, after googling the first line of the source code which happened to just be < header > tags, I realized that was what HTML looked like. I realized I never wanted to be confused about technology again. I wanted to understand everything about how it worked. Needless to say, I became a very proficient “Googler.”

How did you become involved with Black Girls Code and what was the experience like?

The summer before sixth grade, I went to an environmental science camp. It was interesting and fun but after I discovered computing, I knew I’d rather spend the summer learning more about code indoors rather than swatting mosquitoes outdoors. I thought I’d continue to read all that I could find but my sister who lives in the Bay Area where Black Girls CODE originally started, told my mom about BGC New York chapter’s hackathon and signed me up.

It was a two-day hackathon where we built apps to combat domestic violence. My team won, and so we went to another hackathon at the Essence Festival in New Orleans, and I got to mentor another group, who won second prize.

I feel that if I hadn’t participated in BGC, I wouldn’t have discovered the greater possibilities around computer science—the fun parts. There were no CS programs at my school, so I was kind of on my own. It’s funny, but I really relate to the “brogrammer” stereotype, studying alone in my bedroom, huddled over my computer in the dark. What I discovered through BGC is that I enjoy coding in a group so much more than by myself. Through BGC, I also realized I didn’t have to divide myself between art and computer science—I can do both! 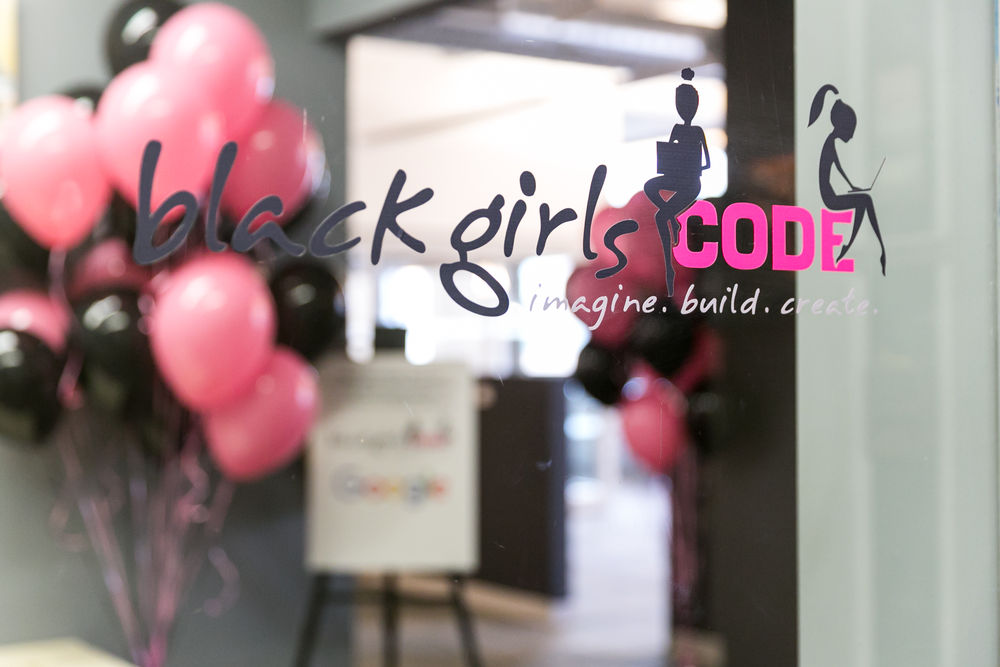 Do you have any role models who have helped you along the way? Do you plan to mentor other young women in the future?

I did not have a role model in the literal sense. In the beginning, I was really only trying to see what I could learn on my own through online tutorials and group forums. After I went to a couple BGC meetups, I met a college student named Brianna Fugate. I aspired to be like her because not only was she so knowledgeable, she actively reached out to her community and mentored younger girls. I respect and prioritize that. I also have a lot of admiration for some female game designers that I follow on Twitter.

Computer science curriculum was non-existent at my school when I was first starting out. I consider myself pretty lucky to now be attending a high school that’s well known for having a strong computer science program, as well as a very active community of students who have a real passion for it. I’m excited to see what kind of programmer and artist I’ll become over the next few years in this environment.

Professionally, I want to work in STEM education. I think it’s really meaningful and important to make technology more diverse. STEM education and art—the intersection there is really important and cool.

What are some of your favorite projects that you’ve worked on? What accomplishments are you most proud of?

I’m pretty proud of the project I’m working on now for Uncharted Play. I’ve been developing a tabletop game to cement the topics within their core curriculum and to encourage convergent and divergent thinking in children. Despite being aimed at elementary schoolers, however, adults seem to find it pretty fun!

Another project I worked on at summer camp before 8th grade was published to the App Store, which felt really good to say just now. It’s called SuperBlock. It’s an infinite runner, similar to games like Temple Run, where you play as a rectangle that’s secretly a superhero. Your superpower gives you the option of growing taller or smaller. However, when you grow bigger, you’re too heavy to jump. The obstacles coming toward you come in varying sizes. When you’re big, you can just smash through the large obstacles but you have to quickly shrink to jump over the shorter ones. The game speeds up slowly to increase the difficulty while allowing users to learn how to play.

Through Black Girls CODE, I was able to present SuperBlock in front of hundreds of people (including White House CTO, Megan Smith) at the 2016 MAKERS Conference. While there remains a graveyard of unfinished projects on my computer, I think I will always be proud of that one.

What does the future hold for you? Do you have specific ideas about what you would like to do?

I definitely want to keep making games. I’d love to make a living off of developing games independently. However, I doubt I’d be able to make the next big thing right away—those kinds of things rarely happen on accident.

A really awesome job would be working in STEM education. I currently am the co-director of this organization of high-school students that put on STEM events in New York City. We’re called The Young Hackers and we’ve been around since 2014. The thing I adore most about working here is that I get to see real impact on my community. We create inspiring and inclusive spaces where children from all backgrounds and identities can discover what CS can offer them.

I also really love teaching. I’ve been volunteering at Black Girls CODE, most recently as a Technical Instructor. A few weeks ago, I taught a class full of twenty young girls between the ages of six and nine how to build apps in MIT App Inventor. I spent a good portion of a hackathon last weekend making a tutorial on web games in Phaser for a workshop I am planning. Working at places like Khan Academy, Sesame Workshop, or even making learning games like I do for Uncharted Play would be amazing to continue to do in the future.

What advice would you give to a young black woman who is wondering about how to get into technology but is feeling discouraged or nervous?

I think that if someone wants to get into the field of technology, you should know straight away that finding people who look like you is going to be very difficult. I have yet to go to a hackathon that the Young Hackers didn’t organize where I could quickly find another black girl. Don’t have any shame in taking advantage of every single opportunity. They don’t exist to make things easier. They exist to level the playing field.

Even if you find that some places are hostile, there’s someone somewhere who wants you to work for them. It’s important to know that there are inclusive spaces if you look for them, where you can go and create, where people want to see you do well.

There are tons of ways to support Black Girls CODE and help young people get the foundation they need to do something amazing with technology. You can donate, mentor, or if you’re in the Bay Area, join us for a benefit concert featuring artist and actor Common.