We released GitHub for Mac almost exactly 5 months ago. Today we're excited to release its first big update. So, what's new? Redesigned changes The entire changes view has been…

The entire changes view has been redesigned. It’s now easier to review your changes and roughly 5 gazillion times faster.

We think commit messages are pretty important. But it’s hard to create meaningful messages if you have unrelated changes in the same file.

So we added per-line committing.

Select the lines you’d like to commit. Write an awesome commit message. Commit. 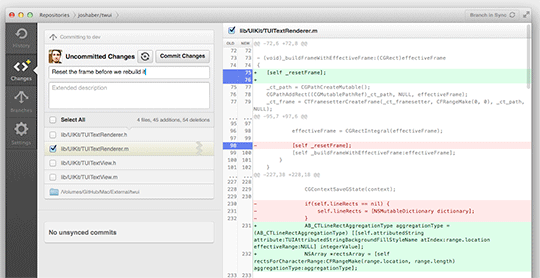 A few other noteworthy changes:

The app will automagically update itself. If you want to make sure it’s grabbing the new version, go to the GitHub => About GitHub menu.

As always, feel free to contact us if you need any help.