At GitHub, we strive to make it easier for developers to release the best version of their code to users. As a result, we've rolled out a new feature that allows you to explicitly set which release of your code is the latest.

Previously, a repository's latest release was the one created on the most recent date. In the event that multiple releases had the same date, the semantic version number broke the tie.

This new feature provides an explicit toggle to mark a release "latest" when you create it. This gives you more control over your code, and it works both in the web interface and through the API (GraphQL, REST).

Read more about releases in the GitHub documentation.

We appreciate feedback on this and other topics in the GitHub Community discussions.

When you are building out a configuration for Codespaces using a dev container, the default behavior is now to do an incremental rebuild. The existing rebuild functionality is still available and has been renamed to ‘Full rebuild’.

Incremental rebuild is much faster because it builds on top of your existing docker cache, reusing common images and layers between rebuilds. This is readily apparent when adding configurations to the default container for Codespaces which is quite large.

When using VS Code, you access these commands from the command palette.

The rebuild behavior prior to this change was full rebuild, which is slower but guarantees correctness because it removes all images from the virtual machine before re-pulling even unchanged images. You may occasionally want to do this after many iterations of rebuilding your configuration, and want to free up disk space or ensure your configuration is not dependent on layers that won’t be present during a clean creation of a codespace from the configuration.

Manage caches in your Actions workflows from Web Interface 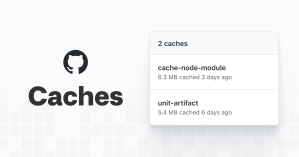 Caching dependencies and other commonly reused files enables developers to speed up their GitHub Actions workflows and make them more efficient.
We have now enabled Cache Management from the web interface to enable developers to get more transparency and control over their cache usage within their GitHub repositories.

Actions users who use actions/cache can now:

In addition to the Cache Management UX that we have now enabled, you could also use our Cache APIs or install the GitHub CLI extension for Actions cache to manage your caches from your terminal.

Learn more about dependency caching to speed up your Actions workflows.
For questions or to share your feedback, visit the GitHub Actions community.