Linux is celebrating its 30-year anniversary today, so I’m taking the opportunity to highlight 30 of my favorite free and open source Linux games, their communities, and their stories! If… 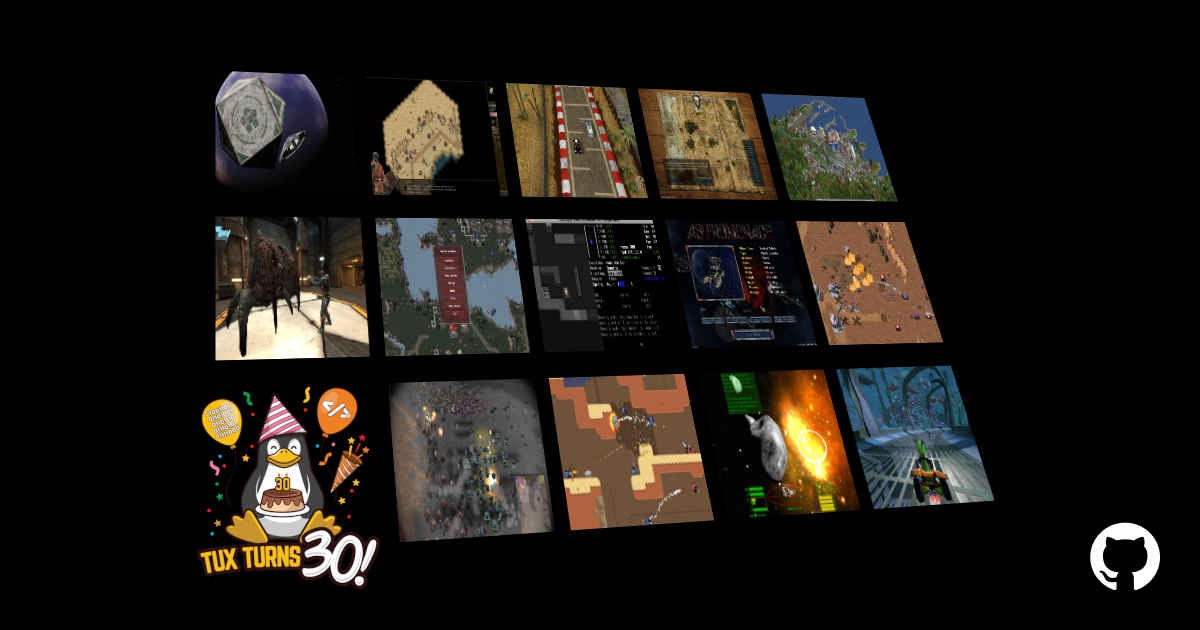 Linux is celebrating its 30-year anniversary today, so I’m taking the opportunity to highlight 30 of my favorite free and open source Linux games, their communities, and their stories!

If you like RTS, FPS, space trading, roguelike, racing, strategy, or platform games then you’re bound to find something you like below. Oh, and some of the games work on Windows and macOS too, so there should be something for (almost) everyone.

In no particular order… 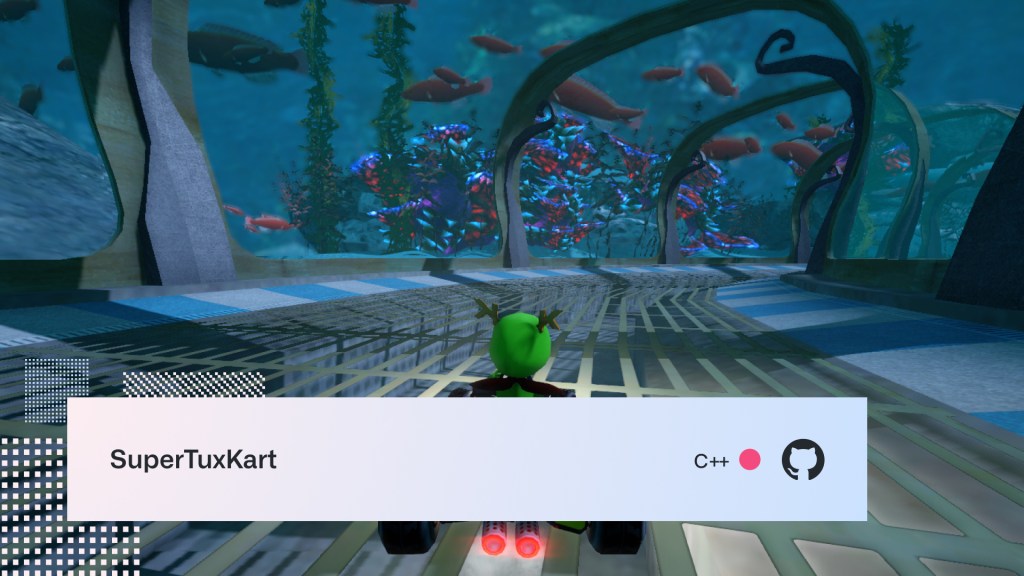 It’s impossible to start a list of Linux games without paying homage to Tux, the logo brand character for the Linux kernel.

Tux is the star of SuperTuxKart, a fun arcade racing game that includes a variety of characters, tracks, and modes. You can race against the kernel, on your LAN with friends, or with complete strangers from all over the world online. If you like Mario Kart or Sonic All Stars Racing, you’ll love this!

Fun fact: You might recognize some of the other characters in the game like Wilber, Pidgin, and Konki from the open source projects they represent. I wonder if we’ll ever see Mona? 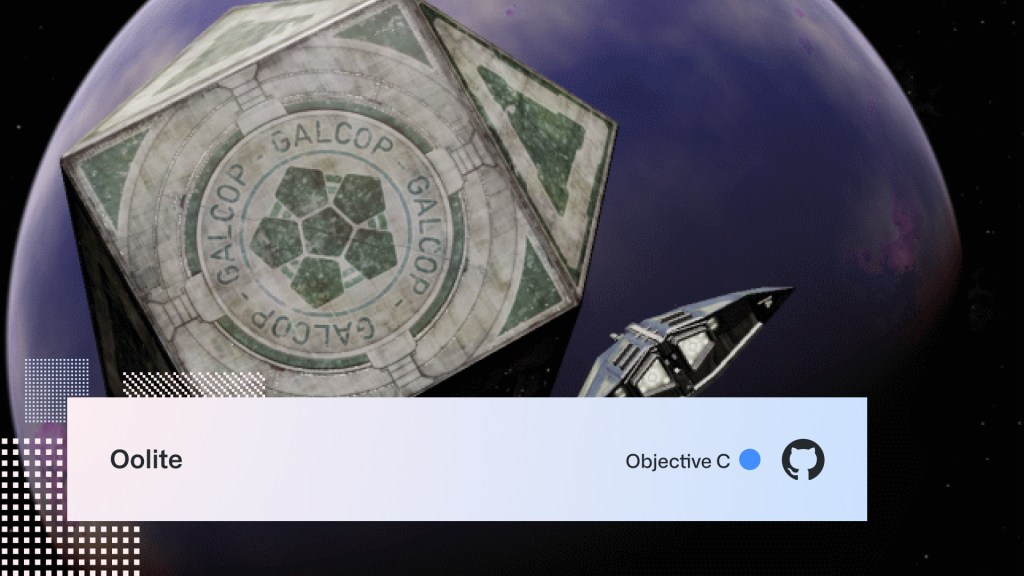 Billed as an open-word space opera, Oolite is inspired by David Braben’s classic game Elite—a game I spent many an hour playing on my school’s BBC Micro.

Forge your own path in the galaxy by becoming a feared pirate, a dodgy trader, a gun for hire, or a washed-up software engineer searching the galaxy for coin.

Did you know: There are over 500 expansion packs created by the community that introduce new ships, missions, weapons, and more. Maybe I’ll nerd-snipe myself into building some sort of GitHub Universe this weekend. 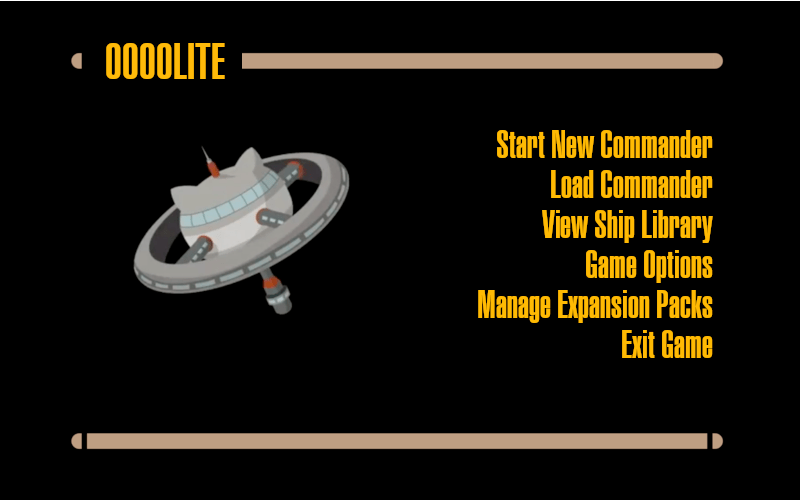 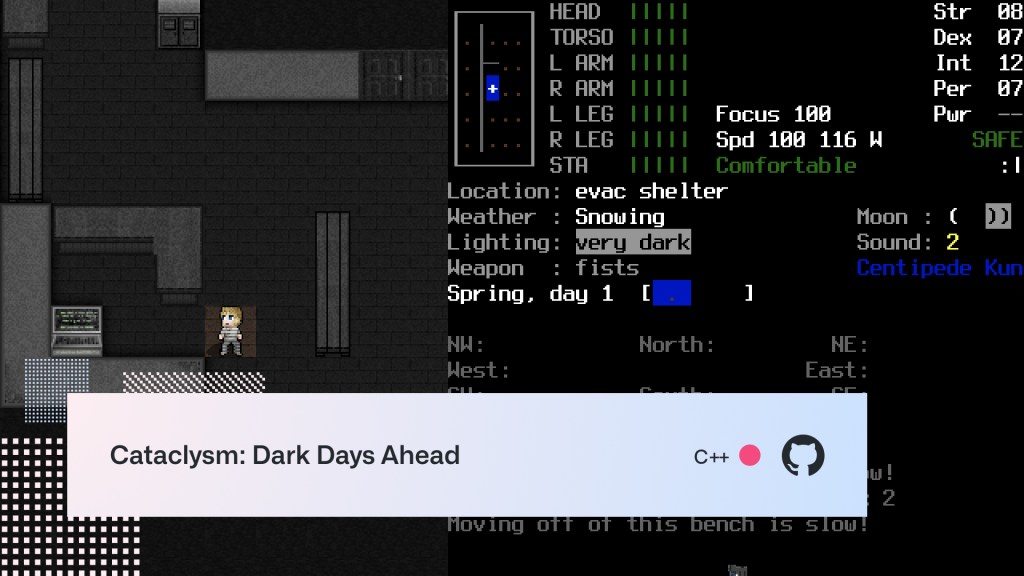 Cataclysm: DDA is a roguelike game set in a procedurally generated, post-apocalyptic world. Think zombies, nuclear waste grounds, that sorta thing. Like most roguelikes games, it’s primarily text-based, but there are tilesets available.

Did you know: The game has over 1300 contributors who are  introducing new crouching mechanics, fixing in-game computer terminals, adding lakes and flyable helicopters, and more.

If you catch the Cataclysm: DDA bug and would like to contribute, check out the Contributing Guide. You can add some documentation, translate content, or get your code on and add some new NPCs, monsters, missions and more! For the most part, that’s as simple as adding/editing some JSON.

The Battle for Wesnoth 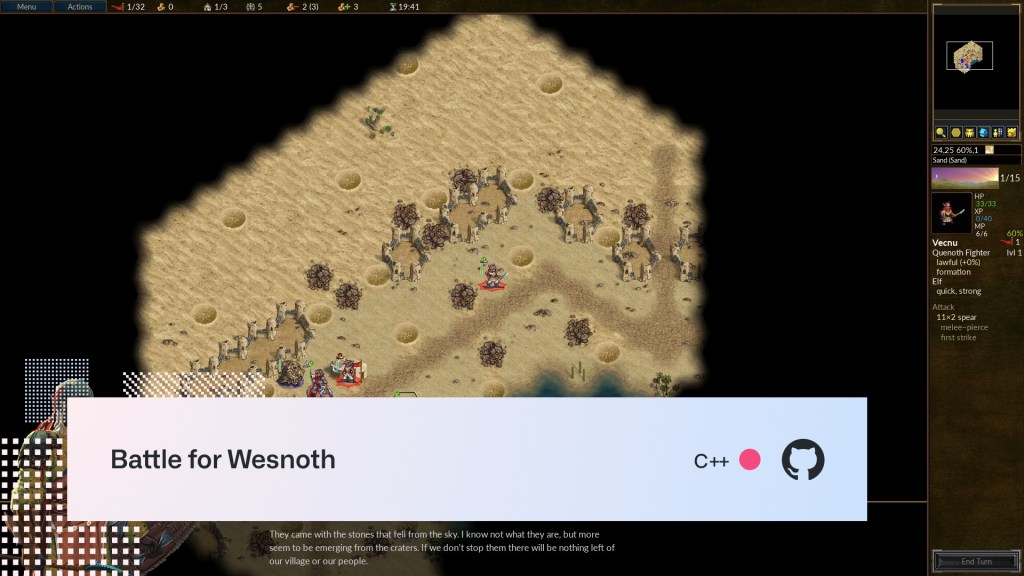 Battle for Wesnoth is a turn-based strategy game with a variety of campaigns involving elves, dwarves, orcs, trolls, humans, and more. Speaking of humans, hundreds of them have contributed maps, campaigns, features, and bug-fixes to the project.

If you’re looking for an excuse to get some extra green squares on your contribution graph, you can create new maps, campaigns, and units, introduce new art or music, help with translations, or even update the AI.  Check out this getting started guide.

Warning: As the thousands of very positive reviews on Steam might suggest, this game is addicting. So much so, if you’re on your laptop and lose track of time you might run out of battery. Thankfully, someone submitted a fix for that! 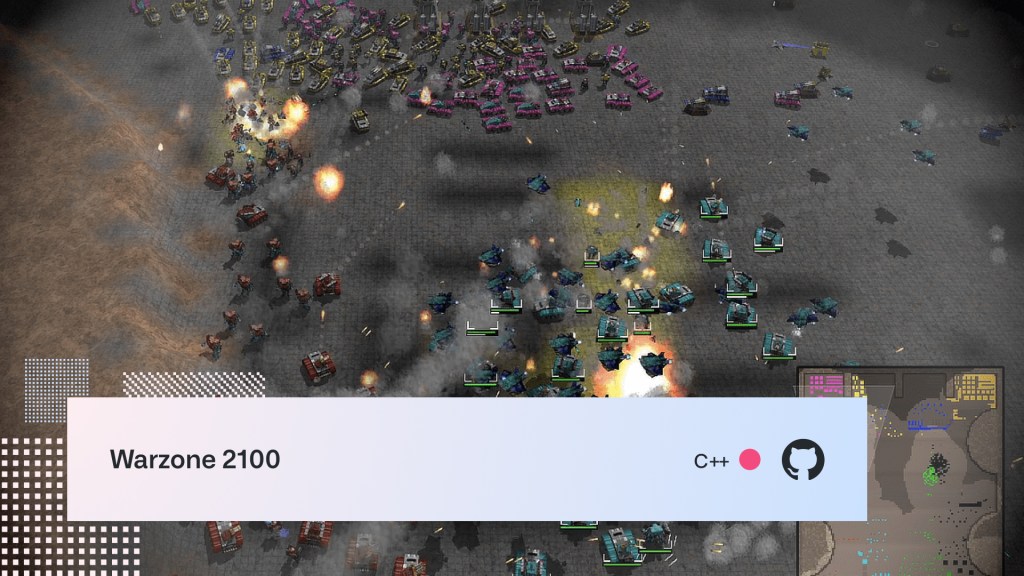 A malfunction in Earth’s new strategic defense system causes a series of nuclear strikes that take out almost every inhabitant on Earth. Your job is to help rebuild civilization, but as you can imagine, there are a few barriers to overcome first.

Originally developed by Pumpkin Studios and released in 1999, Warzone 2100 was open sourced in 2004 under a GNU GPL v2.0 or later license. Now the project is entirely community-driven and still sees plenty of updates from hundreds of contributors. If you like real time strategy games, you’ll like this. 👍🏻 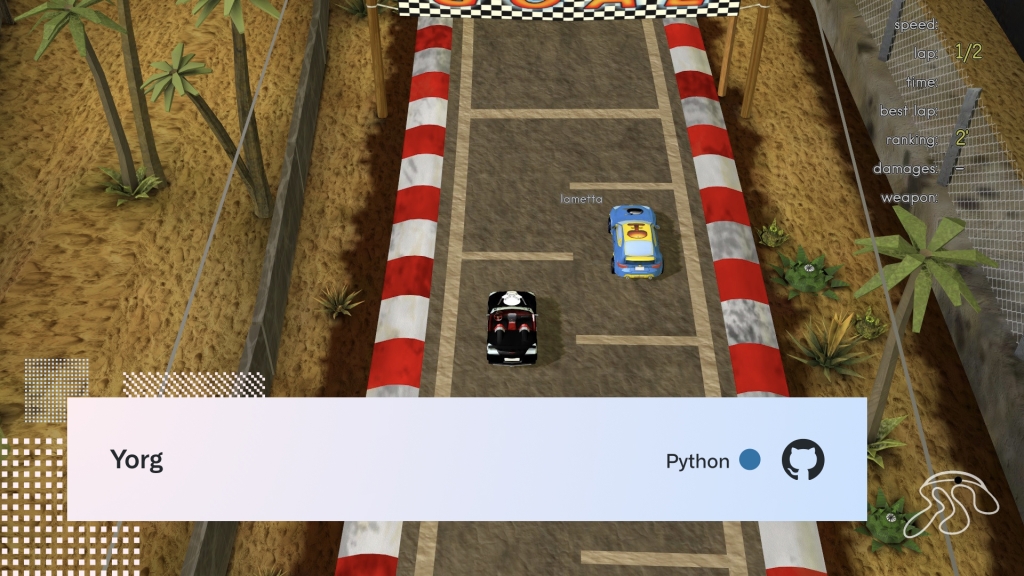 Yorg (no, not that one) is an arcade-style racing game with lots of cars, tracks, powerups, and weapons. Race against AI or take on your friends in local/online multiplayer! I’m probably a little biased as I grew up loving games like Micro Machines and Ivan “Ironman” Stewart’s Super Off Road. 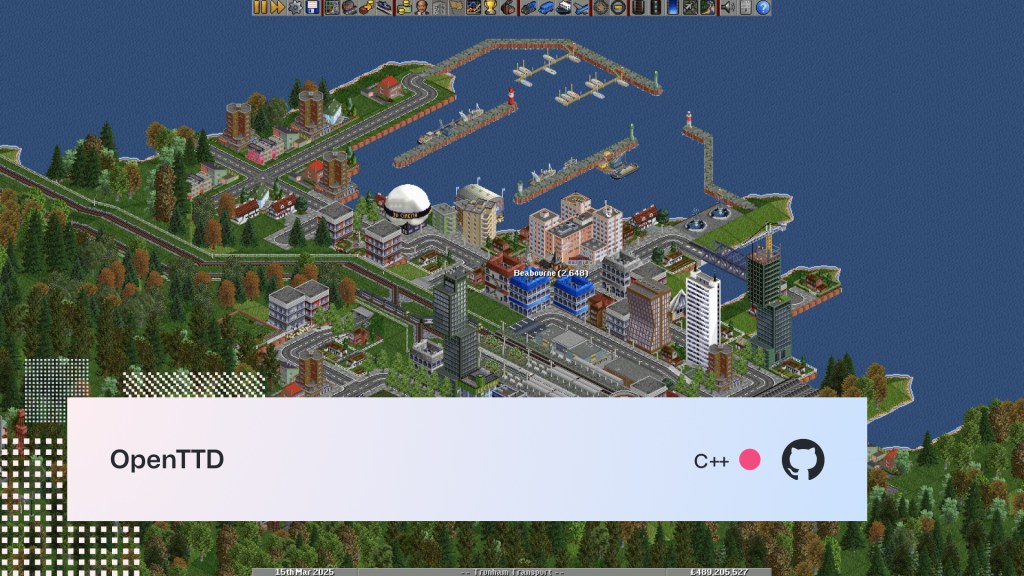 Did you ever play Transport Tycoon Deluxe back in the day? OpenTTD, as the name suggests, is an open source game based on it. In addition to mimicking the original game, it offers significant new features, like multiplayer mode for up to 255 players, waaay bigger maps, and the ability to build on slopes and coasts!

If you have a little time and are familiar with C++, consider contributing to the project. Check out the CONTRIBUTING.md for details about the goals of the project and the kinds of things you could work on. 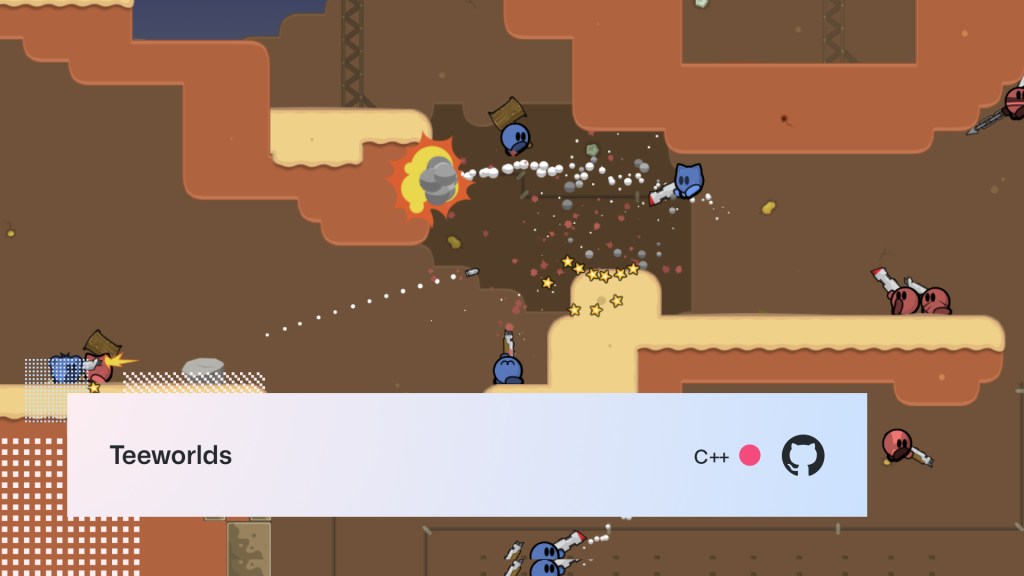 Easy to learn, but hard to master, Teeworlds is a nice little MMO that’s a mashup of retro platform and shooting games. Customize your character, battle with up to 16 players, create your own maps, or check out some of the amazing community-created maps. 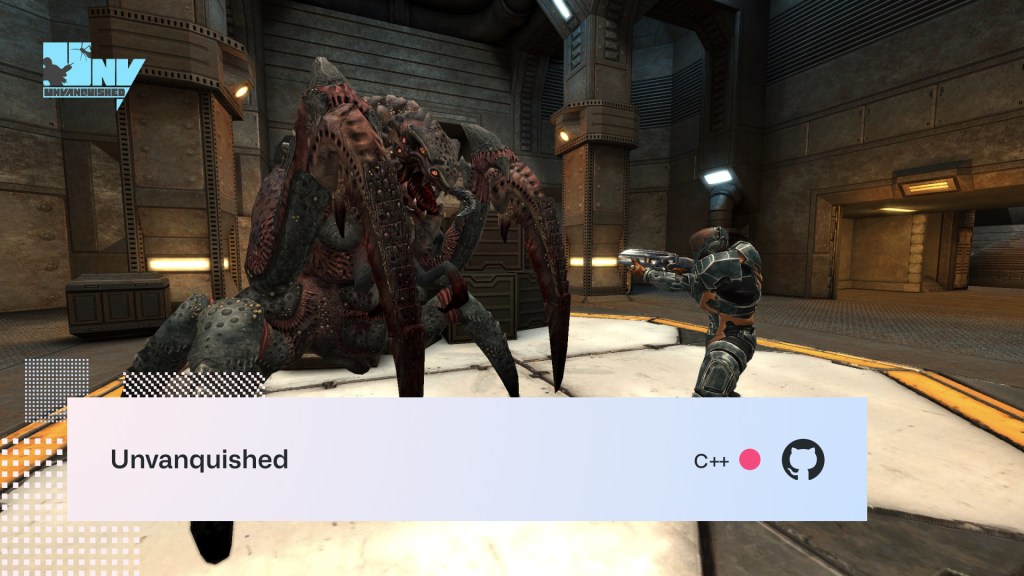 Unvanquished is an FPS strategy game pitting superhuman soldiers against devious aliens. Take shots destroying the enemy bases – either as a human with long range firepower, or as an alien in close combat who prefers stealth.

Unvanquished has been in development for 10 years, with the first release in February 2012. Since then, the game has had monthly releases – the latest being the 0.52.1 beta release – chock full of enhancements, bug fixes, and a new flatpak making it easier to install across almost every Linux distro. 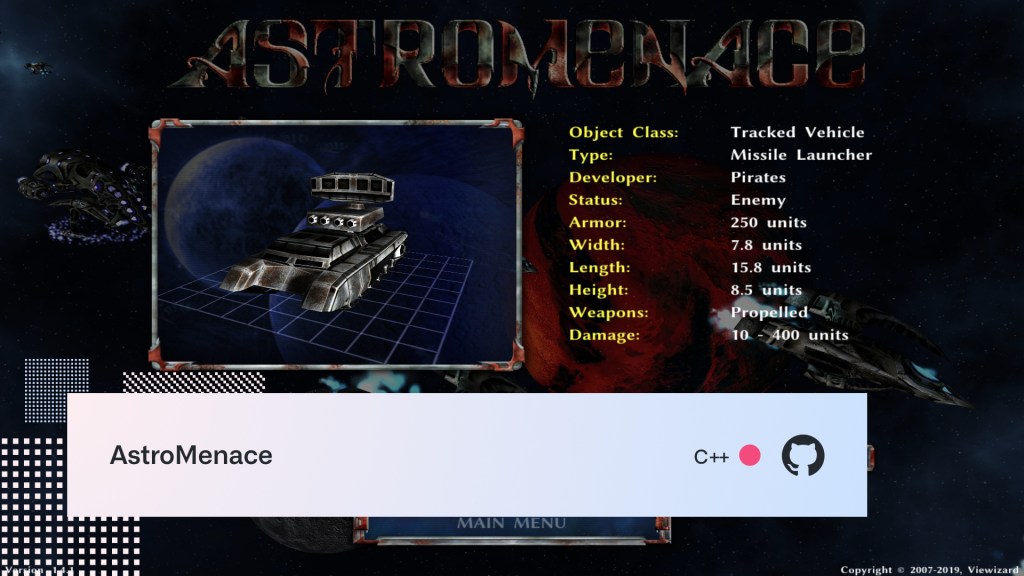 If you grew up on games like Gallaga or 1942 R-Type, or if you just like blowing stuff up in space, then this game is for you. AstroMenace is a shoot-em-up developed and published by Russian indie game developer @viewizard.

Translators wanted: If you’d like to help make the game more friendly and welcoming for everyone, they are currently looking for help translating the game to other languages. I don’t see any requests for Klingon translation. Yet. Qapla’.

Editor’s note: Not sure if Lee is only giving us the first 10 because he’s trying to master clickbait… or if he hasn’t actually written the rest of the post. Let’s find out tomorrow! 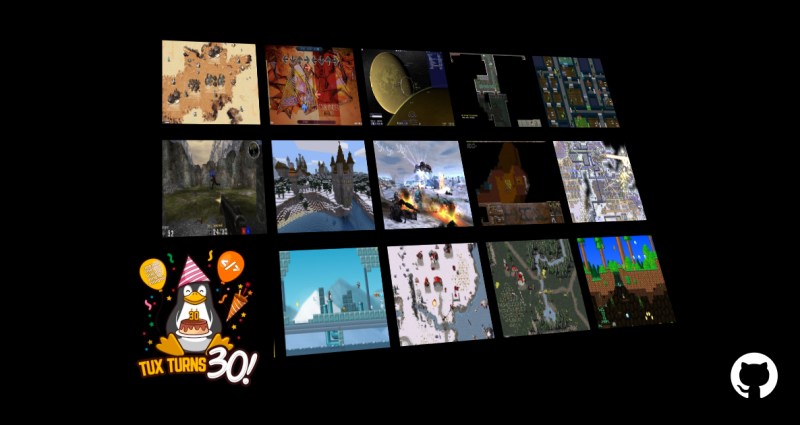 With Linux celebrating it’s 30 year anniversary, I thought I’d use that as an excuse to highlight 30 of my favorite free and open source Linux games, their communities, and…

Linux is celebrating its 30-year anniversary, so I’m taking the opportunity to highlight 30 of my favorite free and open source Linux games, their communities, and their stories.   I…