We’re sharing new and exciting releases from world-changing technologies to weekend side projects in the March 2019 edition of Release Radar. 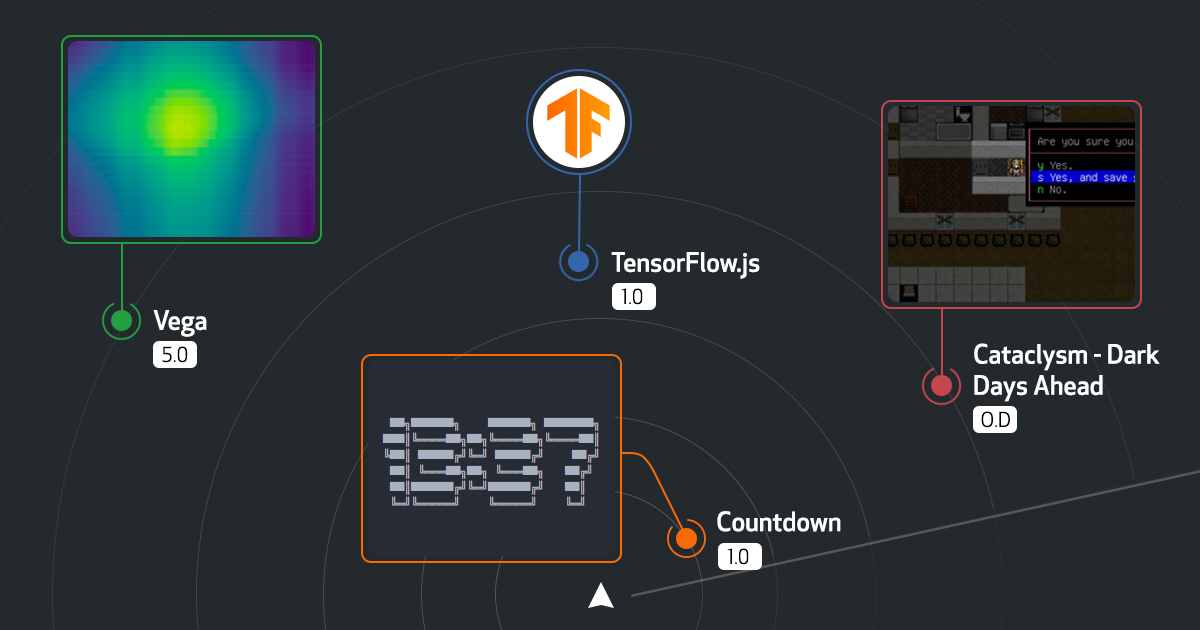 Welcome to the March 2019 edition of Release Radar, where we share new and exciting releases—from world-changing technologies to weekend side projects. Most importantly, they’re all projects shipped by you.

And you’ve been very busy in March, with graphs, games, GIFs, and more!

Storybook helps you create and test UI components for React, Vue, Angular, and other libraries by writing stories—example states that illustrate your component’s use cases. Storybook 5.0 is the project’s biggest release so far, boasting a new look and feel, configurable keyboard shortcuts, a dark theme for those late night coding sessions, and much more.

TensorFlow.js helps you develop with machine learning for the browser or Node.js. TensorFlow.js can convert existing Python TensorFlow models or help you create, extend, or train new models in JavaScript. The project is celebrating its 1.0 milestone release with API stability and substantial performance improvements.

Quick is a testing framework for Swift and Objective-C that’s made for behavior-driven development. Quick 2.0 adds support for upcoming releases of Xcode, Swift, and Xcode’s faster New Build System, plus documentation and bug fixes.

Vega is a JavaScript library for creating declarative, interactive visualizations, from basic bar graphs to sophisticated maps. Vega is also meant to be the basis for higher-level visualization tools, such as Vega-Lite. The Vega 5.0 release has a host of new features, including more customizations for axes and legends, asynchronous evaluation, and much more.

Cataclysm: Dark Days Ahead is a roguelike, turn-based survival game set in the collapsed remains of society. We’ll let the game’s own description set the mood for you:

Struggle to survive in a harsh, persistent, procedurally-generated world. Scavenge the remnants of a dead civilization for food, equipment, or—if you’re lucky—a vehicle with a full tank of gas to get you out of this zombie apocalypse. Fight to defeat or escape from a wide variety of powerful monstrosities, from zombies, giant insects, and killer robots to things far stranger and deadlier, and against others like yourself.

Don’t forget to watch out for spoilers!

Did you know? Cataclysm: Dark Days Ahead inspired these 99 pull requests lyrics.

Other blips on the radar

GIPHY has released a deep learning model that can recognize thousands of celebrities’ faces, from 50 Cent to Zsa Zsa Gabor. The GIPHY Engineering blog went in-depth on how they trained their model, refined it, and tested it—showing how they got their impressive results (over 96% accuracy). Have fun and try out the GIPHY Celeb Detector.

Need a chart in a hurry? QuickChart has you covered with bar graphs, scatter plots, pie charts, QR codes and more—all from a URL. A free service built in response to the mid-March demise of Google Image Charts, the project is open source on GitHub so you can host it yourself.

Did you know? If this trend continues, we’ll be featuring a staggering number of image charts in Release Radar over the coming months and years.

You never know when a countdown script for your terminal will come in handy. This CLI app built with Go from @antonmedv does exactly what it sets out to do: set a reminder to check back on your CI build or coffee break. The script is easily executed using simple commands like countdown 25s && say "Coffee break’s over".

Maybe turn this off if you’re going through airport security though.