We’re spending Women’s History Month with women leaders who are making history every day in the tech community. Read more about Laura Tacho: director of engineering at CloudBees, a Docker captain, and containers and CI/CD specialist. 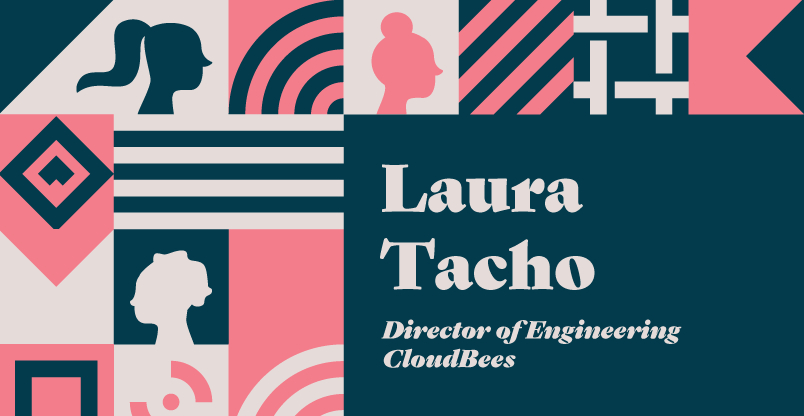 Every March we recognize the women who have shaped history—and now, we’re taking a look forward. From driving software development in large companies to maintaining thriving open source communities, we’re spending Women’s History Month with women leaders who are making history every day in the tech community. Laura is the Director of Engineering at CloudBees, a Docker captain, and specializes in containers and CI/CD. At CloudBees, her main focus is creating tools for other developers. She’s also worked on Docker developer tooling since its earliest days, co-maintaining open source projects that support Docker like Panamax and ImageLayers. Outside of developer tools, Laura loves cooking and still remembers most of the cheat codes for Doom.

I worked quite a few “software engineering-adjacent” jobs before finally getting into a position where my main job function was actually writing code that got deployed to the interwebs. I studied digital media communications (radio, TV, and film) in undergrad and was mostly focused on editing, and then later 2D animation. There’s code involved there, but it’s a bit different than software development.

My first pure development job was at a company that offered a digital solution for MSDS sheets—those documents that outline how to safely work with hazardous materials in places such as research labs, factories, or universities. Maybe not the most compelling thing at first glance, but it was proof of the digital transformation happening in all industries. In the past, you searched a binder for the safety sheet, and now it was possible to just search on your phone. And you can imagine that our databases were huge—there’s one of these sheets for every chemical and substance, even water, and they’re heavily regulated by the government. I learned some incredibly useful stuff about: working with enormous data sets, software development in a highly regulated industry, and customer empathy. It also made me appreciate agile methodologies later in my career.

What does leadership mean to you in your current role?

Leadership isn’t about being an expert; it’s about being an enabler. Specifically, in tech, I see people attracted to the management path for all of the wrong reasons—they want to make technical decisions, or they want to build things their way. I work tirelessly to pretty much do the opposite. I trust teams I work with to make the best decisions, and I want to make sure they are equipped with all the context and information they need in order to do just that.

“Leadership is about creating the space for other people to shine, setting direction for them, and inspiring them to become leaders themselves.”

It’s not about always getting your way!

Career-wise, I’m generally a risk-averse person, which is sometimes surprising given that I’ve spent the last six years working in a pocket of tech that is incredibly dynamic. Career risks were never really possible for me because, for a lot of my early career, I was just struggling to get by. That romanticized idea of “just quit your job and go for it” is such a joke, especially for folks around my age who went to college in the U.S. and graduated with a massive amount of student debt, just as the economy imploded on itself.

It wasn’t until I’d been working a while in tech—around 2013—that I felt established enough to leap somewhere that wasn’t a sure thing. At that time, I decided to leave HP Cloud and join a research and development team at CenturyLink Labs, working on Docker developer tooling in the very, very early days of the project. Looking back, it was probably the best career decision I’ve ever made, but it was uncertain to me at the time.

“I had to trust my own skills a lot—that even if the projects weren’t successful, that I was good enough and smart enough to move on to the next big thing.”

And it did come true as my whole team was inevitably laid off about a year later, after we’d proved our worth and received some brand recognition for CenturyLink Labs. I took another risk when I moved to CodeShip, as the startup scene really wasn’t my style. But I believed that in a smaller company, my ideas could have more impact, and I was right.

Want to know more about Laura? Follow her on GitHub or Twitter. And check back in soon—we’ll be adding new interviews with featured leaders for Women’s History Month every week in March.