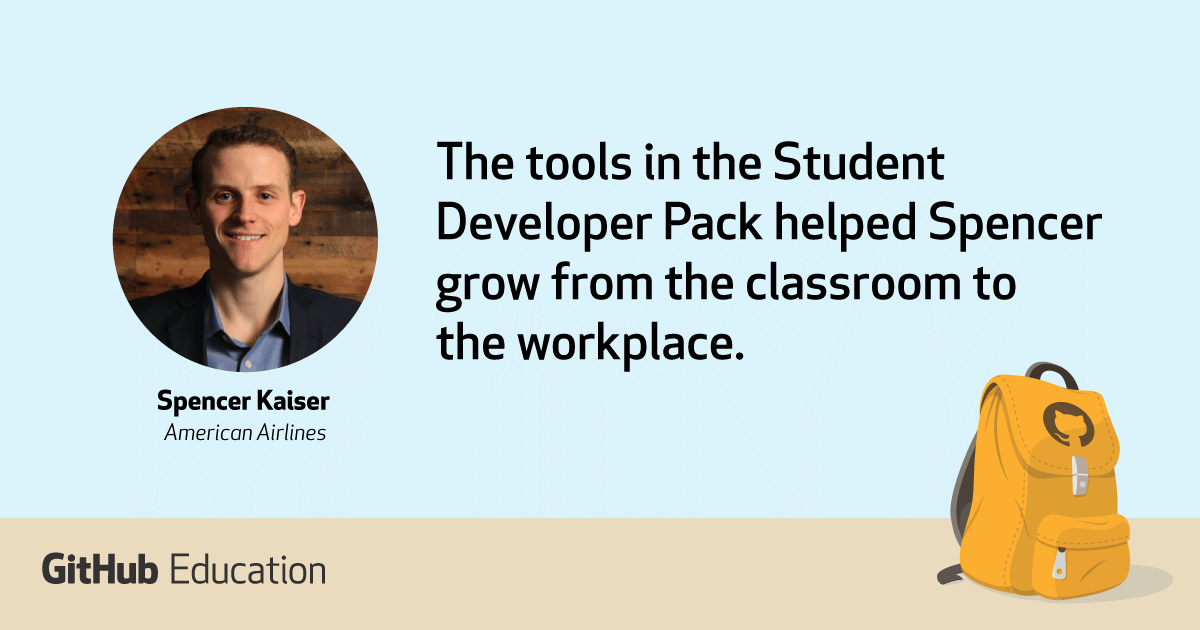 Students have access to more than just the best developer tools with the GitHub Student Developer Pack. Spencer Kaiser, Principal Architect of Emerging Technology at American Airlines and a keynote speaker at GitHub universe, says that the Student Developer Pack helped him see the big picture of software development.

Spencer didn’t start his educational or career path in software development—he started in marketing. And when he found himself in the workplace, opening Excel spreadsheets and doing the same things over and over again, he got frustrated. “I wanted to be able to automate that stuff, but I didn’t have the skills. And so that was kind of the start for me.” His frustration took him back to Southern Methodist University to study computer science.

Spencer went back to school without knowing anything about Git. During his class introduction to Git and GitHub, one of his instructors told Spencer and his classmates about the Student Developer Pack.

Getting a C++ program to compile and run for the first time was challenging. To build an actual app, with a frontend, backend, networking, and more? That seemed insurmountable. He recalled asking himself, “How am I going to get any of that set up? Being a student in that position, you have no idea.”

From GitHub, he grew to appreciate the Atom text editor, which he still uses daily. He also liked having private repos on GitHub—not just for keeping his assignments to himself, either. “It gave me inspiration,” he said, for side projects and “the next big idea”.

Spencer and his classmates used their DigitalOcean credits to deploy the LAMP stack—Linux, Apache HTTP Server, and PHP—for projects. He liked the speed and simplicity of getting started with DigitalOcean. You can’t learn a huge cloud platform like AWS overnight. “When you’re just getting started it’s really overwhelming,” but DigitalOcean gave him the cushion to try out new tools without going over his budget. He was also able to add some professionalism to his projects by registering a domain with Namecheap and sending emails via SendGrid.

Skills made to last

The tools in the Student Developer Pack helped Spencer grow. “It’s the stepping stones that help you get to where you’re actually productive.” And that productivity helped him go from a classroom to the workplace.

In his job at American Airlines, Spencer investigates emerging tech that could help improve the travel experience and make everyday tasks easier for his colleagues. “I’m responsible for identifying potential technology that American Airlines could adopt, either software or hardware infrastructure.” He told us that his team is working to make a big impact. “We’ve been investigating things like drones, computer vision, Internet of things, and machine learning.”

His experience with GitHub and the Student Developer Pack also helps him interview junior candidates. Spencer often asks questions about Git and GitHub, stressing how important it is for devs to collaborate, especially when joining a new team. He sees the difference between “it works on my machine” and experience with real-world tools. “You might kind of get the gist of it locally, but it doesn’t really start to make sense until you do it, end to end.”

What’s his advice to current students? Try out the Student Developer Pack. “The sooner that you get off your workstation, the faster you get to the next level of development.” 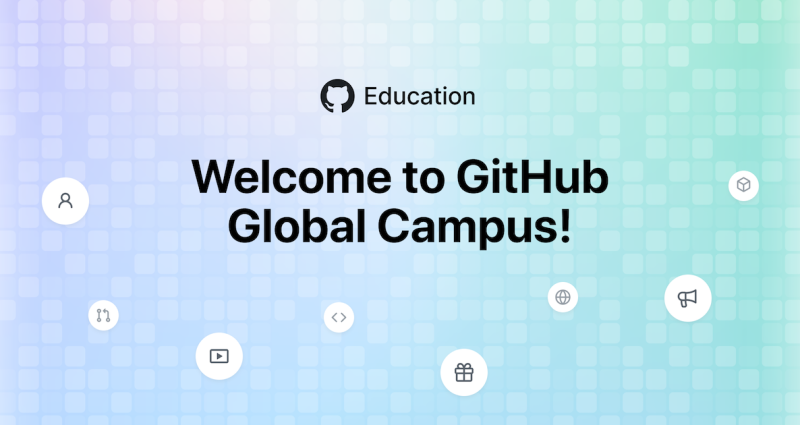 We're excited to announce the newest addition to the Student Developer Pack, the GitHub Virtual Event Kit! Access the best virtual event tools in one place at no cost.

How one student curbed panic buying with the Pack

Learn how Ben Sassoon used the Pack to curb panic buying during the COVID-19 pandemic.