A few years ago, I was the lead maintainer for a handful of popular open source projects on GitHub. As you might have guessed, sometimes the people who used those projects had complaints or questions. When they did, they’d open an issue to communicate with me and the other maintainers.

The issues came in just slightly faster than our team could reasonably keep up with them. Not that we got a lot of issues, we were just very busy with other things. To help keep the queue manageable, we created a triage system using issue labels. Triage is a process of sorting incoming responsibilities into categories—urgent issues, issues to address relatively soon, and those that can be addressed later. Issue labels provide a way to sort through our issues by urgency, allowing us to perform the triage quickly.

It was a good system, but applying triage labels was tedious. Although I am no longer working on these projects, my experience has inspired me to create a tool to automate the triage process. With the advent of powerful natural language processing (NLP) APIs like Recast.AI, we can determine which labels to apply to an issue automatically.

So let’s build such a tool, and automate issue triage. It’s not as hard as it sounds. The idea is that we write a GitHub App that listens for new issues to be created. Then:

I’ve selected these three labels for a specific reason. Although you can create whatever labels you like to use on your repository, these are the three labels that are available to all GitHub repositories by default. Therefore, we can reasonably expect that plenty of others have used these labels in their own repositories, and we are therefore assured to find a good amount of training data.

Which brings us to the other thing we need to build: A one-shot script that we can run that takes already-labeled issues on GitHub, and uses them to train a language model with Recast.AI.

The first thing to do is register our app with GitHub. For this tutorial, we’re going to use Ruby, and GitHub has an excellent guide to building your first GitHub App. Go ahead and work through the tutorial to get started; I’ll wait here, patiently.

Step 2: Create a bot on Recast.AI

Once you have a basic GitHub App ready to go, and you’ve registered with GitHub, it’s time to prepare a bot model on Recast.AI.

We begin by creating a bot on Recast.AI. Bots are projects designed for building fully interactive chatbots. Keep in mind, we’re only going to use a small subset of Recast.AI’s functionality.

One of Recast.AI’s core features is its ability to categorize expressions into defined intents. In our case, we are going to create one intent per label: One for bugs, one for enhancements, and one for questions. We need to train the model so that Recast.AI knows the difference between each intents.

Let’s continue by deleting any existing intents in Recast.AI. Then, create three new ones: 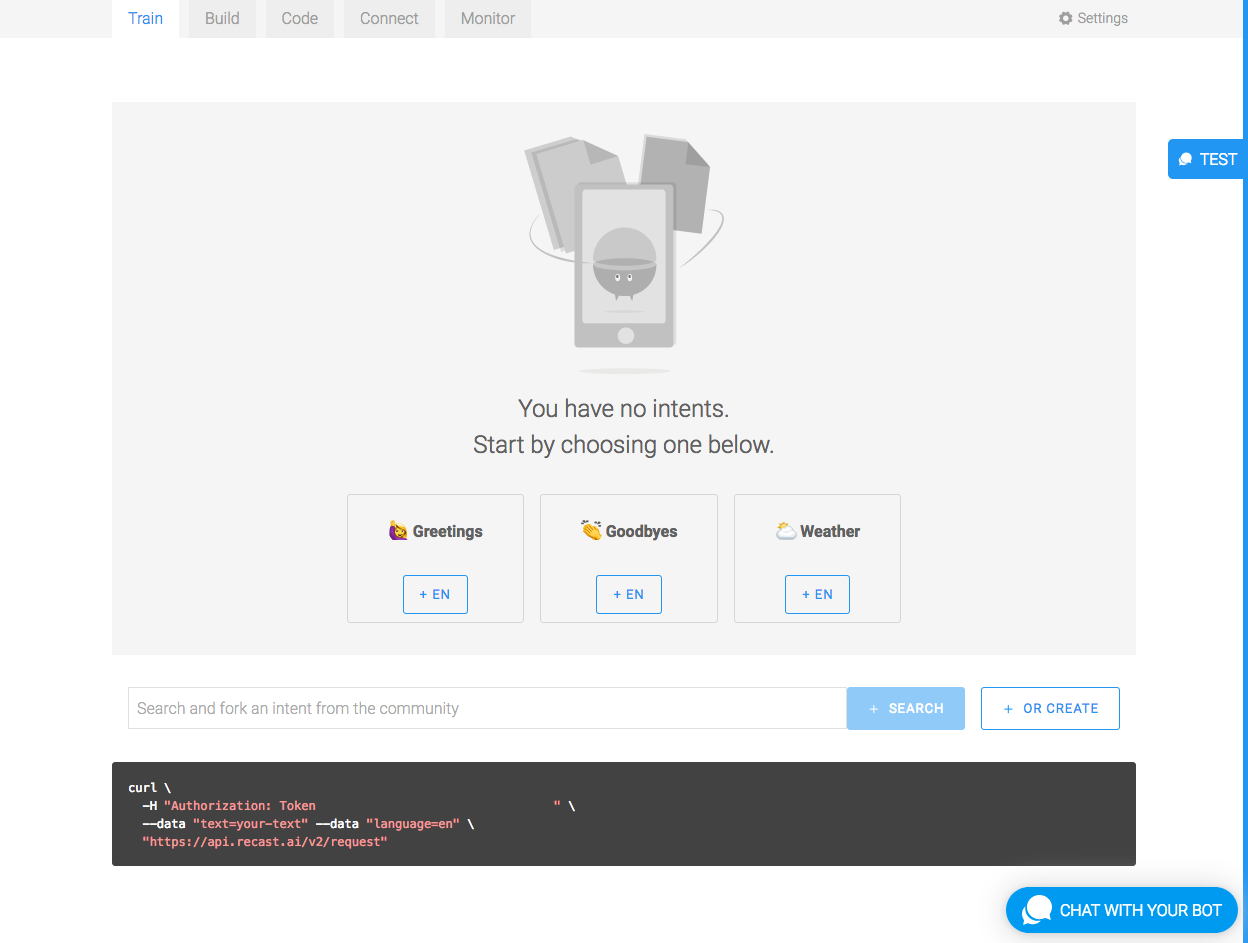 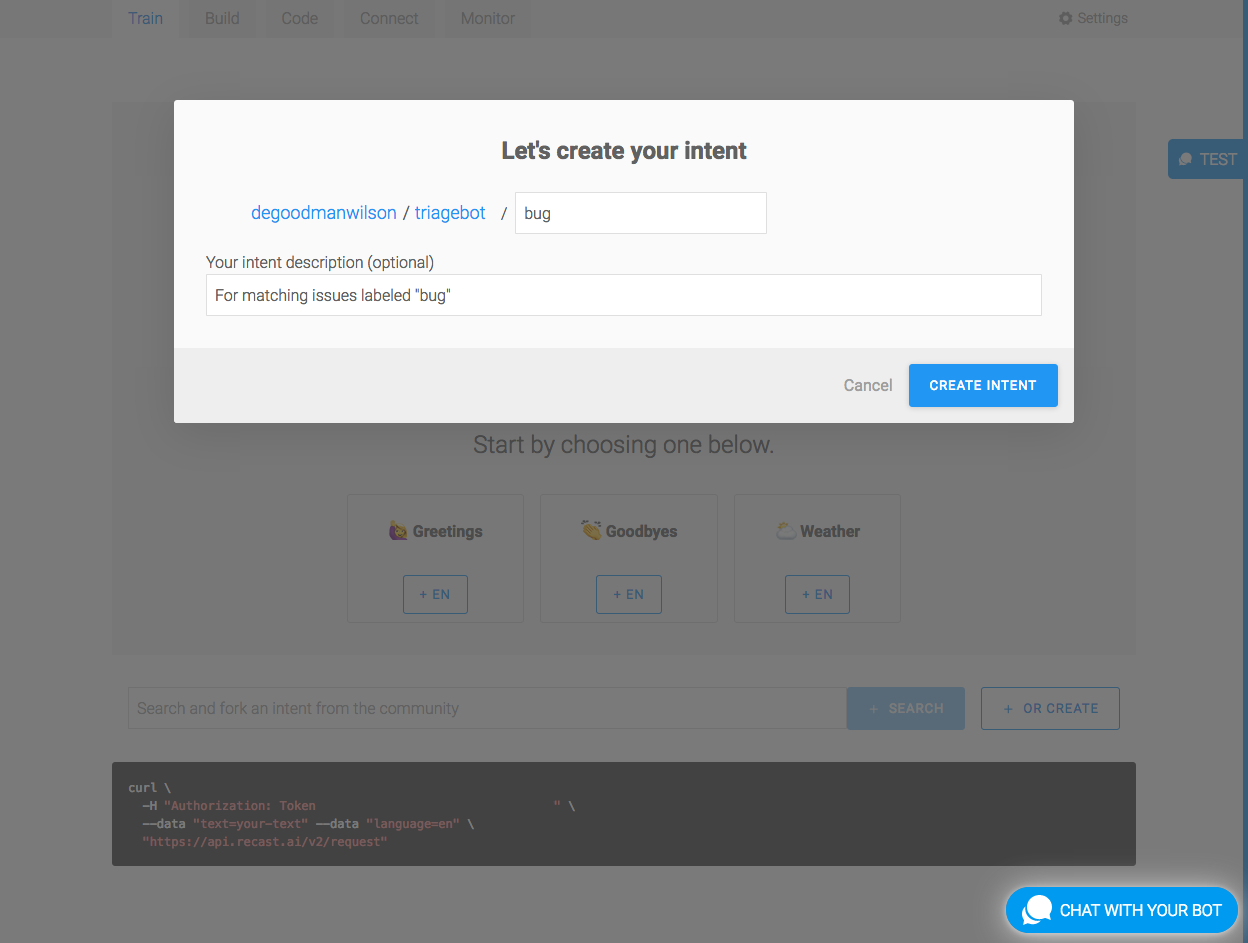 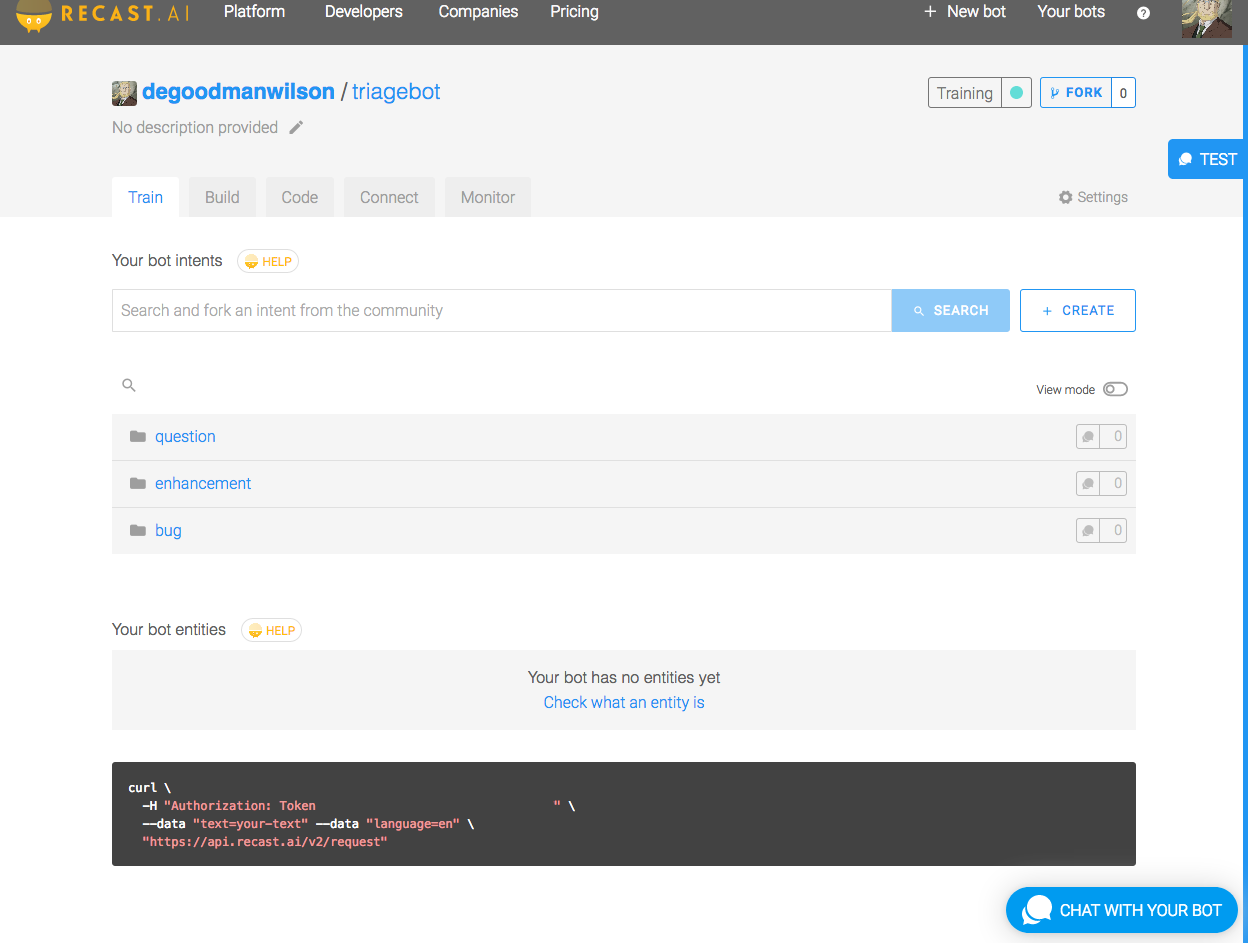 Finally, you’ll want to take note of both the “Request access token,” and the “Developer access token.” These tokens are available on the settings page of your bot. 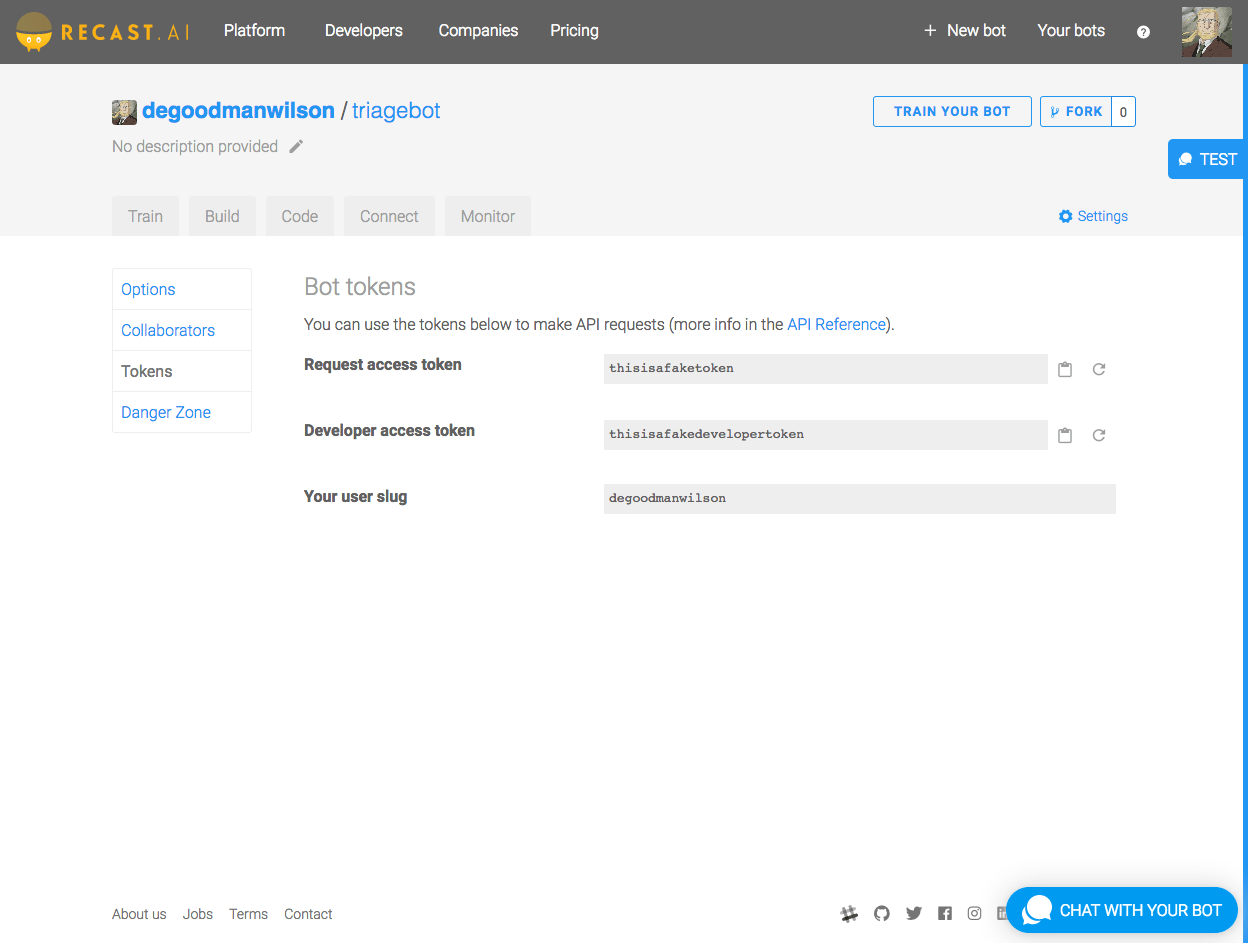 Let’s add them to our environment just like the variables we need for our GitHub App:

Step 3: Use the GitHub Search API to train our model

The first code we need to write is a one-shot script to train the bot we just created on Recast.AI. This script will go through the GitHub Search API, looking for issues that have been labeled bug, enhancement, and question. Then, the script will feed the issue titles to Recast.AI.

You’ll need to install the octokit and HTTParty gems if they’re not already installed on your system:

Then you can run the following script directly from the command line:

At its heart, this script calls the GitHub Search API, searching for issues tagged “bug”, “enhancement”, and “question”, then pages through the results. As simple as this is, there are two complicating factors that we’ll go over.

The first is that GitHub returns only 1,000 results. I don’t want to hardcode this limit, in case it changes. GitHub responds with a 422 error if we try to page beyond the number of results allowed. We can take advantage of that by simply paging through the results until we receive the 422 error—that’s when we know we’re done.

The second complication is that the Search API is rate limited. We get a better rate limit if we authenticate, and you can see how that process works from the version in the triagebot repo. However, the standard rate limit is 10 requests per minute. This means that we need to wait six seconds between requests. Thus, we need to measure how long it takes to make and process each call (including the resulting calls to Recast.AI!), while simultaneously sleeping a bit between calls to avoid hitting the rate limiter.

There is a further complication with kernel#sleep in that it only guarantees that it won’t sleep more than the requested time. But it might sleep less, which means we may still hit the rate limiter. We know we’ve reached the rate limiter when GitHub returns a 429 error. If this occurs, we can simply wait for another 6 seconds. A better strategy for apps that might hit the rate limiter would be to use exponential backoff, where we wait a small amount of time, and increase that amount of time each time we get a 429 error. This exponential backoff strategy would be overkill for what we’re trying to accomplish with this script, so I’ve kept things simple.

The other key element is sending the issue title and label to Recast.AI for training. We rely on HTTParty to call the RecastAI /expressions/bulk_create endpoint, allowing us to batch send 100 tagged issue titles (since that’s what we get back from GitHub with each call to the Search API).

You’ll notice that Recast.AI requires us to indicate the language of the issue title. For now, let’s assume that it’s English—although this is generally a false assumption. The full code shows a more nuanced approach that we can take to estimate the language.

Once you’ve run the script, you should have a trained NLP model ready on Recast.AI. Let’s return to the GitHub App that will use this model.

Step 4: Build an App that uses your model to label new issues

Now we need a GitHub App that listens for newly-opened issues, uses Recast.AI to classify the issue title, and attaches a new label to the new issue based on the classification.

Because GitHub events arrive over HTTP as calls to a webhook we provide, we’re going to use a web framework like Sinatra or Grape. For this instance, we’ll use Sinatra.. The script below builds on the code in the guide to building your first GitHub App, so if you have that running, you can replace the code with the following:

All the webhook handling happens in the post '/' block above.

The real magic happens in handle_issue_opened_event. This is our helper function that is invoked when we receive an issue event with action opened. It begins by extracting some necessary information from the event—the repository name and issue number, as well as the issue title. That title is then sent to Recast.AI via their Ruby SDK. Recast.AI classifies it based on the model we’ve previously built—these classes are called “intents”—and assigns a probability to each intent it decides might fit. We need to find the intent with the greatest probability. When we do, we use that intent to label the issue by calling the GitHub Issues API.

That’s it! At its core, triagebot has only a handful of moving parts, but there are a few complications that have to be addressed. Now that we’re done, we have a reasonably competent system for automatically triaging incoming issues.

What’s next? Triagebot can be improved in a number of different ways:

Want to see the code for yourself? Visit my triagebot repo to see the full codebase, including a little more nuance and detail than I’ve provided in this post. It’s open source, of course, so take, use, and build something cool!

Let us know what you’ve built using this guide. Find us on Twitter at @GitHubAPI or email us at developer@github.com. Or meet other GitHub developers, share what you’ve built, and get help with your questions on the GitHub API Development Community Form.

If you have any questions regarding Recast.AI, join their Slack Community for technical support from the team, and follow them on Twitter at @RecastAI.