How developers can defend open source from the EU copyright proposal

Recap of our event with HackerOne, Wikimedia, Reddit, and the Electronic Frontier Foundation (EFF), about the effects of the EU copyright proposal and what exactly the EU Parliament will vote on this Wednesday. 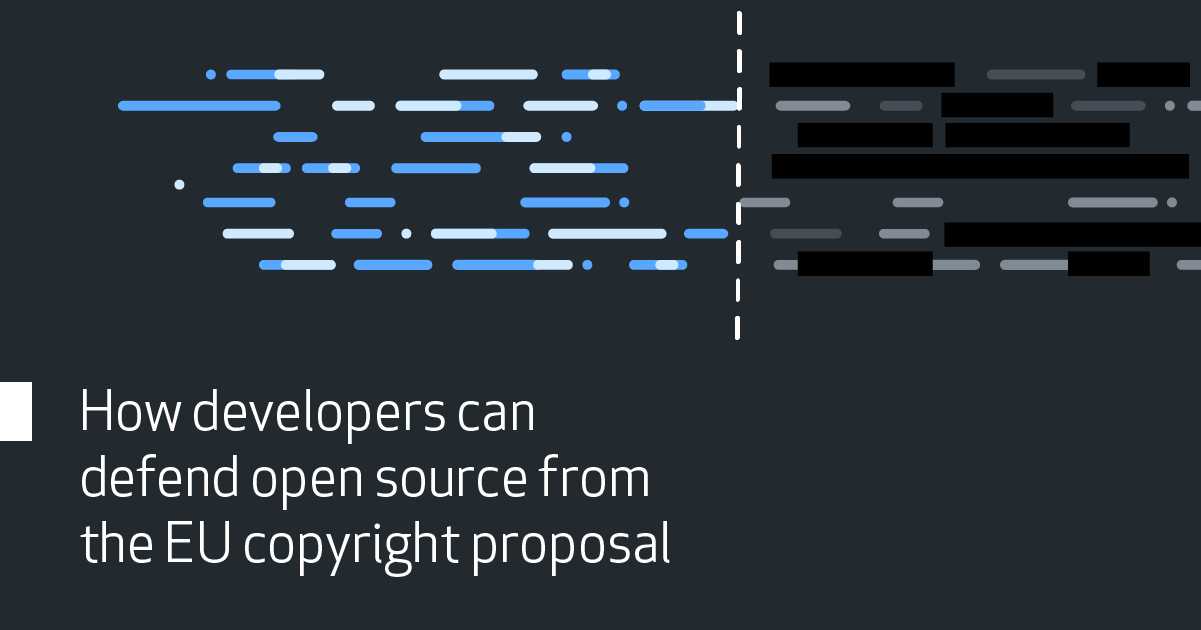 On September 12 the European Parliament will vote on amendments to the EU Copyright Directive, which will greatly impact the future of open source, European competitiveness, and software development in general. We urge you in the EU to contact your Members of European Parliament (MEPs) to tell them how important open source is to all software development and to the EU. Check out our previous post for background and talking points.

Read on for details on the implications for software and society, key amendments being voted on, and how you can make a difference.

On September 5, we hosted HackerOne, Wikimedia, Reddit, and the Electronic Frontier Foundation (EFF) at our San Francisco office for the event How developers can defend open source from the EU copyright proposal, addressing the many EU developers working in the Bay Area.

We kicked off the event with our own Julio Avalos giving a big-picture look at where this proposal fits into the tech policy landscape. We explained that the copyright proposal would affect developers by requiring upload filters (Article 13), imposing a “link tax” (Article 11), and leaving text and data mining restricted (Article 3). Mårten Mickos, CEO of HackerOne, emphasized the proposal’s impacts on open source software for HackerOne and in the EU. Then, we moderated a panel with Wikimedia Foundation’s Senior Public Policy Manager, Jan Gerlach, Reddit’s Director of Policy, Jessica Ashooh, and EFF’s International Director, Danny O’Brien covering their communities’ involvement in advocacy and their thoughts on future implications of the proposal.

For example, recognizing that copyright law in many ways hasn’t kept up with the digital age, Wikimedia identified priorities for copyright reform, including protecting the public domain and freedom of panorama, as well as allowing sufficiently broad exceptions to copyright for user-generated content and for text and data mining. Learn more on their Fix Copyright landing page.

Our call to action at the event was the same as it is here: Developers, tell your MEPs to protect software.

What Parliament will decide on September 12

So what exactly is Parliament voting on? The September 12 vote is not a simple yes or no—it’s actually quite complex. MEPs will vote on a number of amendments to the full directive that the EU Commission proposed two years ago. From the perspective of protecting software development, we offered our thoughts on what developers could tell MEPs that might be useful.

For an open internet

While there’s a lot to be concerned about in the Copyright Directive, it’s important to recognize the need for positive copyright reform that reflects the digital world developers are creating. Some amendments reflect this reality, like articles on freedom of panorama and exclusion of user-generated content, which are in the IMCO/LIBE and Schaake amendments.

There’s still time to contact your MEPs before they vote on Wednesday! Developers have an important role to play in explaining how software works and what’s at stake. Contact us if you need more information about the EU Copyright Directive.