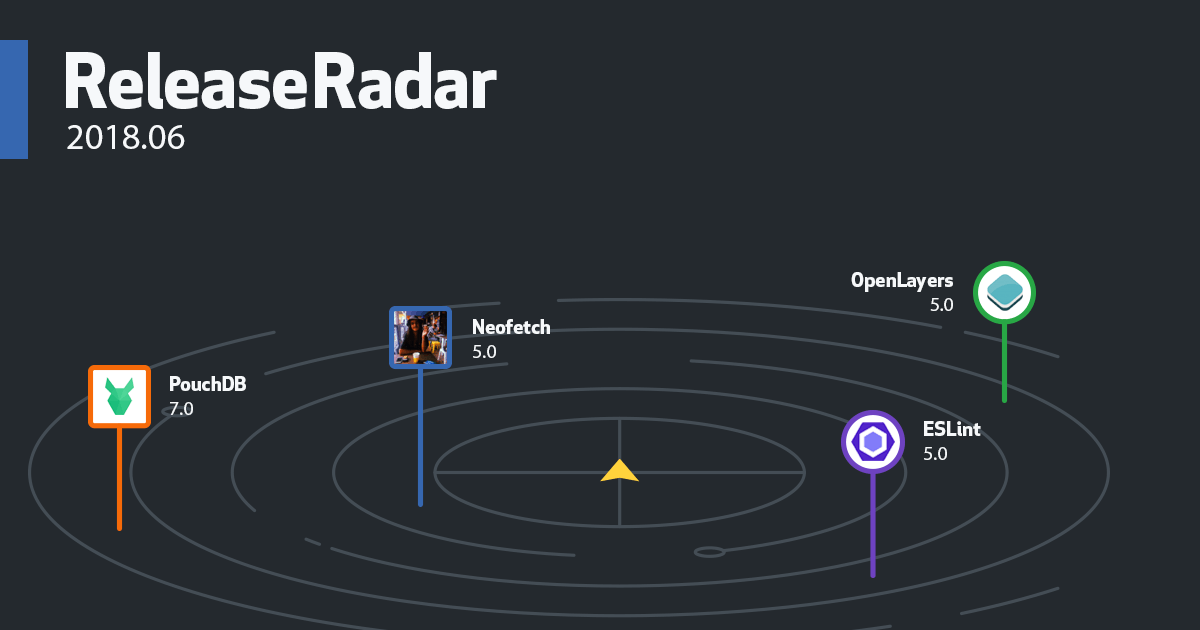 From code style to Minecraft, we’ve got another round of releases that caught our attention. Here’s a small sample of all the great open source releases that were published on GitHub in June.

PocketMine-MP is a server for Minecraft Pocket Edition written in PHP. It lets you rule your own Minecraft universe by running multiple worlds, plugins, and gameplay customizations. The latest release features a new dependency aimed at improving performance, and fixes for many gameplay bugs. For example, Minecraft gardeners will be pleased to know that “saplings now take light level into account when trying to grow.” Read the release notes for details.

Did you know? If you search deep enough in our code mines, you’ll discover a treasure chest of Minecraft mods, plugins, and more to do things like generate colonies, disguise yourself as Hubot, and even visualize and manage your Docker containers. View the #minecraft topic to discover more.

OpenLayers is a JavaScript library that helps you put maps on the web using tiles, vector data, and markers from any source including OpenStreetMap, Bing, MapBox, and others. The version 5.0 release of OpenLayers has been restructured to remove the Closure Compiler as a dependency, improving compatibility with popular JavaScript module bundlers and fixes a bunch of bugs. Check out the OpenLayers 5.0.0 release notes for more.

Did you know? Null Island is very popular for a place that doesn’t exist. (Get it?)

Want to show off your system’s specs? Then you might want to give Neofetch a try. It’s a command line tool that summarizes your operating system, software, and hardware in a style fit for a screenshot. Neofetch 5.0 had a significant internal rewrite, cleaning up a lot of code along the way. This release also adds support for several new operating systems, adds a new output format (JSON), and improves the performance of image handling. See the release notes on GitHub for a detailed breakdown of what’s changed.

Did you know? The Neofetch source contains an impressive collection of ASCII art operating system logos.

PouchDB is a database that runs in the browser and syncs with CouchDB. The latest release, version 7.0, trims the library’s size by dropping support for the deprecated Web SQL API and its own Promises polyfill. The release also ships new behavior for determining revisions, reducing the likelihood of conflicts when syncing, and lots of bug fixes. Check out the release announcement for more information.

Did you know? PouchDB is based on Apache CouchDB, an open source NoSQL document database.

ESLint is a static analysis tool that checks your JavaScript source for stylistic errors and suspicious code for the pedant in all of us. ESLint 5.0 adds new rules, improvements to existing rules, and several bug fixes. This release does have some changes that break compatibility with past versions, so you might want to look at the migration guide in addition to the release blog post.

Did you know? The original lint program was invented at Bell Labs in 1978 by Stephen Curtis Johnson.

GitHub for Unity is joining the 1.0 club with its latest release. GitHub for Unity brings GitHub, Git Large File Storage, and file locking to game developers as a Unity editor extension. The latest release lets you choose your own diffing tools, has a smaller package size, a Git action bar for essential tasks, and numerous bug fixes. Take a look at this blog post for the complete story.

Did you know? The game shown above, and in the Unity for GitHub website, uses a game called Throwback created by @Gipzo for last year’s Game Off competition.

Congratulations are in order to Neural Network Libraries, which also joined the 1.0 club in June! Living up to its name, Neural Network Libraries make it easier to work with neural networks. The latest release improves compatibility with different operating systems and Python versions. What’s more, the project has improved performance and has added support for Nvidia Tensor Cores. See the project’s release announcement for a summary of what’s changed.

That’s just a handful of releases you shipped last month. If you’ve got a release that should be on our radar, send us a note.