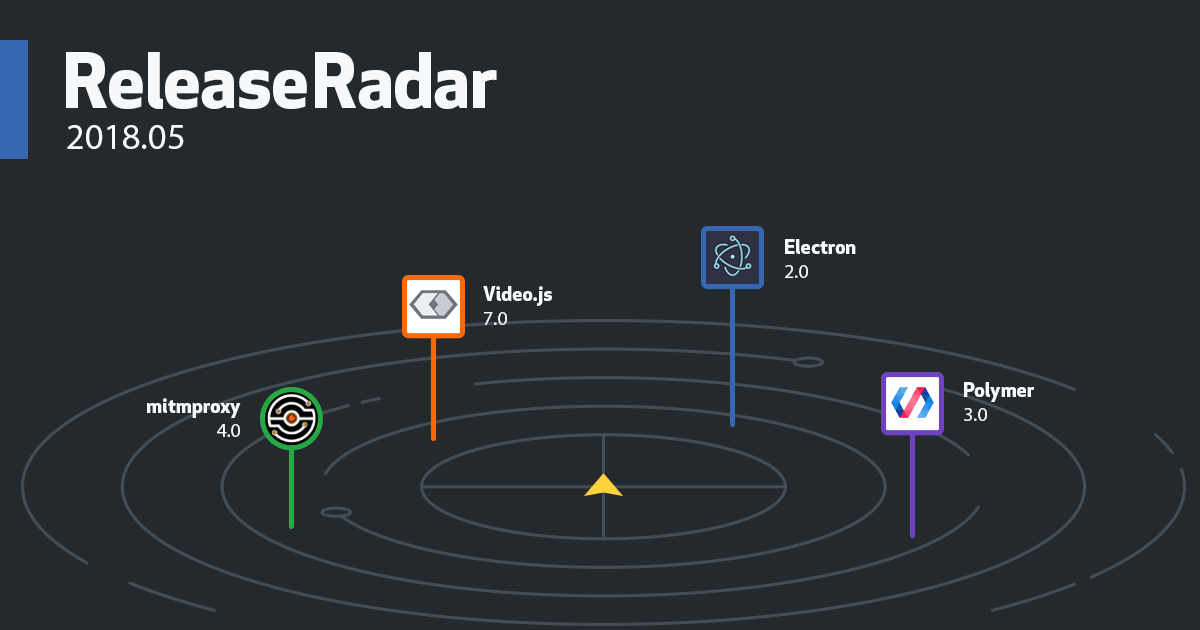 You may have noticed there were a lot of great open source releases this past month. Here are a few of our favorites.

mitmproxy is a versatile and interactive man-in-the-middle proxy for HTTP and HTTPS traffic, letting you inspect, modify, and play back web traffic. The latest release, mitmproxy 4, sees substantial speed increases and other improvements, such as new keybinding configuration and support for Python versions 3.6 and above. Read the project’s release blog post for more details.

Did you know? mitmproxy has been used to help discover many security vulnerabilities. Learn more about them on mitmproxy’s publications page.

Electron is a framework for developing desktop apps with JavaScript, HTML, and CSS. Electron has recently shipped version 2.0, which marks the beginning of Electron’s adoption of Semantic Versioning and a new process for pre-release stability. Head over to the Electron blog for more details.

Did you know? Electron was used to build things like the Slack, Atom, and Discord desktop apps.

spin.js is a JavaScript library for creating spinning activity indicators. To improve performance, the latest release uses CSS keyframes to run animation. Check out the release notes on GitHub for more information.

Rancher is an open source container management platform. The latest release, Rancher 2.0, supports Kubernetes exclusively and adds a host of new features, including a CI pipeline and interoperability with Kubernetes services offered by cloud services providers. It’s a big change for the project, so check out the release announcement and project docs for more information.

Nest is a framework for building server-side Node.js applications. The project recently released version 5, which unveils changes like supporting async lifecycle hooks and HTTP server independence, plus bug fixes and other improvements. See the release notes for more.

Nuke is an image loading and caching library for writing iOS and macOS applications. Nuke 7 introduces support for new formats (progressive JPEG, WebP, and GIF), resuming downloads, and performance metrics. Refer to the extensive release notes for all the details.

Pendulum is a library that extends Python’s date and time handling, adds a friendly timezone API, and more. Pendulum 2.0 now supports year and month durations, parses ISO 8601 durations, and renames some parts of the API.

See the Pendulum blog for a complete breakdown.

Vapor is a Swift language web framework. Its newly-released version 3.0 now runs completely async (for handling higher levels of concurrency) and dispenses with JSON configuration files in favor of a pure Swift approach. Read the announcement on Medium to learn more about this release!

Lemonade, a home and renter’s insurance company, released the first-ever open source insurance policy. The goals of Policy 2.0 are to both make insurance policies dynamic, digital first, and easy to understand for consumers. Check out Lemonade’s Policy 2.0 blog post to learn more.

The Polymer library helps you make custom web elements that behave like regular DOM elements. Polymer 3.0 adopts a few mainstream JavaScript development tools, like ES6 modules and npm. Check out the release announcement on their blog or watch their roadmap talk.

Did you know? True to its name, the Polymer Project is made up of several other parts, including PWA Starter Kit and Material Web Components.