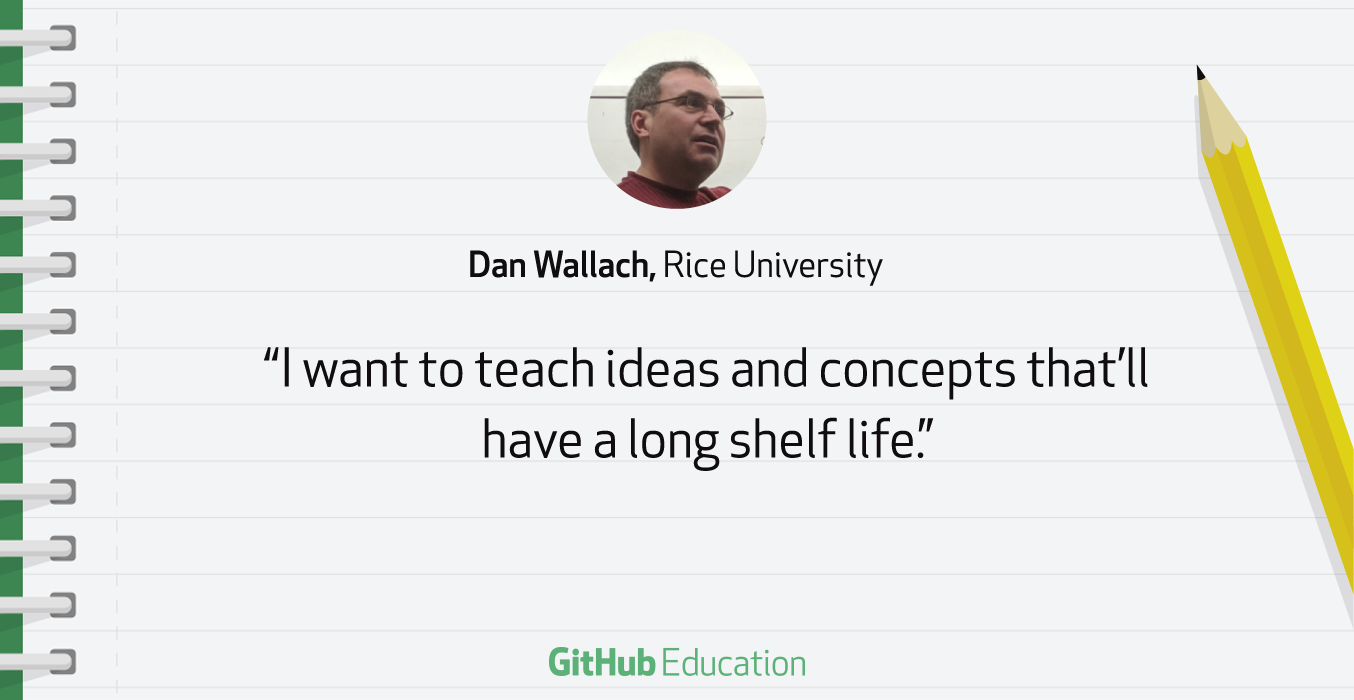 In the third programming course in the computer science major, Dan Wallach wants students to master programming in Java with a high degree of rigor and at a large scale. This past semester in his Comp215 course, he chose to use Java8, IntelliJ, and GitHub to implement a test-driven development workflow.

Wallach encourages his students to focus less on specific tools and more on their fundamentals. “I want to teach ideas and concepts that’ll have a long shelf life. So 10 years from now, is IntelliJ going to be the thing? Is Java even going to be the thing? Probably not,” he said. “But mapping a function over a list to get another list, that will be there 10 years from now.”

Moving from Subversion to GitHub with Travis CI

Dan was looking for a scalable, reliable solution for his course: In 2015 the peak loads from his students’ work crashed their campus Subversion server, forcing them to extend their deadlines and ultimately run a private server, requiring significant assistance from Rice’s IT group.

He decided to move to GitHub and use GitHub Classroom in the fall of 2017.

I had confidence that GitHub would make sure their service would be up and available. Their commercial business depends on high uptime.

I was initially worried that the complexity of Git would be a pain point for my students. As an example, I was afraid of having to explain to a student what a “detached HEAD state” might be. In practice, this was never an issue. We steered students to using IntelliJ’s front-end for Git, keeping them from getting into too much trouble. It’s a nice bonus that students can visit the web page for their repo and double-check that everything was correctly pushed. 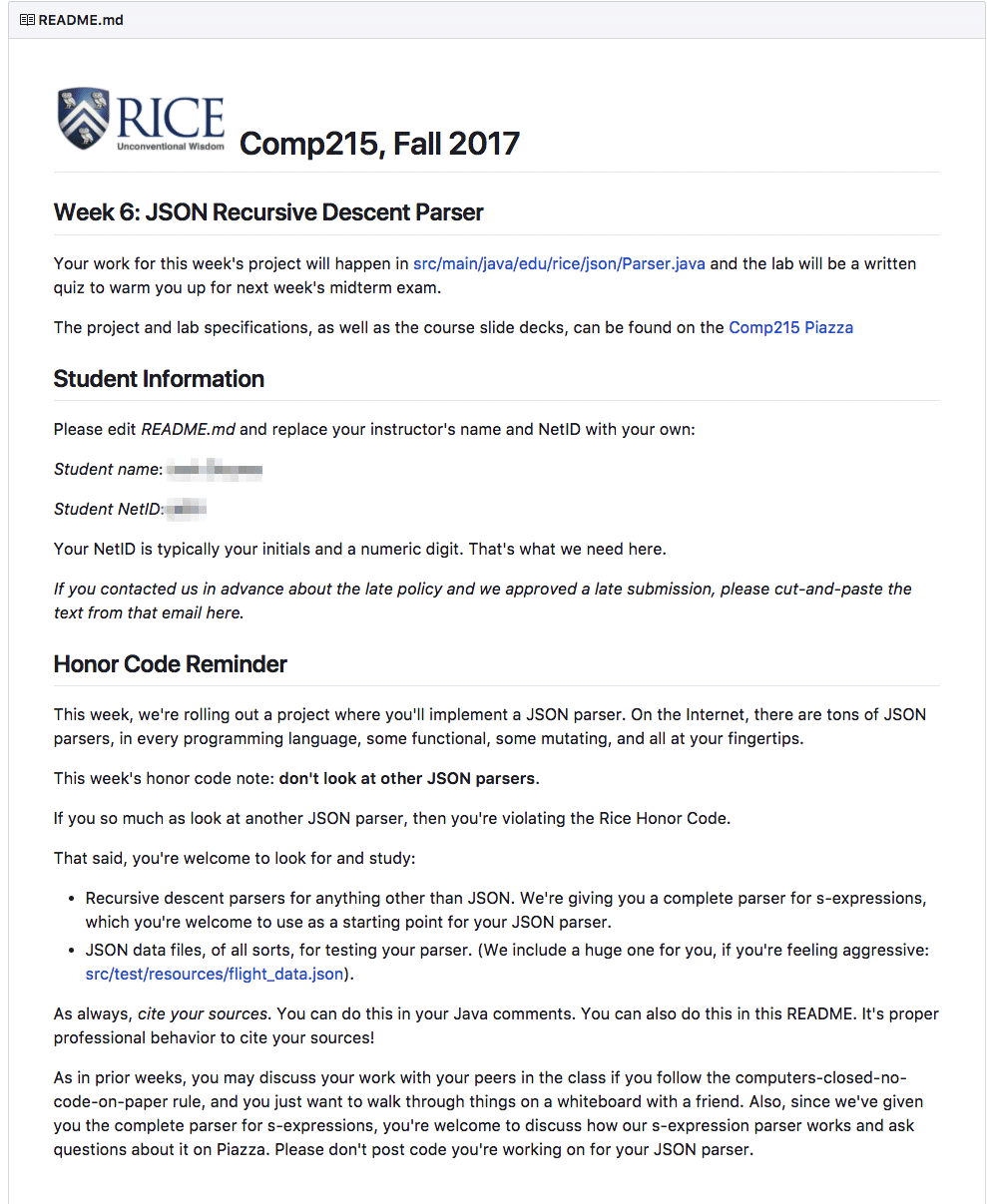 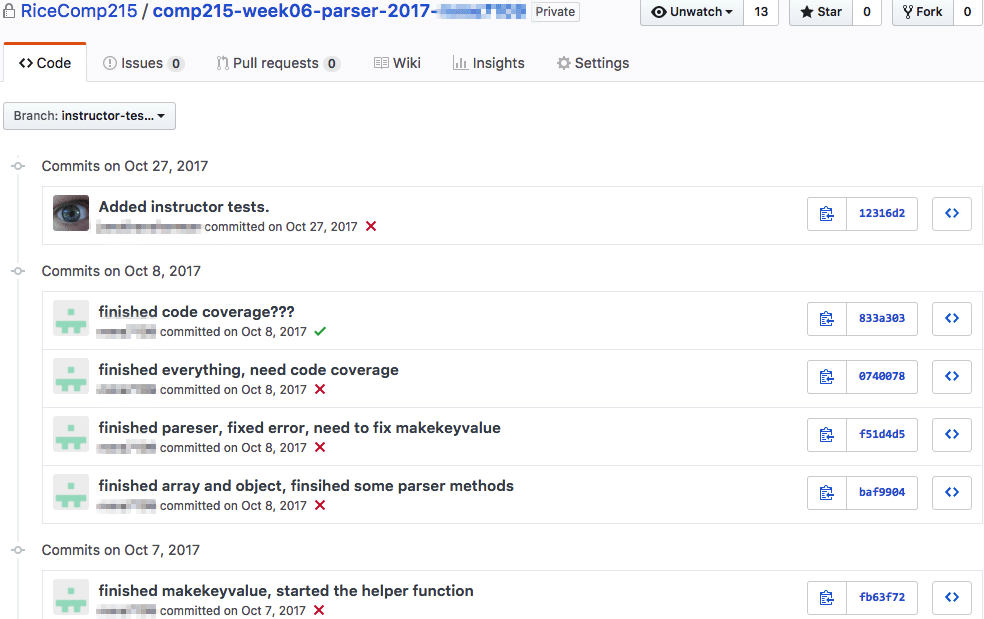 An example of distributing an assignment through GitHub Classroom and tests through Travis CI.

Nurture collaboration through filling in holes

As the semester progresses, his students get better at “filling in holes,” Wallach said. Initially, Wallach provides his students with code that has missing pieces.

After they fill in those holes with their own code, he introduces a more complex activity: Build an application from the library of code they’ve previously helped build.

“Every week builds on the previous week. I give you a bunch of code including a correct implementation of the prior week’s project, you write tests and add missing features, and then you submit it,” he explained.

Laying the groundwork for strong collaboration

Wallach has what he calls a “controversial” position on pair programming: He doesn’t use it in his classroom. He sees pairing as only one path to collaboration.

“Learning to use Git, from scratch, is hard enough without collaboration,” he said. He’d seen his students try to pair while learning Git:

While that back and forth is a kind of collaboration, Wallach wants to set students up for success.

There’s plenty enough to learn about version control systems in a solo environment. Comp215 is many of our students’ first experience using development tools on their own computer, as opposed to in a browser. Partner-based collaboration with Git requires a more sophisticated understanding to deal with merge conflicts, pull requests, and so forth.

By having his students work by themselves first, Wallach prepares them with the habits and mental models for subsequent classes in the curriculum where they work in teams.

Contributing back to the GitHub Education community

Wallach built several scripts to help with his class workflow and shared them with the GitHub Education community. For example, Git takes its commit times from the clock on the students’ computers. When Wallach spotted a student attempting to use this to submit after a deadline—using his Travis CI/GitHub workflow which logs the time on Travis and cannot be forged by a student—he made a tool to produce a nice table with a given student’s commit times and GitHub’s push time.

Wallach encourages collaboration through his GitHub contributions and his classroom. And his groundwork has paid off. He often hears from past students that his class prepared them for a workplace environment. By teaching skills that have a long shelf life, Wallach’s students feel ready to collaborate in the long term.

Here are some of Wallach’s helpful contributions to the GitHub Classroom community of tools:

Are you a student in India? Applications are open for the GitHub Externships Winter Cohort!

In case you missed it, GitHub Education at Universe 2021!

A recap of all the GitHub Education news from Universe 2021, including the new Intro to Web Dev Experience.