In honor of our Bug Bounty Program's third birthday, we kicked off a promotional bounty period in January and February. In addition to bonus payouts, the scope of the bug… 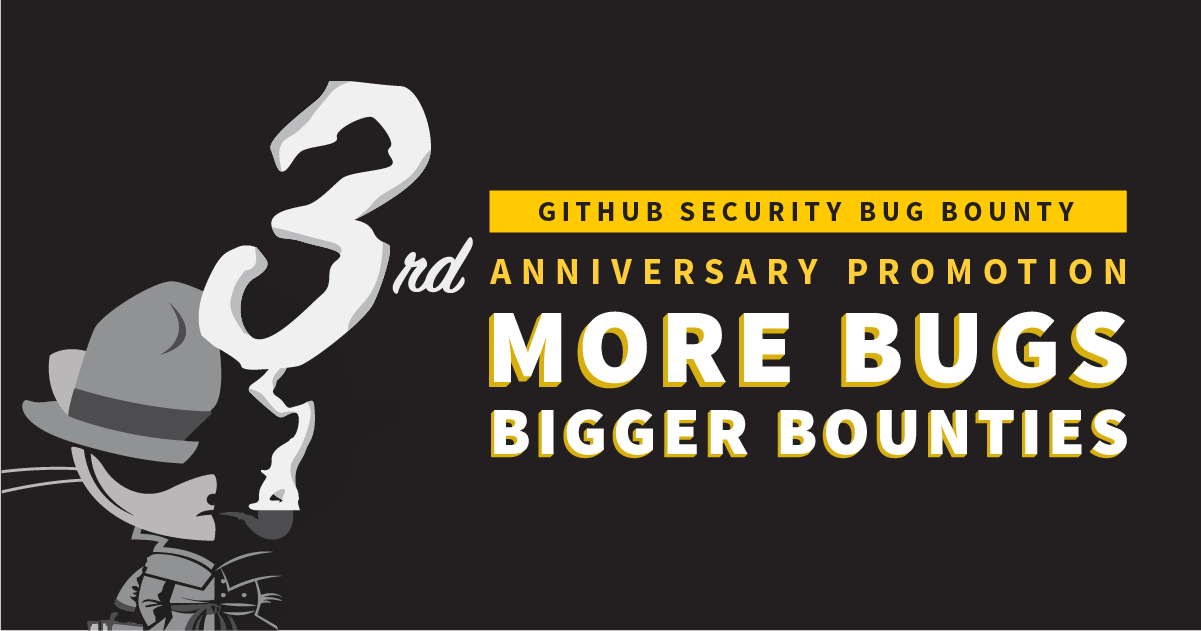 In honor of our Bug Bounty Program’s third birthday, we kicked off a promotional bounty period in January and February. In addition to bonus payouts, the scope of the bug bounty was expanded to include GitHub Enterprise. It may come as no surprise that including a new scope meant that the most severe bugs were all related to the newly included target.

There was no shortage of high-quality reports. Picking winners is always tough, but below are the intrepid researchers receiving extra bounties.

The first prize bonus of $12,000 goes to @jkakavas for their GitHub Enterprise SAML authentication bypass report which allowed an attacker to construct a SAML response that could arbitrarily set the authenticated user account. You can read more about the story on their blog.

The second prize bonus of $8,000 goes to @iblue for their remote code execution bug found in the GitHub Enterprise management console. This was due to a static secret mistakenly being used to cryptographically sign the session cookie. The static secret was intended to only be used for testing and development. However, an unrelated change of file permissions prevented the intended (and randomly generated) session secret from being used. By knowing this secret, an attacker could forge a cookie that is deserialized by Marshal.load, leading to remote code execution.

The third prize bonus of $5,000 goes to @soby for their report of another GitHub Enterprise SAML authentication bypass. This attack showed it was possible to replay a SAML response to have our SAML implementation use unsigned data in determining which user account was authenticated.

The best report bonus of $5,000 goes to @orangetw for their report of Server-Side Request Forgery. This report involved chaining together four vulnerabilities to deliver requests to internal services that end up executing attacker-controlled code. The reporter supplied a clear explanation of the problem through each step and included proof-of-concept scripts for the entire journey. While this report did not earn a prize for being the most severe, it is exactly the type of report we want to encourage reporters to submit.

We received a wonderful Christmas gift from @orangetw with a SQL Injection bug on GitHub Enterprise. You can read more about how they learned Rails in three days before finding the bug.

A theme we’ve seen continue over the years is paying out for bugs that aren’t in our own code but in browsers. 2016 was no exception with @filedescriptor‘s report of funky Internet Explorer behavior detailing how a triple-encoded host value in a URL is handled in redirects.

Lastly, Unicode gonna Unicode. @jagracy found a way to exploit the way Unicode was normalized in our code and in our database engine to deliver password reset emails to entirely different addresses than what were intended.

Our “Two Years of Bounties” post has detailed stats for our submissions during the first two years of the program. These years saw a total payout of $95,300 across 102 submissions out of a total of 7,050 submissions (1.4% validity rate). So far in the third year of the program, we have paid out for 73 submissions for a total of $81,700. Many of these reports fall into our “$200 thank you” bucket. These are issues that we do not consider severe enough for an immediate fix, but that we still want to reward our researchers for. Forty-eight of these issues were deemed high enough risk to warrant a write-up on https://bounty.github.com. We saw a total of 48 out of 795 valid reports, bringing our validity rate to 6%. 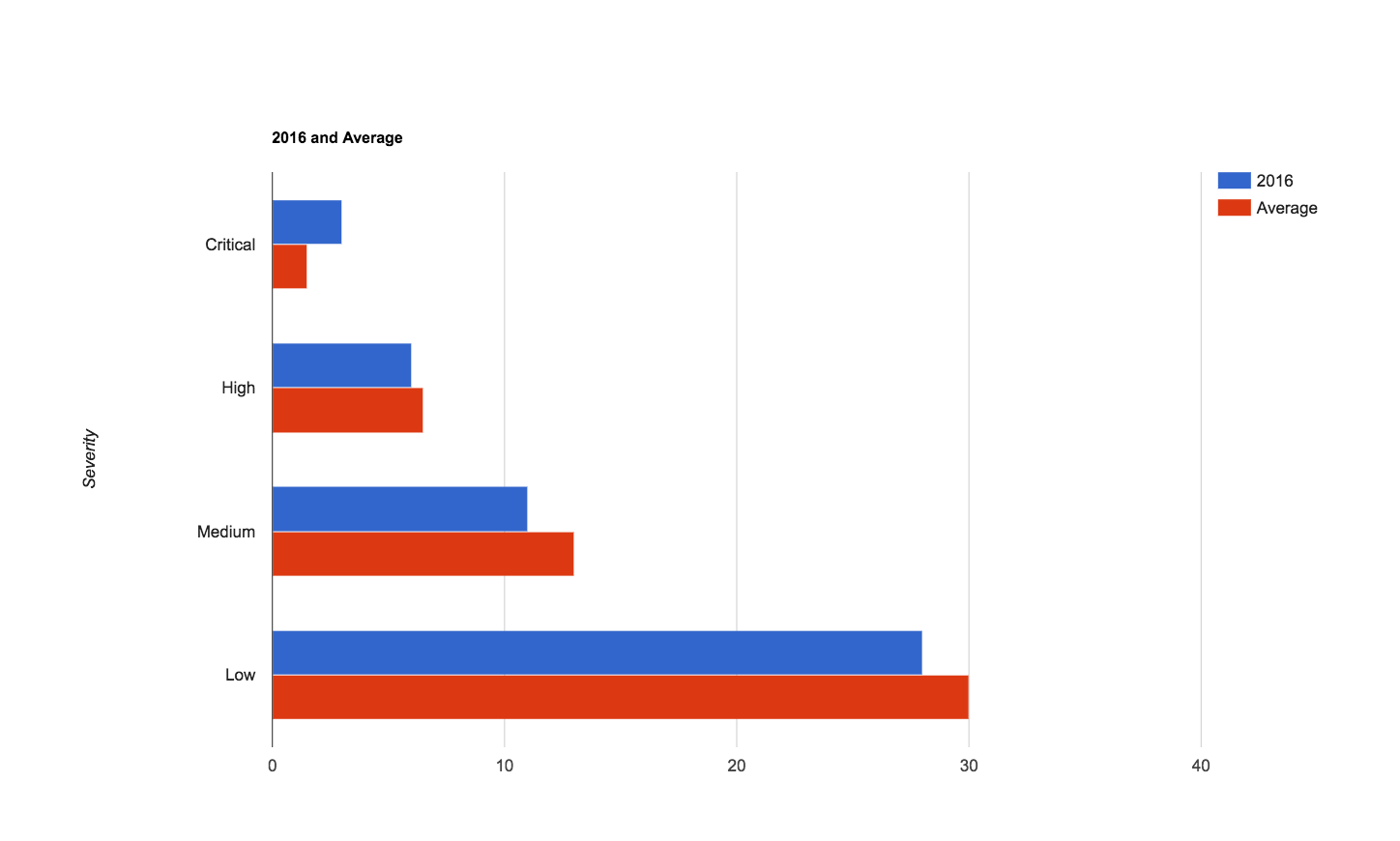 Out of the accepted reports, we saw some notable changes in the type of vulnerability reports submitted. Many categories such as XSS, Injection, and CSRF saw a decrease in reports. Notably, the number of valid CSRF reports for 2016 was zero. At the same time, we saw an increase in session handling bugs, sensitive data exposure, and missing function level access controls. 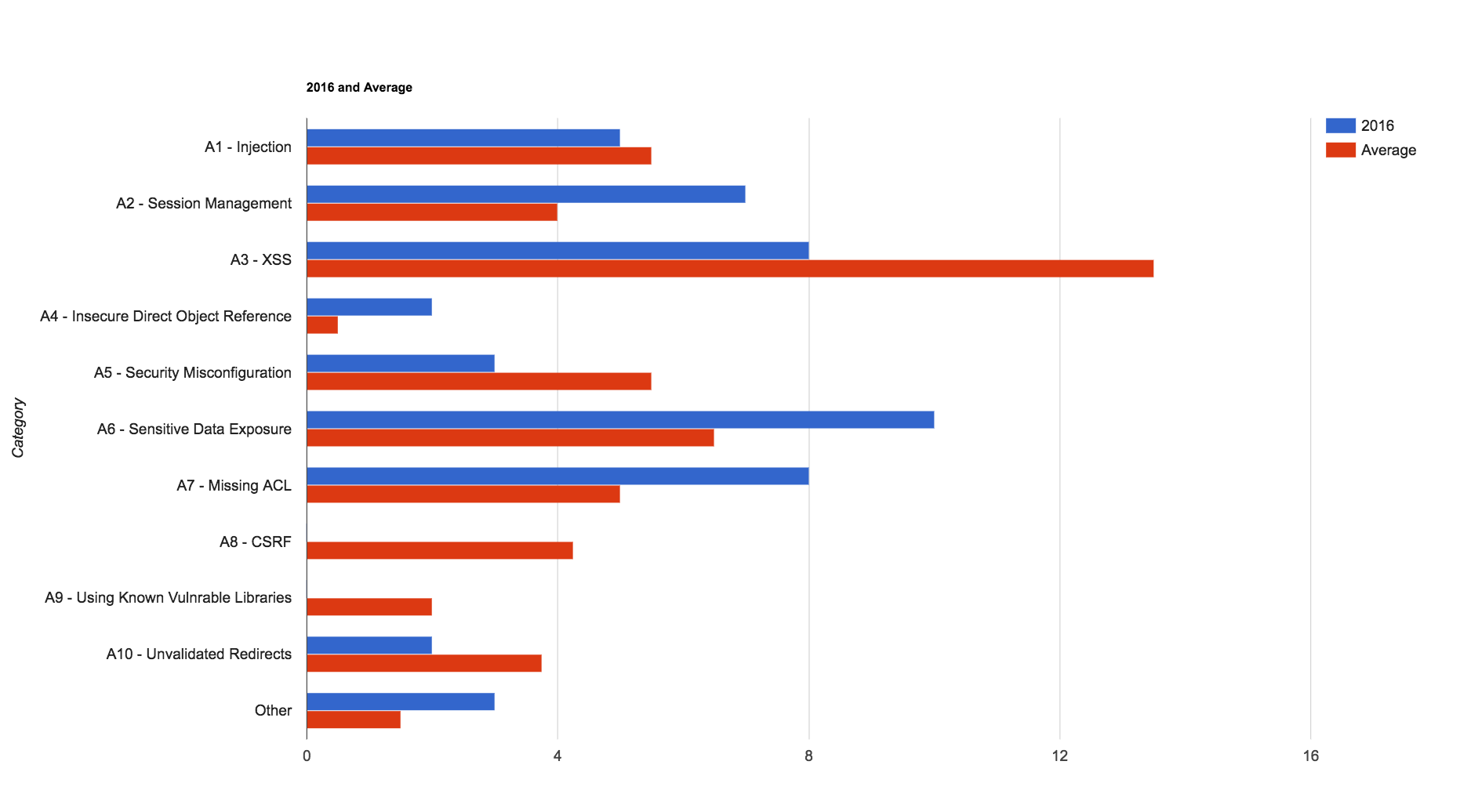 In April of 2016, we transitioned to the HackerOne platform. The graphs will not include all data for the year, unfortunately, but the data is still interesting. Notably, even though we had run a public bounty for almost 2.4 years, we still experienced a large spike upon announcing the transition, just like many programs’ initial public launch. 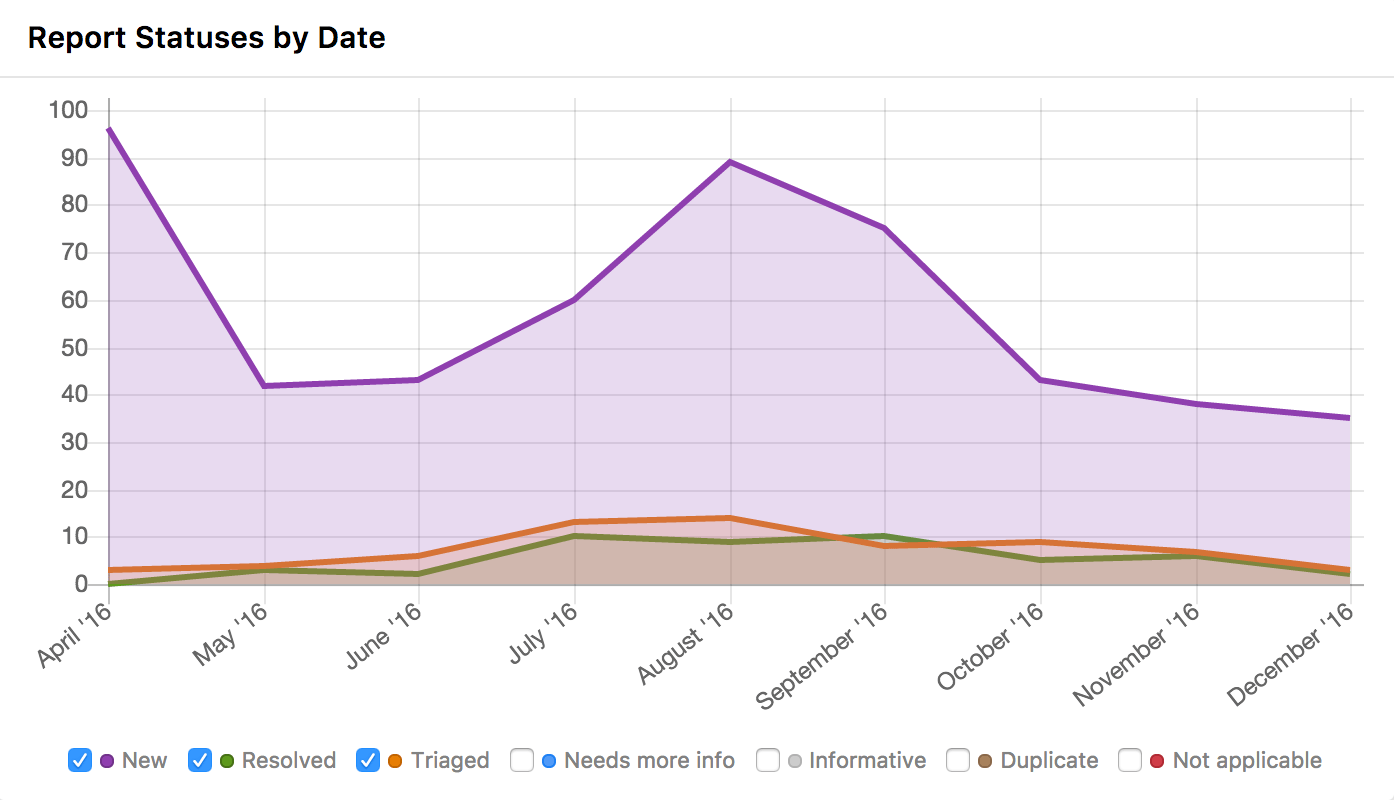 We’ve also been able to track new data via the platform. For example, our average response was about 16 hours and our time to resolution was about 28 days. Tracking this data and keeping it within acceptable bounds will help ensure our program continues to run smoothly and efficiently.

It’s more than just a bounty

We continue to see rewards being donated to charities. We absolutely love donating bounties, and we match all contributions. This year saw donations to Doctors without Borders and the Electronic Frontier Foundation (EFF).

We also sponsored an event that was aimed at helping people from under-represented backgrounds participate in bug bounties. The h1-415 event saw attendance from groups like Hack the Hood, Women in Security and Privacy (WISP), FemHacks, Lairon College Cyber Patriots, and /dev/color. Hack the Hood was nice enough to make a video from the event.

In 2016, we’ve learned a lot about running a bug bounty program and we’ve continued to uncover sharp edges of our services and codebase. Our program will continue to evolve to engage and support the community of bounty hunters that have made this program successful. We look forward to your submission in our fourth year of the program!