To highlight the people behind projects we admire, we bring you the GitHub Developer Profile blog series. Hiroshi “Nahi” Nakamura, currently a Site Reliability Engineer (SRE) and Software Engineer at… 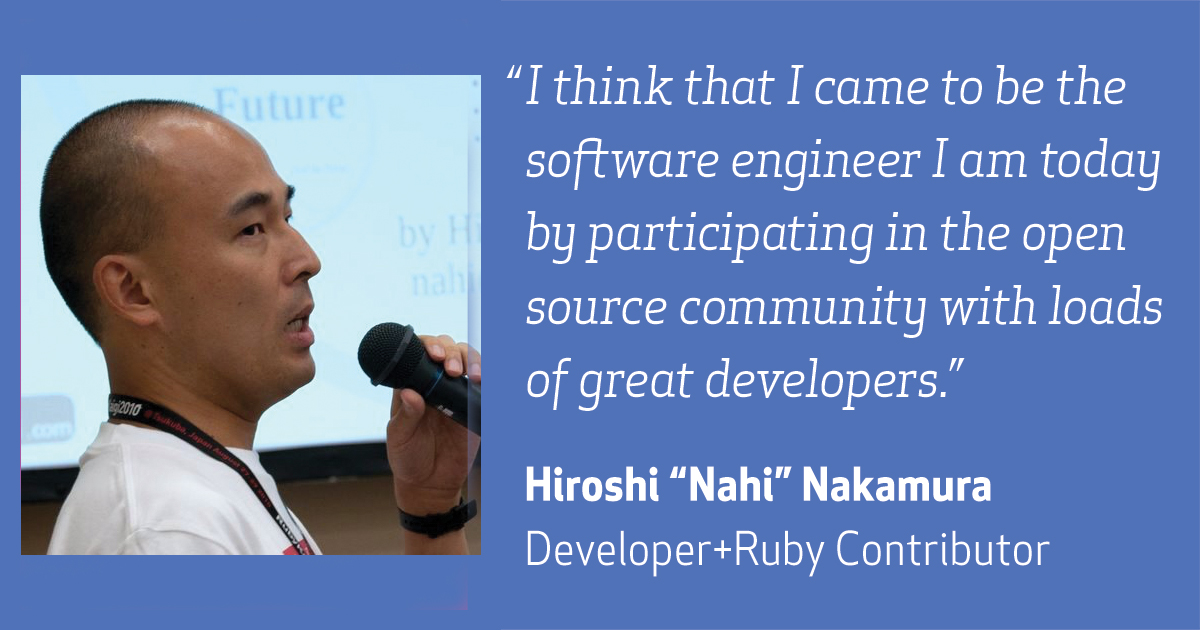 Hiroshi “Nahi” Nakamura, currently a Site Reliability Engineer (SRE) and Software Engineer at Treasure Data, is a familiar face in Ruby circles. Over the last 25 years, he has not only grown his own career but also supports developers all over the world as a Ruby code contributor. We spoke to Nahi about his work with Ruby and open source, as well as his inspiration for getting started as a developer.

Aki: Give me the brief overview—who is Nahi and what does he do?

Nahi: I have been an open source software (OSS) developer since I encountered Ruby in 1999, as well as a committer to CRuby and JRuby. Right now, I am an SRE and software engineer at Treasure Data.

Aki: How long have you been developing software?

Nahi: I started to write my first Basic program when I was about twelve. During college, I began work at a Japanese system development company, and for the past 25 years, I’ve worked in software development at various companies and projects.

Aki: Who did you look up to in your early days?

Nahi: The research lab that I was part of in college had wonderful mentors. In addition, Perl and Common Lisp (of course!) had open source code and taught me that I could freely enhance those programming languages by myself.

The first addition that I made was to Perl (version 4.018), and I believe it was an enhancement on string processing to make it faster. Each program that runs Perl benefited from the change, and though it was small, it gave me an incredible feeling of accomplishment.

Since then, I have had great respect for the creator of the Perl programming language, Larry Wall, whose work has provided me with opportunities like this.

Aki: Tell us about your journey into the world of software development (first computer, first project you contributed to, first program you wrote?)

Nahi: I discovered Ruby shortly after I started to work as a software engineer. Until then, I had written in languages like C, C++, and SQL for software for work, and in Perl for my own development support tools.

Without a strong understanding of object-oriented programming, I studied and picked up tools on my own and started contributing to projects. Back then the Ruby community was small, and even a neophyte like myself had many opportunities to interact with brilliant developers working on the project. Through Ruby, I learned many things about software development.

The first open source (we called it ‘free software’ back then) Ruby program I distributed was a logger library. To this day, whenever I type require ‘logger’ in Ruby, it reminds me of that embarrassing code I wrote long ago. The logger library distributed along with Ruby today no longer shows any vestiges of the previously-existing code—it has evolved magnificently, molded into shape on a variety of different platforms and for a variety of different use cases.

Aki: What resources did you have available when you first got into software development?

Nahi: I wrote SQL, Common Lisp, C—and everything on vi and Emacs. Perl was easy to modify and worked anywhere, so I really treasured it as a resource in my software developer’s toolbelt.

Aki: What advice would you give someone just getting into software development now?

Nahi: I think that I came to be the software engineer I am today by participating in the open source community with loads of great developers and engaging in friendly competition with them, as well as trying out the knowledge I learned from the community in my professional life. As opposed to when I first came across Ruby, there are several unique communities now and a great deal of opportunities to leverage them professionally. I really don’t have much advice to share, but I hope that everyone will seek the opportunity to get to know a lot of great engineers.

Aki: If you forgot everything you knew about software development, and were to start learning to code today, what programming language might you choose and why?

Nahi: I would choose either Ruby or Python. If I still knew what I know now, it would be Python. I would select a language in which the OS and network are hidden only behind a thin veil and easily identified.

Aki: On that note, you make a huge impact as part of Ruby’s core contributing team. How specifically did you get started doing that?

Nahi: After releasing my first open source software, I went on to release several Ruby libraries that I made for work, such as network proxy, csv, logger, soap, httpclient, and others. With Ruby 1.8, Matz (Yukihiro “Matz” Matsumoto, the chief designer of Ruby) put a policy in place to expand the Standard Library in order to spread Ruby. This allowed the user to do everything they needed to do without additional libraries by simply installing it. A number of the libraries that I had made were chosen as candidates at the time, and I have mainly maintained the Standard Library ever since. The announced policy to expand the Standard Library was a great coincidence for me, since it allowed me to build experience.

Aki: For new contributors to Ruby, what do you think is the most surprising thing about the process?

Nahi: To be honest, I haven’t been able to contribute to Ruby itself over the past few years, so I am not aware of the details on the specific development process. However, I think the most surprising part is that it clearly does not look like there is a process.

In reality, a group of core contributors discuss and make decisions on the direction of development and releases, so to contribute to Ruby itself, you must ultimately propose an idea or make a request to those core contributors.

That’s the same with any community, though. One defining characteristic of the process might be that the proposals can be fairly relaxed, as there is no culture of creating formal documents.

Aki: Okay, we have to ask. What is the most interesting pull request you’ve received for Ruby?

Nahi: While not necessarily a “pull request,” I have received all sorts of suggestions that stand out: replacing the Ruby execution engine, swapping out the regular expression library, gemifying the Standard Library, etc. As for the most memorable pull request I have received personally, one was a request to swap out the CSV library I made for a different high-speed library. When I think about it with a clear mind, it was a legitimate request, but it took forever to make the right decision.

Aki: Outside of your open source work, you also work full time as a developer. Does your participation in open source inform choices you make at work? How?

Nahi: Active involvement in open source is one of the pillars of business at the company I currently work for, and it informs the choices the other engineers and I make unconsciously. When developing something new for the business, we never begin work on a project without examining existing open source software and the open source community. As much as possible, we try not to make anything that replicates what something else does. However, if we believe it necessary, even if existing software does the same thing, we make products the way they should be made. Then, we compete with that and contribute our version back to the world as open source. The experiences and knowledge that we pick up, and also give back through the process, is the lifeblood of software development.

Until I came to my current company a year and a half ago, I led dozens of system development projects, mainly as a technical architect in the enterprise IT world for about 15 years. Back then, I participated in open source individually rather than at my company.

Aki: Tell us about your view on where the enterprise IT world is lagging behind. How do you see the open source developer community making a contribution to change that?

Nahi: In the enterprise IT world, we were trying to create a future that was predictable in order to control the complexity of business and the possibility of change. Now, however, it is hard to predict what things will be like one or two years down the road. The influence of this unpredictability is growing so significant that it cannot be ignored. Luckily, I was given the opportunity to lead a variety of projects, and what helped me out then was the experiences and knowledge I had picked up by being involved in the open source community.