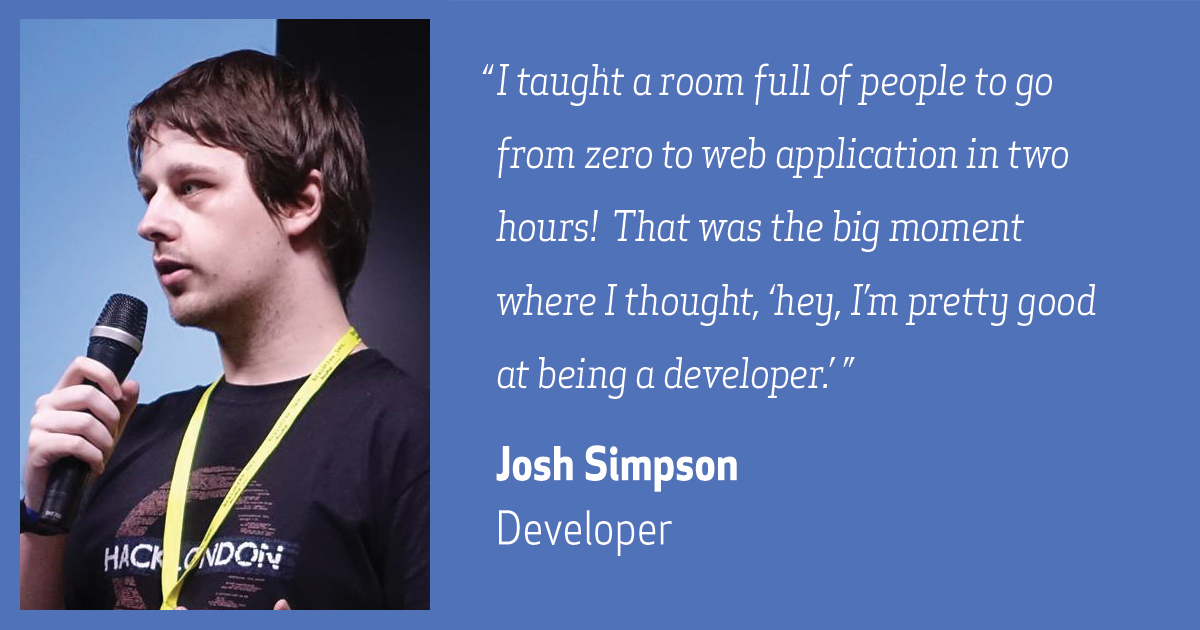 Josh Simpson, who is currently pursuing his computer science degree at King’s College in London, proves you don’t need decades of programming experience to make an impact. When he’s not hacking away at school, Josh dedicates his time to helping others learn to code — mainly through his involvement in the KCL Tech Society and as a student advocate at HackCampus, which connects students to internship opportunities at startups in the UK. We talked to Josh about these two initiatives and learned more about his other passion: hackathons, and how they bring the tech community together.

Erin: Give us the basics. Who is Josh Simpson and what does he do?

Josh: At the moment I’m a 4th-year computer science student in London. For the past year and a half, I’ve been doing a lot of work with the hackathon community here. I also work with Hack Campus, which helps connect developers with companies and provides a better intern experience.

Erin: How long have you been developing software?

Josh: I’d love to say it has been for the entire time I’ve been doing my degree, but that’s not really true. I’ve really been investing in learning to code for about the past two years.

Erin: There are so many new avenues for learning to code, do you have thoughts about the advantages of going through a traditional program?

Josh: The biggest advantage at the moment is that I have four years of working within safety nets. As a student, you have so much to protect you from what could go wrong in the real world. If something did go horrifically wrong, I’ve got a backup system somewhere. Someone has the job to help me and make sure I don’t fail massively, which is a huge advantage to going the traditional route. But it’s definitely no longer mandatory. You don’t have to get a computer science degree to go into programming. I think it’s fantastic, the amount of people who are self-taught who’ve come out just as good if not so much better than a lot of the programmers who learn at university. It’s inspiring. People who have just sat there at home and thought, ‘I’m going to do this’, while working part-time or full-time jobs. They come home and spend a few hours in the evening every day for a few weeks, and they’ve actually picked up something which I’ve studied for four years to get the same level. So yeah, it’s impressive.

Erin: Were there people who you looked up to when you were getting into programming?

Josh: Yeah, definitely. There are some really fantastic people around the hackathon community. They are so focused on just teaching others. I really admire Joe Nash, who is the developer evangelist for Improbable. When I met him, he was doing a lot of work with MLH, and he brought me along to my first hackathon. It was through him that I actually started getting involved in the hackathon community. He helps me out with job interviews and tells me how I can better myself. He’s one of those people who will tell you what you’re doing is wrong, incessantly, but you argue with him for five minutes and then you go, “you’re right, you’re actually completely right about this.” Which is, I think, an incredible ability.

Erin: What sparked in your mind that development was something you wanted to do.

Josh: Four years ago I enrolled myself in a computer science course thinking that it was a lot lighter — I had no idea it was programming, essentially. I stuck with it for a couple of years, but I was doing my degree for the sake of doing my degree — I wasn’t doing anything on the side, I wasn’t helping myself. At the beginning of my third year, I realized I needed to find other like-minded people and engage with them. I found the KCL Tech Society and joined up with them, started going to workshops, figuring out how people teach, figuring out how they host all of these fantastic community events. Over the year, I got more and more involved, to the point where suddenly I was running workshops on Ruby on Rails. I taught a room full of people to go from zero to web application in two hours! That was the big moment where I thought, ‘hey, I’m pretty good at being a developer.’

I started building school projects and putting together hackathons. I built Dot to Dot with a friend at Hack the Planet. It teaches people how to use APIs and how to build their own. That involved 54 hours of no sleep before we actually started the hack, so the naming was a little bit off. It was a nice feeling that everyone seemed to actually enjoy using it.

Erin: Why should more people get involved with hackathons?

Josh: There’s a massive culture around learning, building, and sharing. People who have never coded before in their life can go to a hackathon and learn how to build a web application in 24 hours. And on the flip side of that, you have a community that is so invested in taking the time to teach other people — it’s 24 hours in a room filled with people who share the same interest of building stuff and teaching each other. There are very few places in the world and very few fields where you can find that same thing.

Erin People say ‘get involved with the community’ but it can be really hard to put yourself out there, especially if you’re shy or don’t have a lot of confidence in your code. Any advice for getting past that?

Josh: It’s…really difficult. One of the pieces of advice we give people who don’t have a lot of confidence in their code is to point to other people in the room, including myself — and this is the nice thing about hackathons — where we can say that we have no specific expertise, no singular experience that makes us better than anybody. We have an interesting idea, and one of us managed to draw together enough code to make it work, and this is the same stuff we do in our workshops. It’s the same as if you went through code academy — it’s just framed differently. It’s difficult to get involved until you realize that you’re just as good as everyone else was at some point. Some people have just had the experience to go ‘oh, I actually know how to apply this in this one specific way’.

Erin: And one might say that you could get that experience to apply your ideas by going to hackathons?

Josh: Yeah, haha, I would encourage people to just find a meetup locally. Find a bunch of people who are interested in something similar; it’s really helpful and they’ll teach you a bunch of stuff that you didn’t know beforehand, which lets you come back and say ‘I know this little bit’, and the cycle continues from there. A new person will come to the meetup and it’s your turn to say, ‘hey, did you know this beforehand?’

Erin: I’d love to talk about Hack Campus — What’s so cool about it?

Josh: We approach startups and advocate for students by encouraging them to hire interns. The startups pay a student’s wages for ten weeks – it’s £350 which is pretty good – and we sort out their accommodations right in the heart of London. So it takes away the issue of having to find and pay for a place to stay, removing a lot of stress out of that situation. And because you’re working at a startup that can’t just throw money away on them, interns are working on production code or getting their hands on something important fairly quickly.

Erin Can you tell me about some of the results of the program?

Josh: Sure. It’s growing very slowly — last summer was actually the first time we’ve run the program. We have a bunch of testimonials from the people who were involved last year. They mainly said it was a badass experience. We had people who said it was so valuable they would have done it for free — that they were pushing code by day 20. And that’s really cool, that students — students — are saying, yeah, I would’ve done that for free. We need to get better and more diverse backing to scale the program. The way it’s run now is as a single arm of Index Ventures, but the idea would be to scale that up so we can go to more places, and new startups, and bring in more students. This model doesn’t seem to exist in America, but I’d love to see something like this take hold there in the future.