Meet Sara Chipps, founder of Jewelbots and Girl Develop It!

To highlight the people behind projects we admire, we bring you the GitHub Developer Profile blog series. Given Sara Chipps’ experiences developing software over the past 15 years, it’s easy… 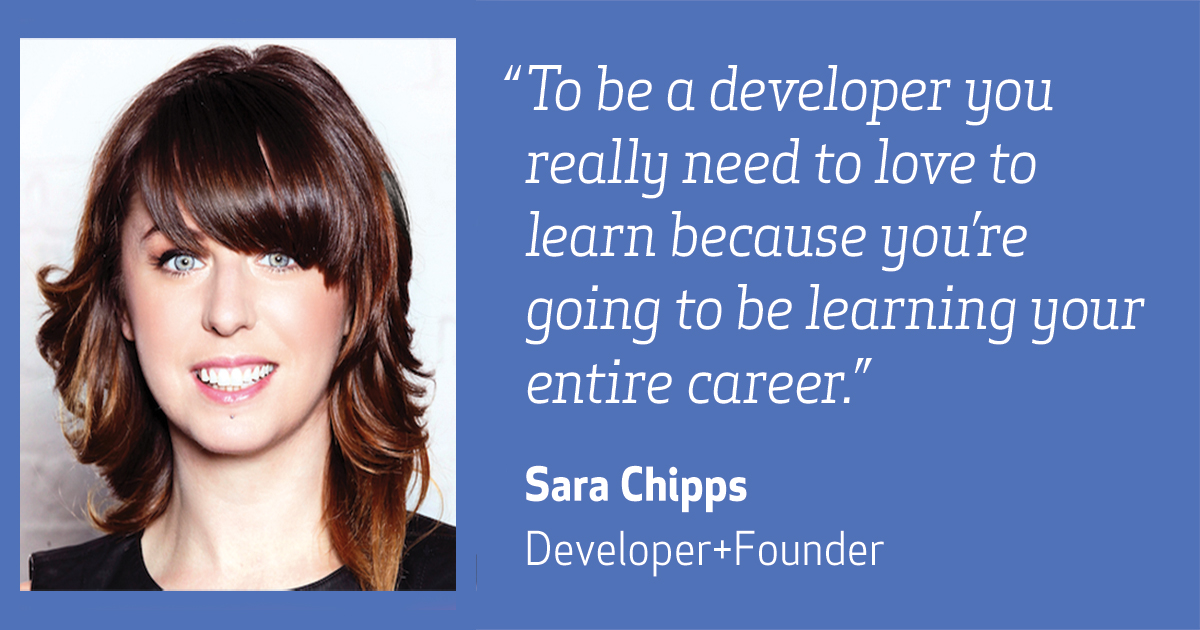 Given Sara Chipps’ experiences developing software over the past 15 years, it’s easy to understand why she’s so focused on helping people from underrepresented communities get involved in programming. From Girl Develop It! to Flatiron School to Jewelbots, Sara is all about meeting people where they are, and helping them find a path into engineering. We caught up with her to find out what she’s working on, and how it just might change the conversation around diversity in tech.

Erin: Okay, let’s cover the basics. How long have you been developing software and what programming languages do you use?

Sara: I’ve been developing software for the past 15 years, and have mostly focused on data and backend technologies. For the past four years, I’ve gotten more involved in hardware development. I’ve used C, C#, JavaScript, Ruby on Rails, some Python.

Erin: Who did you look up to in your early days?

Sara: When I was getting started, I didn’t work with another woman until five years into my career. Even then, it was one woman, and I didn’t work with another one for a really long time. My first mentors were men who were really invested in seeing more women in technology. People like Scott Hanselman, Rob Conery, Miguel DeIcaza, and John Galloway, who have all worked at Microsoft at some point. They were experienced developers who cared about the world of open source. Some time later I found out who Marissa Mayer was It was really exciting that she was an experienced and accomplished developer who also cared about fashion and other things I liked. She’s always been someone I tried to emulate.

Erin: Let’s go back a little further. Tell us about your journey into the world of software development.

Sara: My first computer was a Cention 386. I don’t even think it had Windows. I started coding to become part of the world of Bulletin Board Services (BBS), which were around before the Internet. There were also very limited resources available. There were books, Slashdot and Microsoft’s online resources and developer community. That was pretty much it. It wasn’t until several years into my career that I contributed to my first open source project. My mentors were working on a Twitter client written in Silverlight and I was so excited to get involved that I asked them for something small to work on. During that time I was doing contract work for Microsoft, British Telecom, Johnson and Johnson, and others. Contracting allowed me to spend the rest of my time working on Girl Develop It!

Erin: What advice you would give someone just getting into software development now?

Sara: Everyone learns differently and there are so many different learning styles. The good thing about having so many resources available is that you can find something that is adapted to your particular learning style. For example, some people learn through reading so online tutorials are great. Sometimes people learn by watching, so services where you can have developers on the other side of the screen working with you and coaching you are great. If you figure out what kind of learner you are, you can narrow down what resources will work for you.

Erin: Girl Develop It! Is a non-profit that provides affordable and judgement-free opportunities for women to get involved with software development. Can you share a little background on how it came about?

Sara: One day my friend and I were talking about how uncomfortable we often felt asking questions in our computer science classes. It sucked being the only women on those teams. We realized that a lot of women didn’t have a safe place to learn and ask questions. We really wanted to change that. We made Girl Develop it! as a place where people could go ask “stupid” questions.

Erin: Much of the tech world is still asking questions about how to get young women and girls interested in learning to code, but you’ve been providing answers — With Girl Develop It!, as CTO of Flatiron School, and with Jewelbots. Are there areas where you’d like to see the conversation around women in tech evolve?

Sara: We need to see more diverse people in leadership. It’s not just about hiring more junior developers who are going to burn out. It’s promoting women who can hire other women. I’ve run two development teams of 10+ people and most of them were women. The reason for that is because I’m a woman and I know lots of women; you find people you know. People say they can’t find female developers, but I can. The only way to affect change is to promote women. It’s hard to find women with seniority. I’ve watched many of my peers drop out. They say that women are promoted on experience and men are promoted on potential. I say, find women with potential and give them the experience.

Erin: You’ve spent a lot of time with parents while building Jewelbots. What advice would you give parents who aren’t experienced with science or technology, but want to support their kids’ interest in programming or engineering?

Sara: Part of why we created Jewelbots is to help normalize programming. It’s not about finding the maker kids and giving them a new way to work, it’s about introducing all kids to programming. Right now there’s a class system that prevents kids from underrepresented backgrounds getting into technology. There are expensive private schools with STEM curriculum, but some public schools don’t even have teachers qualified to teach it.

Also, I’d tell parents to let their kids play more video games. Minecraft is a huge entrance into programming. Minecraft, Code.org, FIRST robotics — these are the most amazing things in the world.

Erin: Are there any misconceptions out there about software developers that you think need to be retired? Why do they no longer apply?

Sara: Can we stop talking about the whole nerdy thing? As soon as building software became a lucrative job all kinds of people started going for it. It definitely used to attract one kind of person, but now it’s more mainstream. Developers aren’t nerds. They have all kinds of interests and backgrounds. When we reinforce that stereotype it just alienates people that don’t see themselves fitting into that group.

Erin: You interact with software developers of all ages, from all different backgrounds. What are some of the characteristics you see that are common amongst the developers who you find inspiring?

Sara: To be a developer you really need to love to learn because you’re going to be learning your entire career. None of us are doing any of the things we learned in school on a regular basis. It becomes irrelevant so quickly. Of course, that doesn’t suit some people and they burn out. They can’t deal with learning one more new programming language.

This hunger to learn is something I see with developers of all different backgrounds and ages. When we were doing Girl Develop It! There were women in my classes who were in their sixties and they would make study groups because they were so excited to be learning and to be a part of something.

Erin: Anything else you’d like to share?
Sara: I’ve really been loving Reshma Saujani’s Ted Talk lately. It’s all about teaching women to be brave.

Get more details on Girl Develop It! or Jewelbots.