One of GitHub's niche features is the ability to access a Git repository on GitHub using Subversion clients. Last year we re-architected a large portion of the Subversion bridge to work with our changing infrastructure.

One of GitHub’s niche features is the ability to access a Git repository on GitHub using Subversion clients. Last year we re-architected a large portion of the Subversion bridge to work with our changing infrastructure.

A key part of the Subversion bridge is a mapping between Git commits and Subversion revision numbers. The mapping is persisted so that we can produce a consistent view of the repository. A bit of the mapping is exposed via a custom SVN property, git-commit. For example, you can see that revision 2504 of phantomjs is an SVN representation of Git commit 2837f28.

During the initial development of the Subversion bridge, we chose to store the mapping data in the repository directory as a serialized Ruby data structure. This worked well as it co-located the mapping information with the target of the mapping.

Storing the mapping this way has some disadvantages. The mapping file required special treatment in the tools that manage our infrastructure. For example, backup scripts couldn’t simply git clone a repository. As our infrastructure was evolving, these types of special cases made it impractical to store ad-hoc files in Git repositories.

So, in 2015, we undertook an effort to move the Subversion mapping into the Git repository’s object database. This keeps the mapping data co-located with the repository and it also means that there are different special cases related to handling the mapping data. The result of this effort is that the mapping data is now just an ordinary Git commit:

In addition to moving the mapping data to Git our goals were to maintain feature parity and to not negatively impact performance for our end users.

In order to provide a seamless rollover from the old mapping to the new mapping we used our Scientist library to run both mappings in parallel.

The Scientist library helps you take two or more implementations, run the same inputs through them, and then compare the output of each in production. This helps build confidence that the new implementation is equivalent to the old. Testing accomplishes some of this. But in complex systems, real use provides a scope of testing that is simply not possible in a reasonable amount of engineering time.

The first step of this project was to extract a MsgpackMapping class. The new class encapsulated all of the storage needs of the SVN bridge. It was an interface that we could re-implement in terms of the new Git-backed mapping.

Next we created a new GitMapping class with the empty methods that matched the methods in MsgpackMapping.

Then we created the ScientificMapping class that uses Scientist to run the experiments. This class let us enable and disable experiments for each method as we implemented it.

Finally we created a class to represent experiments. This class controls how often experiments are run. It records the results of the experiments.

One thing to note in the code above is how we stored results. We counted results with Statsd. We stored details about experiments in log files at first, and later switched to storing them in our exception reporting system. None of these were new to the Subversion bridge. They’ve all been in use for a long time, and we have good tooling for querying them. This highlights one of the boons of using Scientist: it makes no assumptions about how you want to store your results. For example, other apps at GitHub use Redis and/or MySQL to store Scientist’s results.

With Scientist configured and our new mapping classes in place we started the process of implementing each mapping method.

Our process for implementing the GitMapping class did not change much over the course of the project. However, we frequently made small changes that shortened the feedback loop for each step. The core of our process looked something like this:

We relied heavily on graphs, logs, and scripts for identifying mismatches, measuring performance, and tightening our feedback loop.

At the beginning we had a dashboard that summarized experiment mismatches, performance, and response times to ensure our experiments weren’t negatively impacting customers. 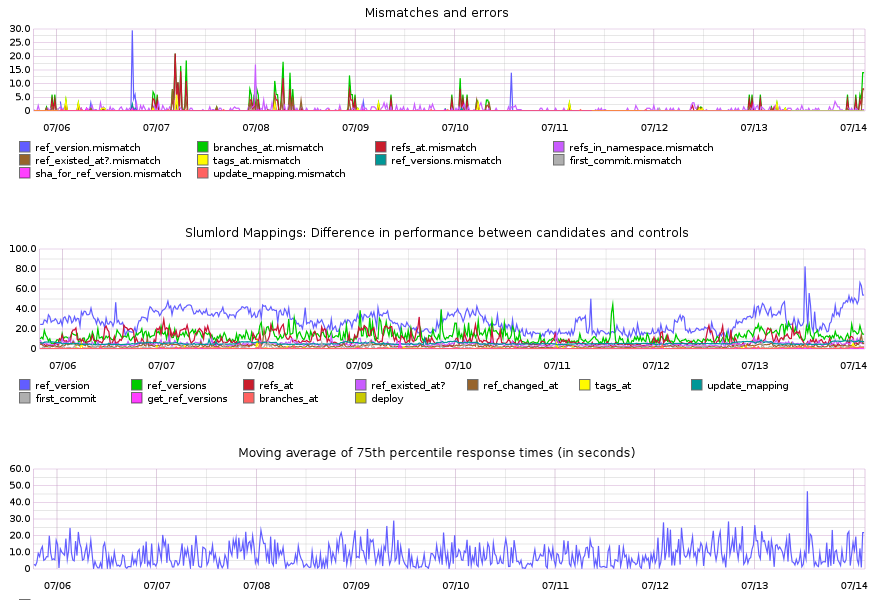 With a general sense of how things were going, we dug into specific mismatches with our raw log and error reporting systems.

This is an expanded view of a mismatch in our error reporting system. 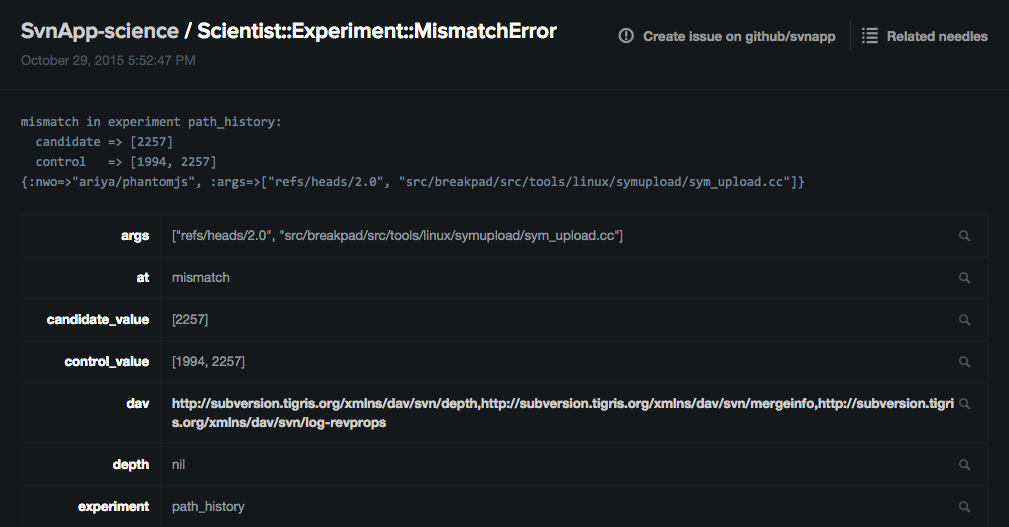 Further into the project as mismatches became less of an issue and maintaining performance became more of a concern we added a new dashboard that split out each method into its own graph and gave us a quick visual of how the candidate was performing against the control. The new graphs enabled us to track down some significant performance regressions.

We used a handful of caching strategies to fix performance regressions in addition to implementation changes.

The process for replicating issues in development quickly became a bottleneck. Each repository is a special snowflake, made up of a set of commits from a variety of committers with a variety of native languages and a variety of Git versions. Each repository has a mapping file that was built up by many versions of the Subversion bridge. It was hard to reproduce bugs in development with contrived repositories. So we added script/clone. This script cloned open source repositories and pulled a copy of the msgpack mapping file. This allowed us to reproduce, test, and debug problems locally.

The next script we wrote opened a console for our app with instances of the MsgpackMapping, GitMapping, and ScientificMapping classes already initialized. It’s not like doing this manually took a long time. But we were doing it so often that scripting it saved time in the long run. It also made construction of the objects more consistent.

As performance tuning became more of a concern we added script/benchmark to help us quickly iterate on a single repository in development without having to deploy and then wait for performance data to be collected in production.

In the end we were able to swap out the msgpack based mapping for the new Git-backed mapping in production for thousands of customers. Our Git infrastructure team was able to continue making improvements without the Subversion mapping file in the way.

To learn more about how we use Scientist read Scientist: Measure Twice, Cut Over Once by @jesseplusplus and Move Fast and Fix Things by @vmg.