From sticker to sculpture: the making of the Octocat figurine

Last month, we released the Octocat figurine, finally taking our mascot into the third dimension. For years, we’ve illustrated her in different themes—from human culture to pop culture—so a figurine…

Last month, we released the Octocat figurine, finally taking our mascot into the third dimension. For years, we’ve illustrated her in different themes—from human culture to pop culture—so a figurine seemed like the next logical step.

We all wanted Octocats on our desks, but we were new to the vinyl figurine world. Here’s a look into the journey we took to make this idea a reality. 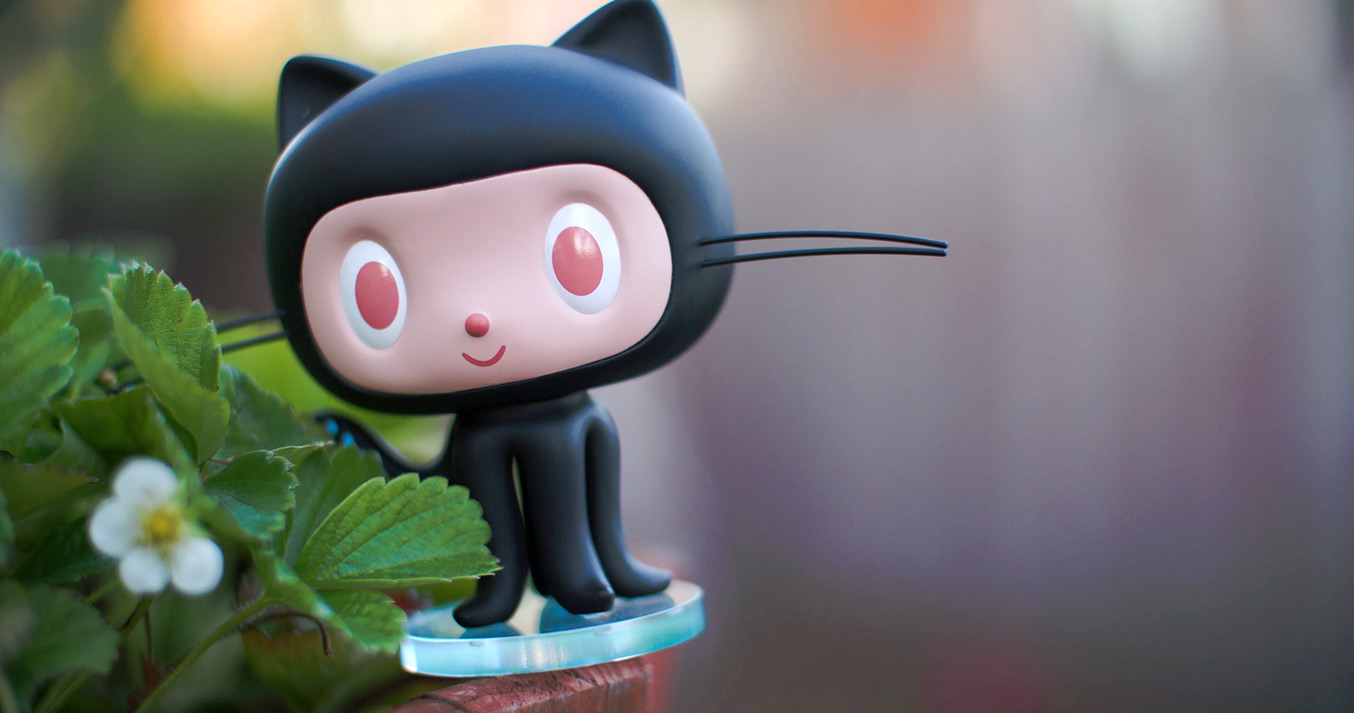 We began with her profile. The Octocat is the sum of two merged animals, but where does one animal begin and the other end? Her tentacles clearly originate from an octopus, but we had to decide which animal traits would define her head shape. She also needed some human characteristics to help round out the feline and cephalopod.

Anthropomorphizing animals is nothing new to character design. It helps us relate to a character through traits we find in our own species. Eyes are common elements to anthropomorphize because of their importance for visual communication. They help to emote and give personality, which is why we felt they would be important to emphasize, considering the size of her eyes in relation to her head.

To make the Octocat relatable, we extended her nose and mouth off her face giving the slight impression of a snout. Her ears and whiskers are important elements of her silhouette so we didn’t alter them. We choose to stretch the Octopus epidermis from her tentacles to her head giving her that smooth texture commonly found in sea creatures. This helps to reduce surface friction while swimming and helps to alleviate the unseemly byproduct of cat fur: hair balls. Here is one of our early concepts: 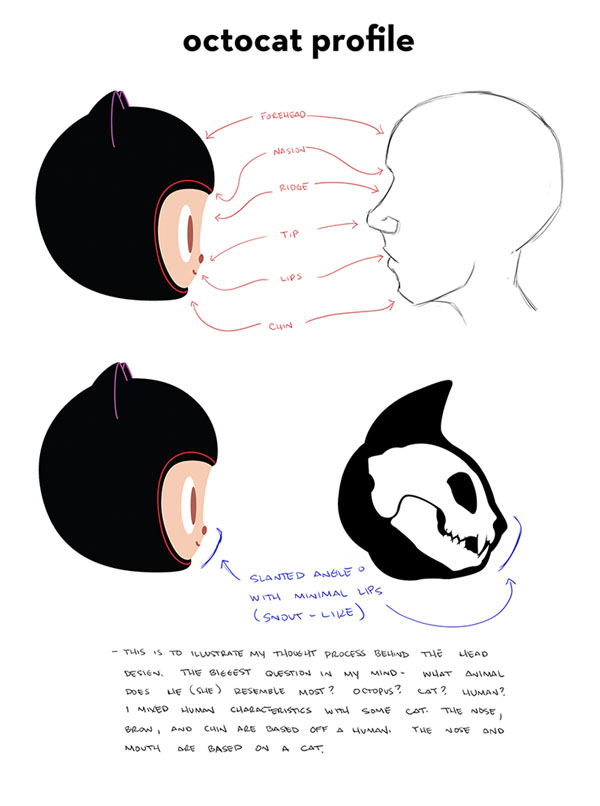 Our next challenge was the tentacle count. Does she have eight tentacles or four legs and a tail? This particular dilemma has long been a point of contention and debate among GitHubbers. In the two dimensional world it was easy to leave this question ambiguously unanswered, but in three dimensions we were finally forced to choose.

Part of the beauty of the Octocat is her paradoxical nature, being a mixture of creatures stuck between worlds. She has been represented as a quadruped, a biped, and a pentaped, but never an octoped. While we absolutely respect the opinion of our eight tentacles favoring friends, with eight she would feel inauthentic, so we chose to stick with five.

With the tentacle count question settled, we focused next on her stance. With any mascot, recognition is paramount. Our goal was to design the figurine so the front view would look as close to the original image as possible. The Octocat is both a land and sea creature. She is quick and limber. Gravity and balance are less challenging under water but when she moves onto dry land these elements prove to be much more difficult. You’ll notice her original stance does not take this into consideration. If we were to keep the exact same tentacle pose from the front but in a position that would support her giant head, it would have to be one of these two choices: 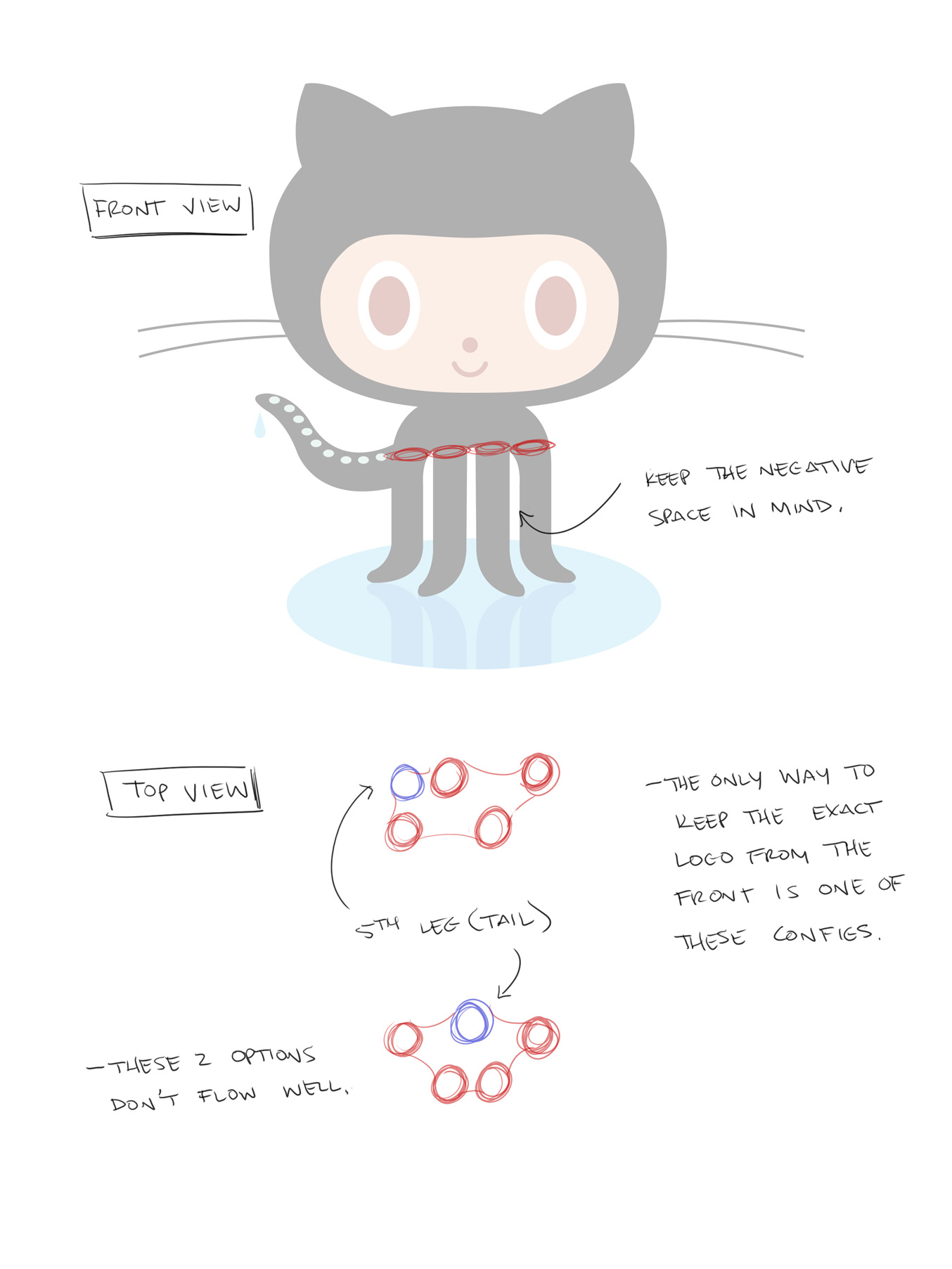 We were not happy of these two options considering how unnatural they felt, so we decided to make a compromise. In the interest of creating a cartoony yet believable organic creature we had to do some repositioning. The end result was a pentagon configuration which would serve as the base of her tentacles. This meant the elasticity of the tentacles would absorb the weight of her large head, giving them a more round organic shape. 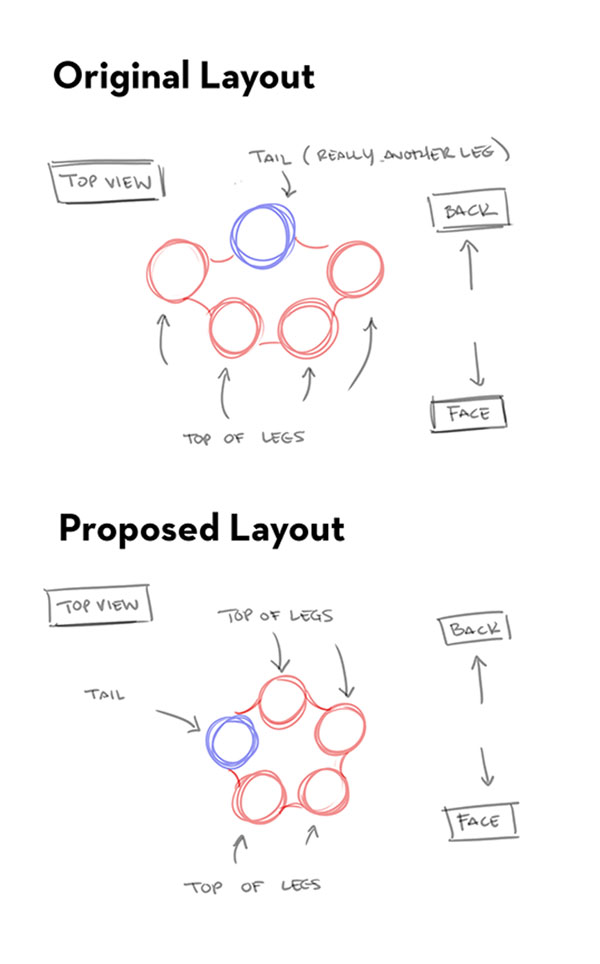 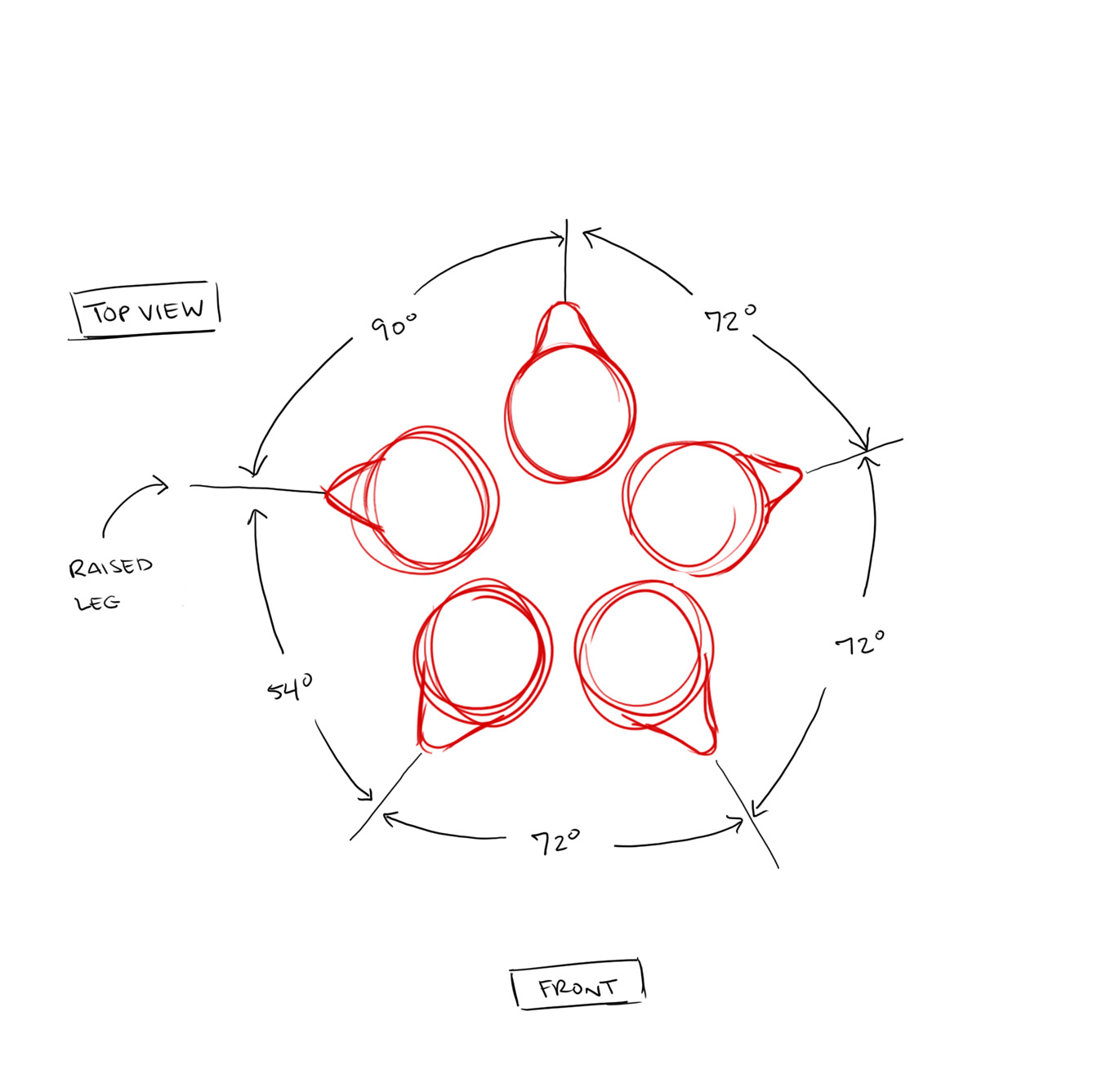 With our design in place, we received our first samples. From here, it took a series of small adjustments to get us to production. 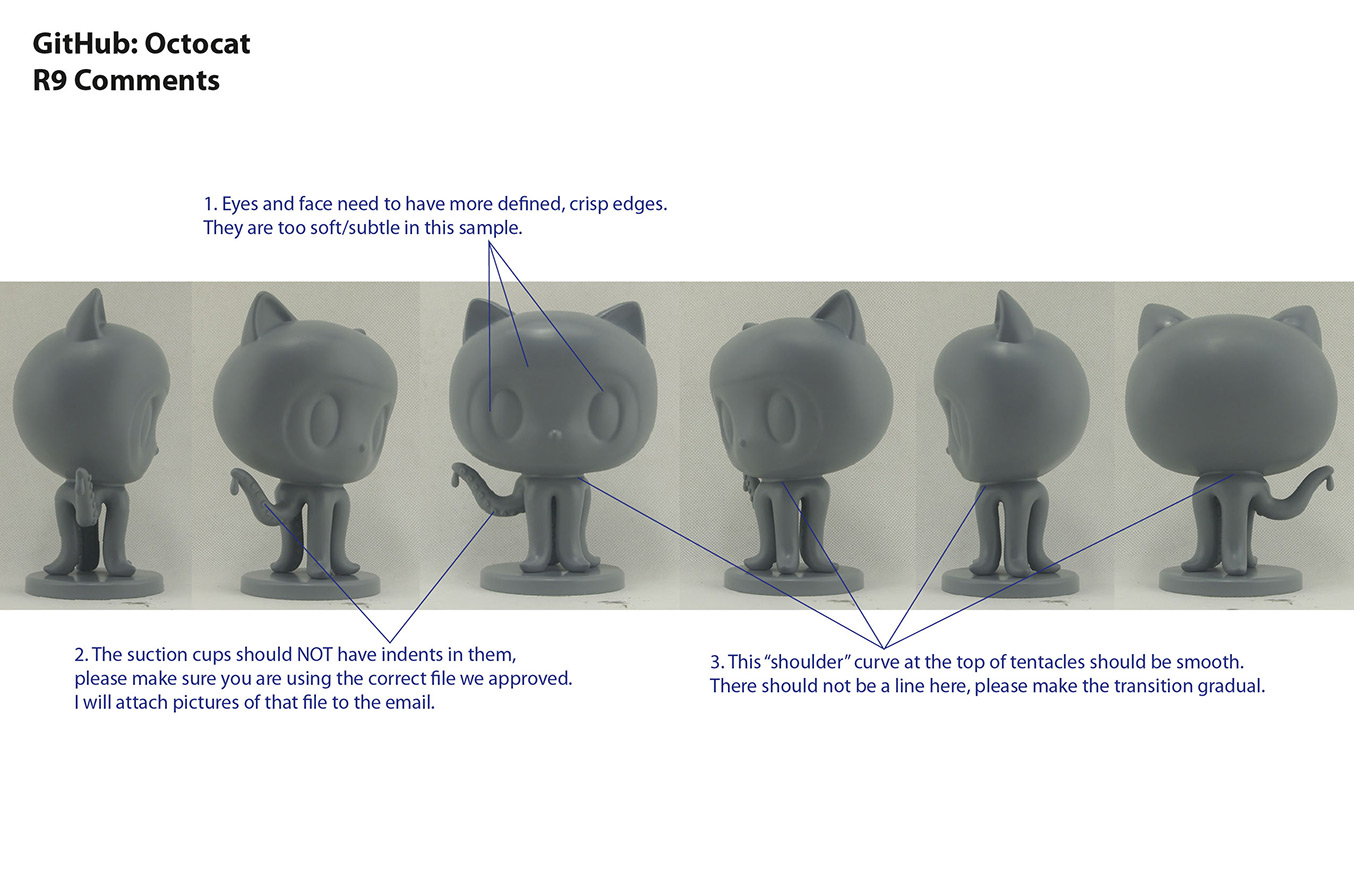 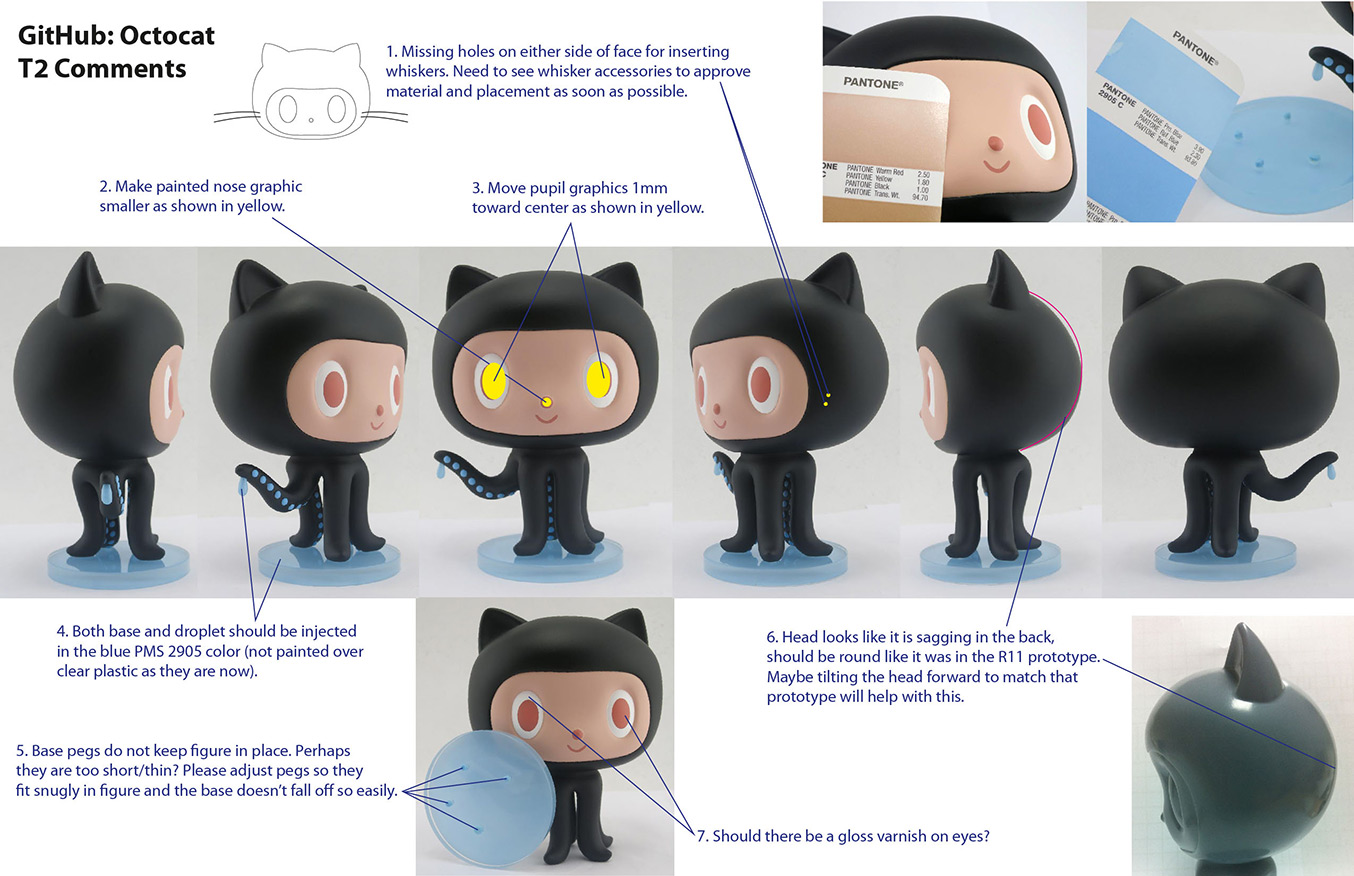 Packaging was just as important to us as the figurine itself; we wanted the box to be emblematic of its precious cargo. We tried our a wide variety of concepts from shipping containers to Octocat head shaped boxes: 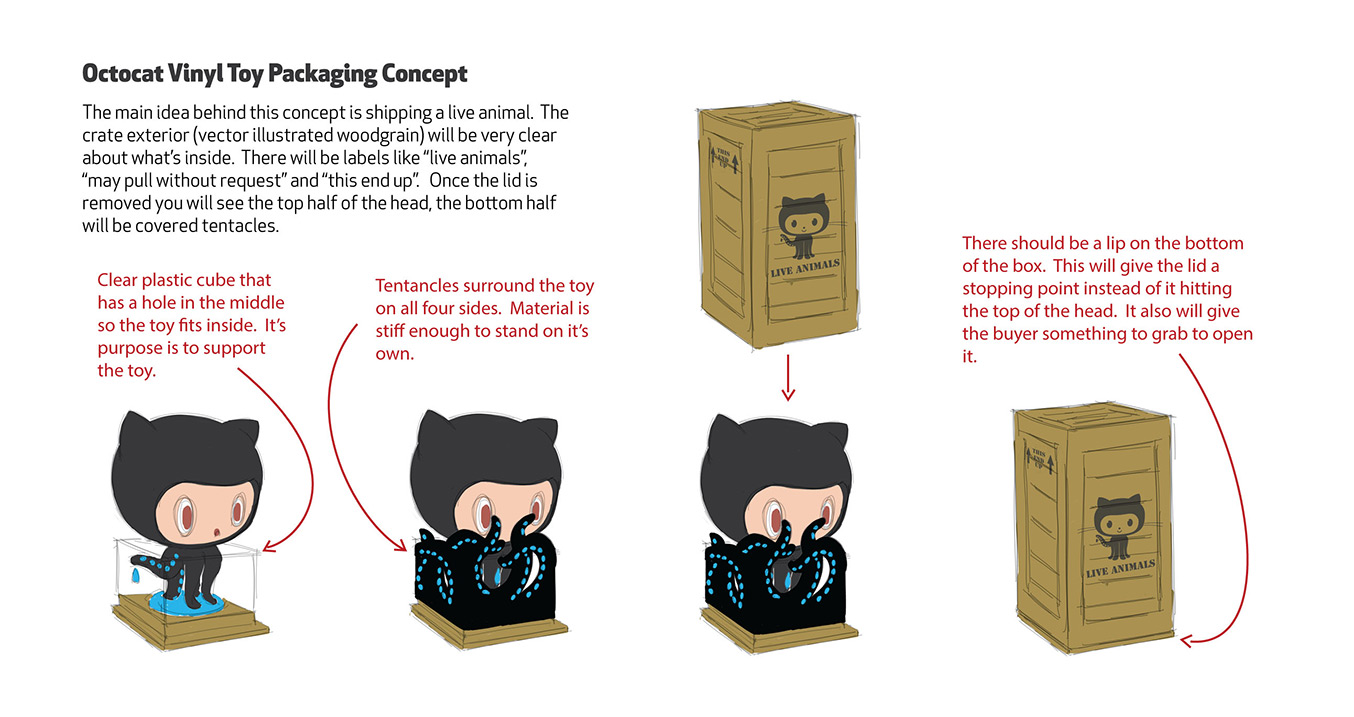 In the end, we found that simplicity was the best option: 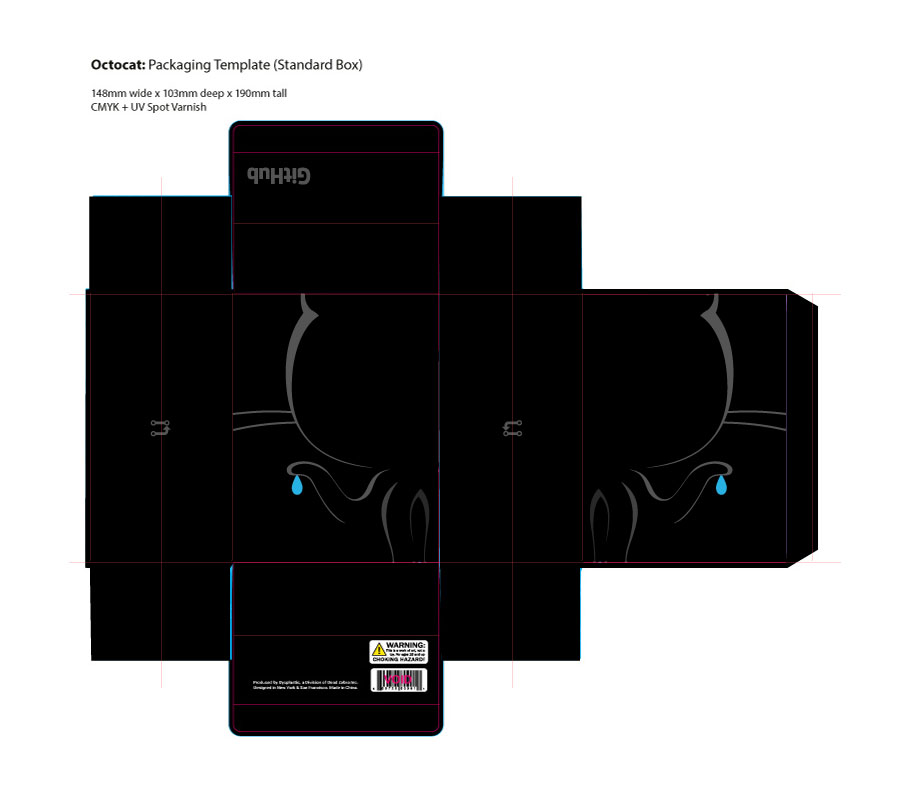 The final product is an Octocat figurine we’re really excited about. Huge thanks to all the amazing people at Dead Zebra who helped us along the way. 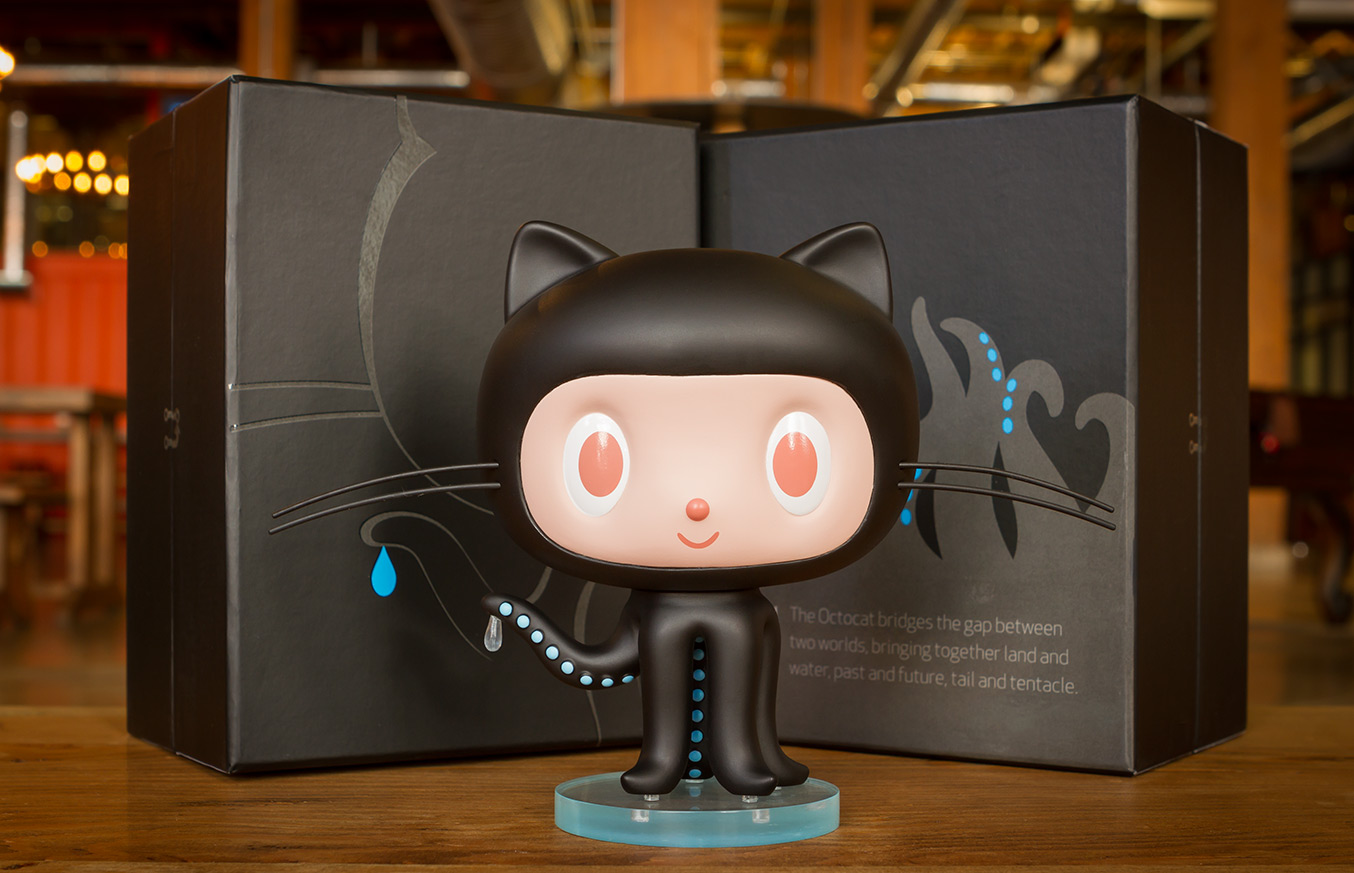 We hope you enjoy her as much as we do.