Last week on Wednesday, January 8th, GitHub experienced an outage of our DNS infrastructure. As a result of this outage, our customers experienced 42 minutes of downtime of services along…

Last week on Wednesday, January 8th, GitHub experienced an outage of our DNS infrastructure. As a result of this outage, our customers experienced 42 minutes of downtime of services along with an additional 1 hour and 35 minutes of downtime within a subset of repositories as we worked to restore full service. I would like apologize to our customers for the impact to your daily operations as a result of this outage. Unplanned downtime of any length is unacceptable to us. In this case we fell short of both our customers’ expectations and our own. For that, I am truly sorry.

I would like to take a moment and explain what caused the outage, what happened during the outage, and what we are doing to help prevent events like this in the future.

For some time we’ve been working to identify places in our infrastructure that are vulnerable to Distributed Denial of Service (DDoS) attacks. One of the things we specifically investigated was options for improving our defenses against DNS amplification attacks, which have become very common across the internet. In order to simplify our access control rules, we decided to reduce the number of hosts which are allowed to make DNS requests and receive DNS replies to a very small number of name servers. This change allows us to explicitly reject DNS traffic that we receive for any address that isn’t explicitly whitelisted, reducing our potential attack surface area.

In order to roll out these changes, we had prepared changes to our firewall and router configuration to update the IP addresses our name servers used to send queries and receive responses. In addition, we prepared similar changes to our DNS server configuration to allow them to use these new IP addresses. The plan was to roll out this set of changes for one of our name servers, validate the new configuration worked as expected, and proceed to make the same change to the second server.

Our rollout began on the afternoon of the 8th at 13:20 PM PST. Changes were deployed to the first DNS server, and an initial verification led us to believe the changes had been rolled out successfully. We proceeded to deploy to the second name server at 13:29 PM PST, and again performed the same verification. However, problems began manifesting nearly immediately.

Our caching and authoritative name servers were reloaded at 13:49 PST, resolving DNS query timeouts. However, we observed that certain queries were now incorrectly returning NXDOMAIN. Further investigation found that our DNS zone files had become corrupted due to a circular dependency between our internal provisioning service and DNS.

During the investigation of the first phase of this incident, we triggered a deployment of our DNS system, which performs an API call against our internal provisioning system and uses the result of this call to construct a zone file. However, this query requires a functioning DNS infrastructure to complete successfully. Further, the output from this API call verification was not adequately checked for sanity before being converted into a zone file. As a result, this deployment removed a significant amount of records from our name servers, causing the NXDOMAIN results we observed. The missing DNS records were restored by performing the API call manually, validating the output, and updating the affected zones.

Many of our servers recovered gracefully once DNS service began responding appropriately. However, we quickly noted that github.com performance had not returned to normal, and our error rates were far higher than normal. Further investigation found that a subset of our fileservers were actively refusing connections due to what we found out later was memory exhaustion, exacerbated by the spawning of a significant number of processes on during the DNS outage.

Total number of processes across fileservers 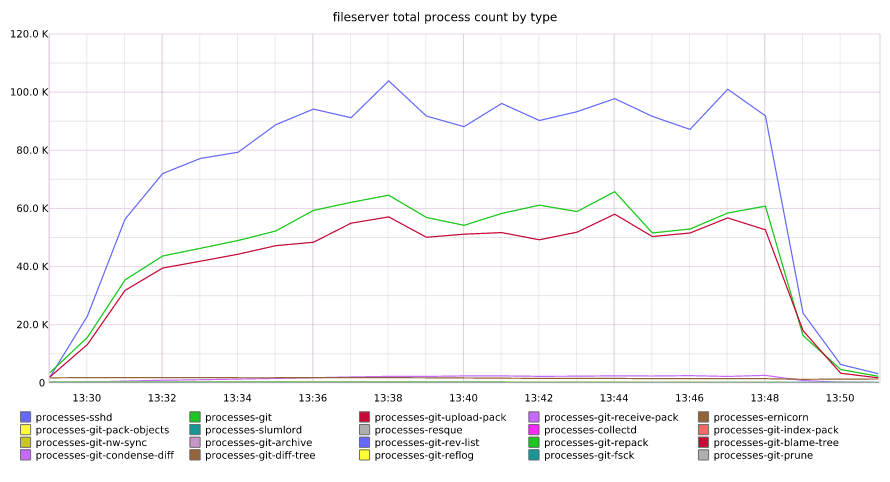 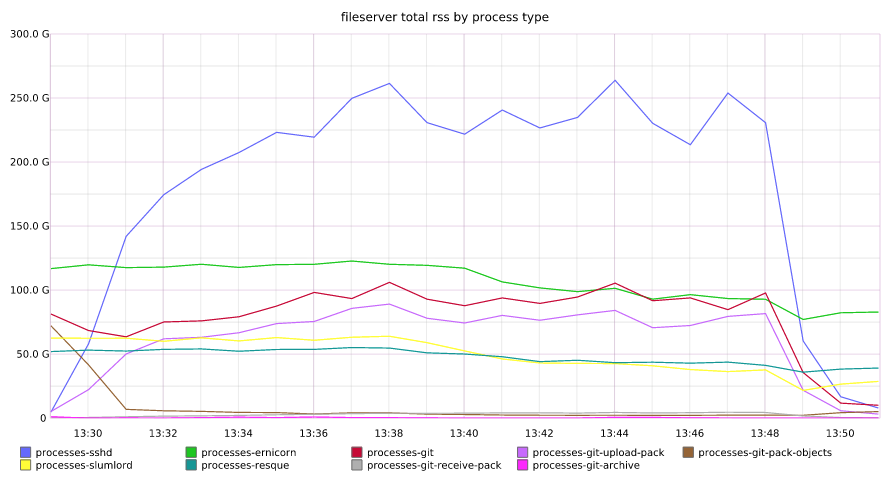 The failing fileservers began creating a back pressure in our routing layer that prevented connections to healthy fileservers. Our team began manually removing all misbehaving fileservers from the routing layer, restoring services for the fileservers that had survived the spike in processes and memory during the DNS event.

The team split up the pool of disabled fileserver, and triaged their status. Collectively, we found one of two scenarios existed to be repaired: either the node had calmed down ‘enough’ as a result of DNS service restoration to allow one of our engineers to log into the box and start forcefully killing hung processes to restore service, or the node had become so exhausted that our HA daemon kicked in to STONITH the active node and bring up our secondary node. In both of these situations, our team went in and performed checks against our low-level DRBD block devices to ensure there were no inconsistencies or errors in data replication. Full service was restored for all of our customers by 15:47 PM PST.

What we’re doing about it…

This small problem uncovered quite a bit about our infrastructure that we will be critically reviewing over the next few weeks. This includes:

We realize that GitHub is an important part of your development and workflow. Again, I would like to take a moment to apologize for the impact that this outage had to your operations. We take great pride in providing the best possible service quality to our customers. Occasionally, we run into problems as detailed above. These incidents further drive us to continually improve the quality of our own internal operations and ensure that we are living up to the trust you have placed in us. We are working diligently to provide you with a stable, fast, and pleasant GitHub experience. Thank you for your continual support of GitHub!