I am continually blown away by the staggering amount of work happening on GitHub. Every day, our users commit code, open and close issues, and make plans for their software…

I am continually blown away by the staggering amount of work happening on GitHub. Every day, our users commit code, open and close issues, and make plans for their software to take over the world. We track all of this activity and make the public data available via our API.

Over half a million individual events happen every day on GitHub. Here’s a look into the ever-expanding Octoverse in 2012. Since the beginning of the year, we’ve seen a doubling in activity, with pushes alone responsible for over 60% of the events in a given day. On a typical weekday, 10k people sign up for a GitHub account, and our users:

Looking over the past few years, the amount of people using GitHub is growing at an incredible rate; there are now 2.8MM GitHub users, which represents 133% growth in 2012 alone. Even more impressive is how much those users are doing on GitHub. In that same time period, the overall number of repositories increased 171% to 4.6MM. 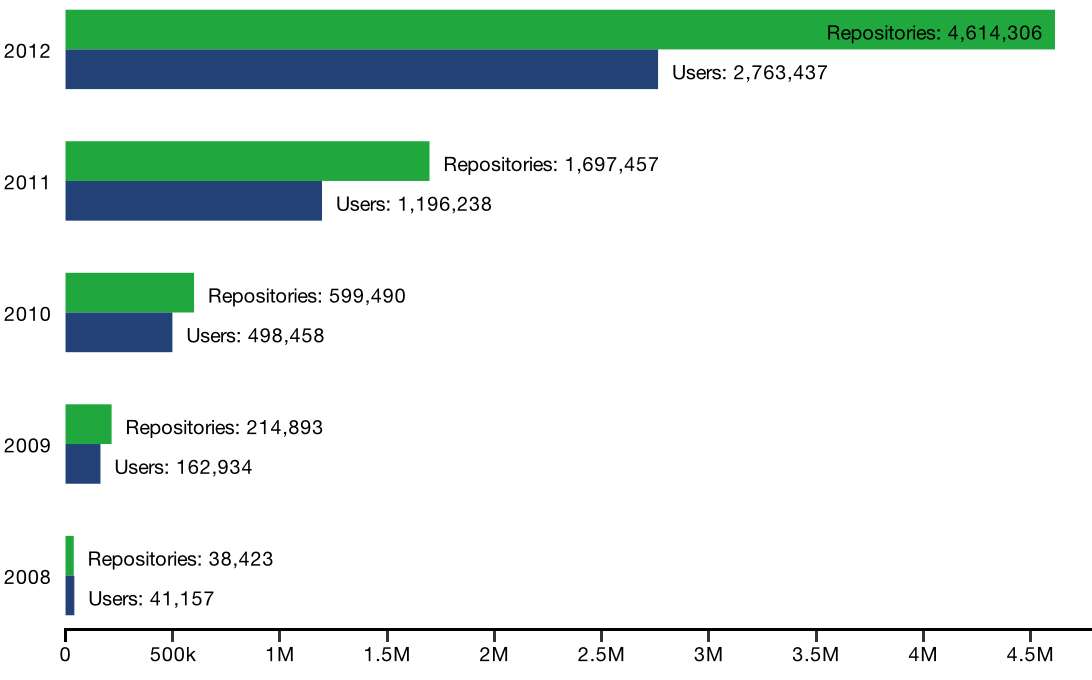 Since software is changing the world, it shouldn’t be surprising that it’s developed by people from all corners of the globe. While the United States is the most active country on GitHub.com, it accounts for only 28% of our traffic.

Stars are a way to keep track of repositories that you find interesting. These projects, all created this year, attracted the most stargazers:

It’s better to work together than to work alone. By developing software on GitHub, you’re making it easy for 2.8MM people to help you out. In the past year, these projects attracted the highest numbers of unique contributors:

Across commit messages, issues, pull requests, and comments, emoji is a vital part of GitHub’s daily workflow. Life, and our products, just wouldn’t be the same without it. When we looked at the popular emoji used on weekdays (green) versus those same emoji on weekends (blue), we saw the 🔥 🔥 🔥 is spreading.

The most popular emoji on the weekend paint a different picture; time for a 🍹 under a 🌴.

We believe GitHub is the best place to build software, but it wouldn’t be the same without you. Thank you for building, sharing and shipping. Thank you for proving that it’s better to work together than to work alone.

From the GitHub family to you, thanks. Next year is going to be even more amazing.