On Friday, November 30th, GitHub had a rough day. We experienced 18 minutes of complete unavailability along with sporadic bursts of slow responses and intermittent errors for the entire day.…

On Friday, November 30th, GitHub had a rough day. We experienced 18
minutes of complete unavailability along with sporadic bursts of slow
responses and intermittent errors for the entire day. I’m very sorry
this happened and I want to take some time to explain what happened,
how we responded, and what we’re doing to help prevent a similar
problem in the future.

Note: I initially forgot to mention that we had a single fileserver pair offline
for a large part of the day affecting a small percentage of repositories.
This was a side effect of the network problems and their impact on the
high-availability clustering between the fileserver nodes. My apologies
for missing this on the initial writeup.

To understand the problem on Friday, you first need to understand how
our network is constructed. GitHub has grown incredibly quickly over
the past few years. A consequence of that growth is that our infrastructure
has, at times, struggled to keep up with the growth.

Most recently, we’ve been seeing some significant problems with network
performance throughout our network. Actions that should respond in
under a millisecond were taking several times that long with occasional
spikes to hundreds of times that long. Services that we’ve wanted to
roll out have been blocked by scalability concerns and we’ve had a
number of brief outages that have been the result of the network
straining beyond the breaking point.

To solve this problem, we purchased additional switches to build what’s
called an aggregation network, which is more of a tree structure.
Network switches at the top of the tree (aggregation swtiches) are
directly connected to switches in each server cabinet (access switches).
This topology assures that data never has to move between more than
3 tiers: The switch in the originating cabinet, the aggregation switches,
and the switch in the destination cabinet. This allows the links between
switches to be much more efficiently used.

Last week the new aggregation switches finally arrived and were installed in
our datacenter. Due to the lack of available ports in our access
switches, we needed to disconnect access switches, change the
configuration to support the aggregation design, and then reconnect them to
the aggregation switches. Fortunately, we’ve built our network with
redundant switches in each server cabinet and each server is
connected to both of these switches. We generally refer to these as “A”
and “B” switches.

Our plan was to perform this operation on the B switches and observe
the behavior before transitioning to the A switches and completing the
migration. On Thursday, November 29th we made these changes on the B
devices and despite a few small hiccups the process went essentially
according to plan. We were initially encouraged by the data we were
collecting and planned to make similar changes to the A switches the
following morning.

On Friday morning, we began making the changes to bring the A switches
into the new network. We moved one device at a time and the maintenance
proceeded exactly as planned until we reached the final switch. As we
connected the final A switch, we lost connectivity with the B switch in
the same cabinet. Investigating further, we discovered a
misconfiguration on this pair of switches that caused what’s called a
“bridge loop” in the
network. The switches are specifically configured to detect this sort
of problem and to protect the network by disabling links where
they detect an issue, and that’s what happened in this case.

We were able to quickly resolve the initial problem and return the
affected B switch to service, completing the migration. Unfortunately,
we were not seeing the performance levels we expected. As we
dug deeper we saw that all of the connections between the access
switches and the aggregation switches were completely
saturated. We initially diagnosed this as a “broadcast
storm” which is one
possible consequence of a bridge loop that goes undetected.

We spent most of the day auditing our switch
configurations again, going through every port trying to locate what
we believed to be a loop. As part of that process we decided to
disconnect individual links between the access and aggregation switches
and observe behavior to see if we could narrow the scope of the problem
further. When we did this, we discovered another problem: The moment we
disconnected one of the access/aggregation links in a redundant pair,
the access switch would disable its redundant link as well. This was
unexpected and meant that we did not have the ability to withstand a
failure of one of our aggregation switches.

We escalated this problem to our switch vendor and worked with them to
identify a misconfiguration. We had a setting that was intended to
detect partial link failure between two links. Essentially it would
monitor to try and ensure that both the transmit and receive functions
were functioning correctly. Unfortunately, this feature is not
supported between the aggregation and access switch models. When we
shut down an individual link, this watchdog process would erroneously
trigger and force all the links to be disabled. The 18 minute period of
hard downtime we had was during this troubleshooting process when we
lost connectivity to multiple switches simultaneously.

Once we removed the misconfigured setting on our access switches we
were able to continue testing links and our failover functioned as
expected. We were able to remove any single switch at either the
aggregation or access layer without impacting the underlying servers.
This allowed us to continue moving through individual links in the hunt
for what we still believed was a loop induced broadcast storm.

In the course of our troubleshooting we discovered that our aggregation
switches were missing a number of MAC addresses from their tables, and
thus were flooding any traffic that was sent to those devices across
all of their ports. Because of these missing addresses, a large
percentage of our traffic was being sent to every access switch and not
just the switch that the destination devices was connected to. During
normal operation, the switch should “learn” which port each MAC address
is connected through as it processes traffic. For some reason, our
switches were unable to learn a significant percentage of our MAC
addresses and this aggregate traffic was enough to saturate all of the
links between the access and aggregation switches, causing the poor
performance we saw throughout the day.

We worked with the vendor until late on Friday night to formulate a
mitigation plan and to collect data for their engineering team to
review. Once we had a mitigation plan, we scheduled a network
maintenance window on Saturday morning at 0600 Pacific to attempt to
work around the problem. The workaround involved restarting some core
processes on the aggregation switches in order to attempt to allow them
to learn MAC addresses again. This workaround was successful and
traffic and performance returned to normal levels. 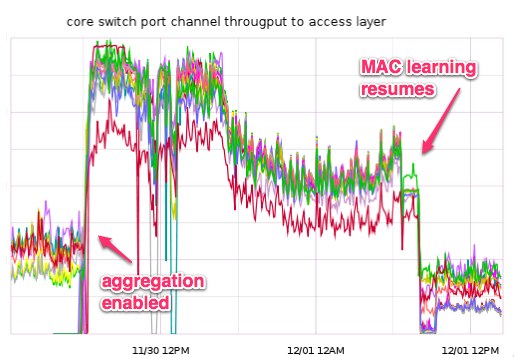 Where do we go from here?

We know you depend on GitHub and we’re going to continue to work hard
to live up to the trust you place in us. Incidents like the one we
experienced on Friday aren’t fun for anyone, but we always strive to
use them as a learning opportunity and a way to improve our craft. We
have many infrastructure improvements planned for the coming year and
the lessons we learned from this outage will only help us as we plan
them.

Finally, I’d like to personally thank the entire GitHub community
for your patience and kind words while we were working through these
problems on Friday.