Rebel: a Framework for Improving AppKit

In our last blog post, we revealed Mantle, our Cocoa model framework. Today, we're announcing Rebel, a framework for improving AppKit. Since you may recall our original TwUI announcement, the…

Since you may recall our original TwUI
announcement, the decision to
start using AppKit again bears some explanation.

For a while now, we’ve been collaborators on Twitter’s
TwUI, a popular UI framework for the Mac. TwUI
made it easy to build a modern layer-based application for OS X.

However, the AppKit improvements in Lion and Mountain Lion include substantial
fixes for layer-backed views. On Snow Leopard, layer-backed NSTextFields and
NSTextViews were almost unusable – now, most standard views behave sanely.
NSScrollView, in particular, no longer consumes an absurd amount of memory or
performs asynchronous tiling (so content no longer fades in while scrolling).

These fixes make TwUI less necessary, so we’re slowly migrating GitHub for Mac
back to be 100% AppKit, freeing up our development time to work on GitHub for
Mac instead of maintaining an entire UI framework alongside it.

As we move away from using TwUI, we will also become less active in its
development. We want to leave the framework in good hands, though, so if you’re
interested in helping maintain TwUI, please open an
issue and explain why you think you’d be
a good fit.

It’s Not All Peaches and Cream

Some significant
improvements
are only available on Mountain Lion. Even then, there are still some bugs
– silly things like horizontally scrolling NSTextFields ending up on half
pixels, or NSScrollView being unbearably slow.

Not to mention that many of its APIs are often difficult to use:

This is where Rebel comes in. Rebel aims
to solve the above problems, and whatever else we may run into.

There are fixes to the NSTextField
blurriness
and NSScrollView
performance. There are
iOS-like
resizable
images.
Let Rebel figure out whether you’re animating or
not.

Have you seen the username autocompletion popover? 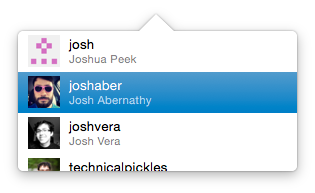 We want to make AppKit easy and enjoyable to use without rewriting it from the
ground up.

Rebel is currently alpha quality. We’re already using it in GitHub for Mac,
but we may still make breaking changes occasionally.

So, check it out, enjoy, and please file any
issues that you find!