GitHub for Mac is powered by TwUI, Twitter's open source, Core Animation-based UI framework for Mac. It's the same framework that drives Twitter for Mac. TwUI lets us create fast,…

We’ve made a lot of fixes and additions in our TwUI fork:

We’ve been working with the fine folks at Twitter to figure out the best way for us all to make TwUI more amazing.

They invited us to join forces.

What does it mean?

TwUI has a bright and glorious future.

All of our changes are now in the original TwUI repository. That includes a lot of bug fixes, HiDPI support, and our sweet new popover: 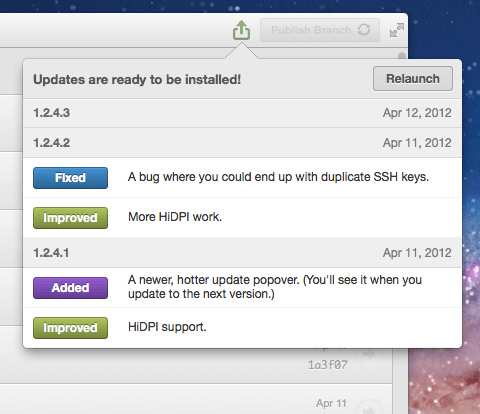 We’re excited to work with Twitter to make TwUI even more awesome.