Today, we're open-sourcing a library that we have been using at GitHub: Akavache. Akavache is an asynchronous, persistent key-value cache created for writing native desktop and mobile applications in C#.…

Today, we’re open-sourcing a library that we have been using at GitHub: Akavache.

Akavache is an asynchronous, persistent key-value cache created for writing native desktop and mobile applications in C#. Think of it like memcached for desktop apps.

What does that mean?

Downloading and caching remote data from the internet while still keeping the UI responsive is a task that nearly every modern native application needs to do. However, many applications that don’t take the consideration of caching into the design from the start often end up with inconsistent, duplicated code for caching different types of objects.

It’s built on a core key-value byte array store (conceptually similar to a Dictionary<string, byte[]>), and on top of that store, extensions are added to support: 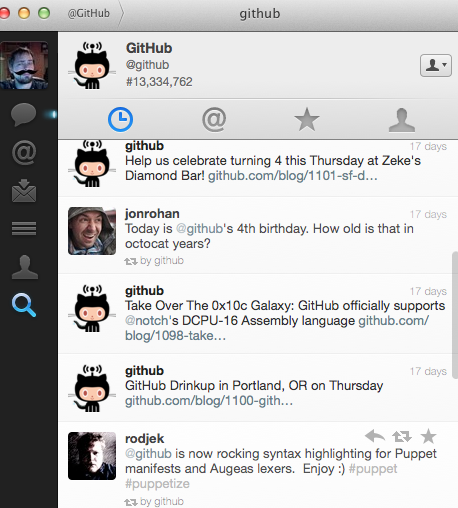 However, for the avatar images, you might have logic like, “Always load the cached image, but if the avatar is older than six hours, refresh the image.”

Akavache is non-blocking, via a library called the Reactive Extensions – any operation that could delay the UI returns an Observable, which represents a future result.

Akavache also solves several difficult concurrency problems that simplify UI programming. For example, in the image above, a naive cache implementation could end up loading the GitHub avatar icon multiple times if the requests were issued at the same time (which is easy to do if you try to load the avatar for each tweet). Akavache ensures that exactly one network request is issued.

Check out the GitHub Repository for more examples, and install the package via NuGet. Akavache is also used extensively in Play for Windows, a desktop client for Play, your employee-powered office DJ.