The first annual Octocat Dodgeball Tournament was held yesterday in San Francisco at the Mission Rec Center. 17 teams joined us for 4 hours of ball throwing fun, in the…

The first annual Octocat Dodgeball Tournament was held yesterday in San Francisco at the Mission Rec Center. 17 teams joined us for 4 hours of ball throwing fun, in the process raising $57,000 for charities.

We were even joined by our own little dancing octocat mascot.

And Tom showed up with some beats.

It was an epic day of hard core Dodgeballing matches.

Many teams came in uniforms, many putting quite a lot of effort into them. 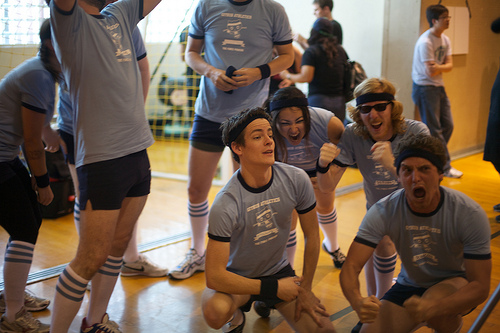 Hundreds of people came out to cheer everyone on, packing the bleachers of the rec center.

It was a great day for charities, too. We raised $3000 for Women Work Together and $1500 each for Aspire Public Schools, Autism Speaks, DonorsChoose.org, The Second Opinion, Delancey Street, IronMatt, UNICEF, Charity Water, Alameda Food Bank, HIFY, 826 National, Planned Parenthood, 826 Valencia, World Vision, the Boys and Girls Club and Komen for the Cure (who you can also support by buying one of our Pinktocat shirts, modeled here by @broccolini of our own GitHub Cheerleading Squad)

At the end of the day, after dozens of grueling matches, Heroku ended up winning the finals, securing not only $30,000 for their awesome charity, Heifer International, but more importantly and tragically, our coveted Dodgeball Octocat Trophy!

So congratulations to Heroku and to Heifer International for their amazing win, and a huge thanks to the hundreds of players and cheering supporters who came out to support us and made this day such a huge success. We hope to see even more people next year.