A few months ago I started talking with the Pragmatic Programmers about doing some screencasts. At the time, I was doing the GitCasts series and was considering branching out into…

A few months ago I started talking with the Pragmatic Programmers about doing some screencasts. At the time, I was doing the GitCasts series and was considering branching out into other stuff and the Programmers just started their screencasting wing.

Mike there thought it might be a good idea for me to do a couple screencasts about GitHub itself. I was not working for GitHub when I started these, but I knew the website well and had done some little things for them (like Gist). When I started working at GitHub full time, everything got crazy and the project took a while to complete. However, today Pragmatic Programmers released two episodes of the “Insider Guide to GitHub“ 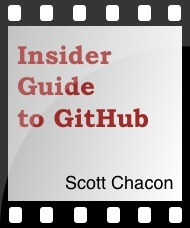 which cover most common things people do with GitHub. The first episode (30 min) is completely free, so please encourage your friends to watch it if you find it helpful. It covers how to :

The second episode is $5, and goes into more advanced stuff like the GitHub gem, the APIs and post-receive stuff, an example Capistrano deployment and a few other things.

Mike Clark edited them all and did all the graphics, which is why they look so nice. He spent a ton of time on these for me, including the free one and I think it was super cool of them to let me give away the first one for free.

If you want to see me do a screencast explaining other things about Git or GitHub, let me know and I’ll get a third episode out there if I get enough suggestions.